This website requires certain cookies to work and uses other cookies to help you have the best experience. By visiting this website, certain cookies have already been set, which you may delete and block. By closing this message or continuing to use our site, you agree to the use of cookies. Visit our updated privacy and cookie policy to learn more.
Home » Biden Signs $1.5T Omnibus Spending Bill, With Good News for Highways
BuildingsEnvironmentTransportationFinanceGovernmentContractor Business Strategy
Infrastructure Spending

President Joe Biden has signed into law a $1.5-trillion omnibus spending package that opens the door for state transportation agencies—and eventually construction companies—to gain access to the full funding increases for highway and transit programs authorized in the Infrastructure Investment and Jobs Act.

The wide-ranging legislation, which Biden signed on March 15 in a White House ceremony, also includes increases over 2021 levels for many key construction and infrastructure programs, though not across the board.

In addition the omnibus package funds all federal departments and agencies through Sept. 30, the end of the 2022 fiscal year, thus averting a threatened government shutdown.

Perhaps the new law’s most crucial construction element is that it finally opens the door to the full 2022 amounts that the IIJA provided for highway and transit programs that are distributed among states by formula.

After the IIJA was enacted last Nov. 15, construction and transportation groups grumbled that Congress wasn’t able also to pass full-year 2022 appropriations measures by the same date. The resulting series of stopgap spending bills forced highway and transit formula programs to operate at lower 2021 levels and only at pro-rated sums for the brief duration of the stopgaps.

That meant state transportation departments were barred from immediately accessing about 20% of the IIJA’s full-year 2022 funds. 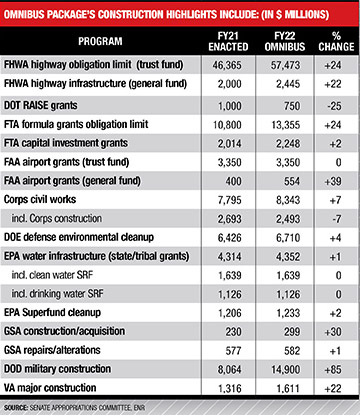 “It’s go time,” Dennis D. Truax, American Society of Civil Engineers President said in a statement. “This bill prevents the need for another continuing resolution this year and allows all funds from the infrastructure bill to be spent rather than being limited to last year’s levels."

The American Public Transportation Association also welcomed the omnibus. APTA said combining the 2022 omnibus and IIJA transit funding equals $20.5 billion, a boost of $7.6 billion, or 58%, from the enacted 2021 level.

The omnibus also removes the stopgaps’ block on all new federal programs, including those the IIJA creates. For highways, it unfreezes the carbon-reduction and Promoting Resilient Operations for Transformative, Efficient and Cost-saving Transportation (PROTECT) grant programs. IIJA has $6.4 billion for the transportation carbon-reduction program and $8.7 billion for PROTECT over five years.

For transit, the bill clears the way for the All Stations Accessibility Program, funded at $1.75 billion over five years, to make rail transit stations accessible to persons with disabilities.

Along with increases in Dept. of Transportation programs supported by the highway, airport and airway trust funds, the omnibus also gives a boost to some DOT accounts that draw from the general fund.

Among non-DOT programs, one of the biggest spending jumps is in military construction. DOD construction would soar 85% in 2022, to $14.9 billion.

On the other hand, the Environmental Protection Agency’s main water infrastructure program, state and tribal assistance grants, will see its appropriations edge upward only 1%, to $4.4 billion.

Within that total, EPA’s mainstay clean water and drinking water state revolving funds have their budgets frozen at 2021 levels of $1.6 billion and $1.1 billion, respectively.

FHWA Releases First Batch of $7.3B in IIJA Resilience Funds