Allapattah, a working class, majority Latino neighborhood in Miami, is bounded by convenience—a hospital, metro stations, an art museum, highways for easy access to downtown, the beach and other points of interest—which makes it a magnet for development, pushing prices up, and residents and businesses out. Perhaps Allapattah’s most convenient feature is its relatively high elevation in a flat, low-lying, increasingly flood-prone city, making it a prime target for the climate gentrification driving development there and in other Miami neighborhoods like it.

“It’s understandable that people are going to want to move inland, but do we need to take out the locals to do that?” asks Mileyka Burgos-Flores, executive director of the Allapattah Collaborative CDC. She describes the community as the heart of little Santo Domingo, referencing the neighborhood’s Dominican influences. But in recent years, new developments have been growing in the neighborhood, with rental prices out of sync in an area where median income is below $30,000.

Allapattah is the “heart and soul” of understanding how climate gentrification is shaping up in the city, says Jesse M. Keenan, associate professor of real estate at Tulane University’s School of Architecture, who co-authored a 2018 paper that coined the term. “Allapattah is really the next battleground.”

But the Allapattah community is ready to fight back. The Allapattah Collaborative CDC, working with the coalition group Public Land for Public Good, is trying to model what they’d like to see developers do as they present ideas for a city-owned 18-acre space known as the GSA lot. The collaborative canvassed on the street, held online and in-person town halls, and conducted outreach in schools, churches and barber shops to hear what the community wants developed on the lot, says Burgos-Flores. The coalition is working with the city to make sure the feedback captured in a report is reflected in the project RFP, which has yet to be issued, she adds. 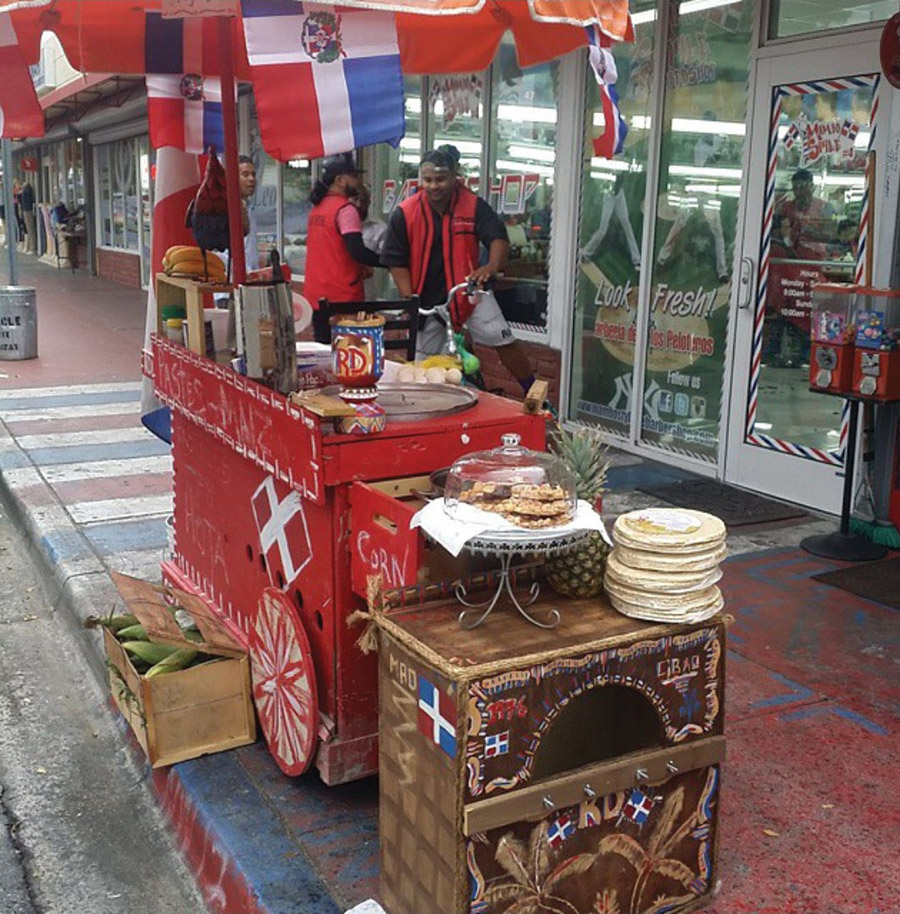 The shadow of a development called Magic City, in the community of Little Haiti, looms over Allapattah and neighborhoods like it. The Magic City Innovation District is a multi-phase, billion-dollar mixed-use project spread across almost 18 acres in Little Haiti, another historically under-resourced community home to a large number of immigrants, Northeast of Allapattah. The Magic City development is frequently pointed to as the poster child for gentrification in Miami.

Its existence, with final approval by the Miami City Commission given in July 2021, is owed to what Keenan describes as a “fluke in the zoning code,” called a Special Area Plan (SAP), which allows for master planning of properties 9 acres or greater, enabling it to forgo zoning requirements related to features such as building height or matching a neighborhood’s existing style and color. Magic City “is beyond out of character,” says Marleine Bastien, executive director of community advocacy group Family Action Network Movement.

“Little Haiti is a dynamic, culturally inclusive and exciting place with an inspiring story,” adds Bastien, describing how Haitian refugees transformed the neighborhood beginning in the 1980s. Bastien herself came there in 1981, working as a paralegal and advocate at the Haitian Refugee Center, where she got to know the people of Little Haiti and how hard so many of them worked to secure a home.

Magic City’s residential towers will offer no low-income housing, although that was originally part of the planning discussions. Instead, the developers will provide $31 million—with the first $3-million installment delivered in March—to the city-run Little Haiti Revitalization Trust, intended to be used for community projects including affordable housing initiatives, small business assistance and parks construction.

Bastien and other groups are trying to avoid déjà vu with another proposed SAP, Sabal Palm Village, a 25.97-acre mixed-use development proposed for the neighborhood. At the planning board’s insistence, developer SPV Realty met with community groups to discuss their needs, ultimately leading to a redesigned project with shorter towers, among other concessions. Bastien says community groups continue to push for changes, especially for both on and off-site affordable housing.

“There are models where the community and the development can live side by side,” says Bastien, “it is possible. And that’s what we are advocating for: development with the people, not without them.”

Smarter Windows Will Enable Arena to Let in the Light

Corps Proposes $4.6B Plan to Steel Miami for Storm Surge