PROJECT OF THE YEAR

Egypt’s Lake Manzala, on the northeastern edge of the Nile Delta and the tip of the Sinai Peninsula, has a long and storied history. For centuries, it has provided a steady supply of fish—and a livelihood—for local fisherman. Over the past several decades, however, an unpalatable brew of industrial waste, sewage, agricultural runoff and pesticides coming from Cairo, Port Said and surrounding areas have polluted the lake and decimated fish and wildlife populations.

At a time when Egypt is facing significant water scarcity and what the United Nations calls a potential “water crisis” by 2050, the country’s government is making a concentrated effort to address both the environmental degradation of Lake Manzala and concerns about water scarcity. Additionally, the government is working to develop the Sinai Peninsula—currently underpopulated—into an appealing place to live and work.

The efforts have included building desalination plants and other treatment plants, including the recently completed Al Mahsama Water Reclamation plant (an ENR Global Best Project in 2020).

Located just east of the Suez Canal and expected to go fully online in December 2021, the new plant has the capacity to treat more than 2 billion cu m of wastewater annually, enough to irrigate 1,400 sq km of agricultural land in the Sinai Peninsula. It will also return treated clean water to Lake Manzala. 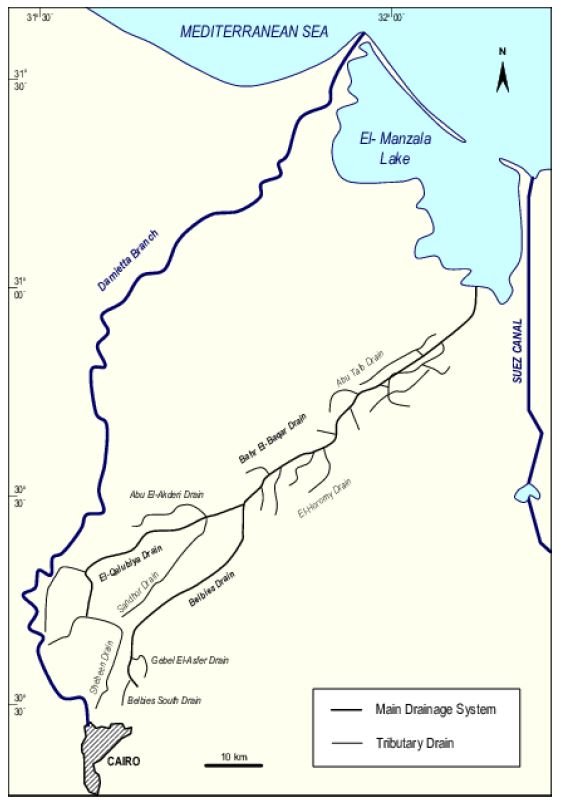 This year, the Guinness Book of World Records recognized the 650,000-sq-ft Bahr Al Baqar facility as the largest wastewater plant in the world, based on the sheer amount of water that will travel through it. The plant processes 64.8 cu m of water per second, enough to provide the average annual use for one resident in less than 9 minutes. It also is the world’s biggest sludge treatment facility, Guinness says.

The $739-million fast-track project was completed on time and on budget and meets goals established in Egypt’s 2030 National Agenda as well as the United Nation’s Sustainable Development goals, which include ensuring access to clean water and sanitation for all people. “This is the kind of project that touches the [daily] lives of people” and provides a real, tangible benefit, says the project’s lead consultant Hazem Saleh, water treatment principal at Khatib & Alami in Dubai. 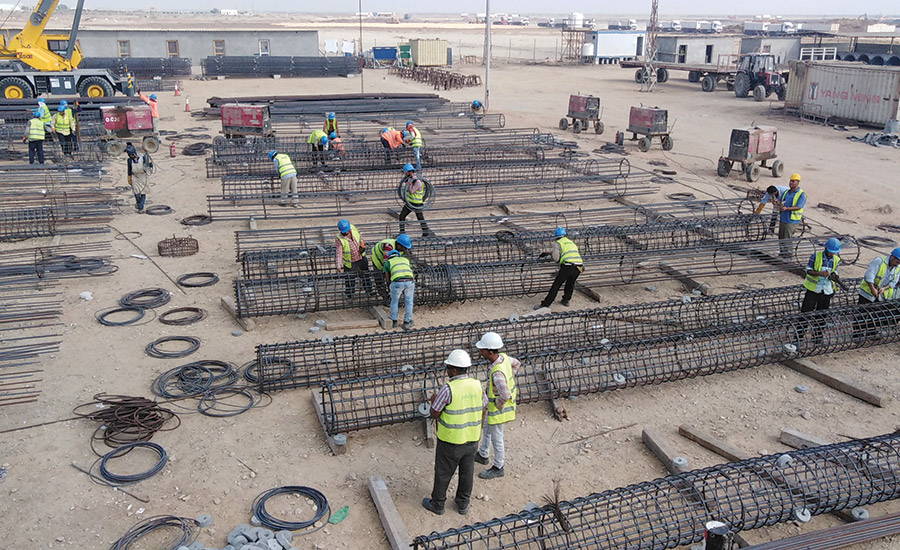 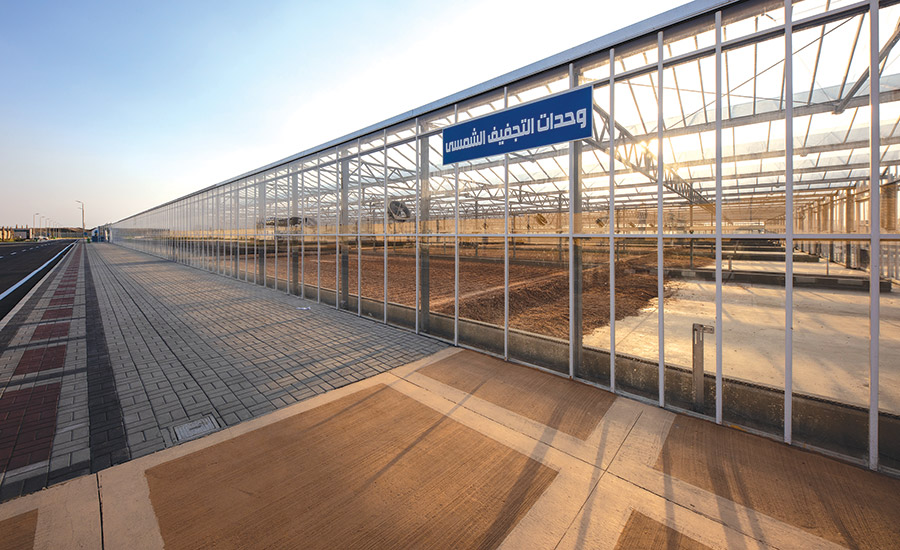 The project employed more than 6,000 workers and challenged the ingenuity of the project team to come up with solutions. Left, a few workers sort through materials on site. Right, a frame rises for the solar sludge-drying unit, the first in Egypt and the largest in the world.
Photos courtesy Arab Contractors Co.

The Problem and a Solution

Waste and wastewater from the region enter the lake via the 106-km Al Baqar drainage canal, which has the dubious distinction of being one of the most polluted drainage systems in the country, according to a 2018 report from Port Said University.

The drain was built in 1914 to allow a small amount of agricultural runoff to enter the lake, but it was never intended to receive the level of waste and wastewater that now passes through it. Although much of the water that leaves the drain has traditionally been used for agricultural irrigation, the quality of that water has worsened. Multiple studies have shown that pollution from the drain has affected not only Lake Manzala’s water quality but public health as well. 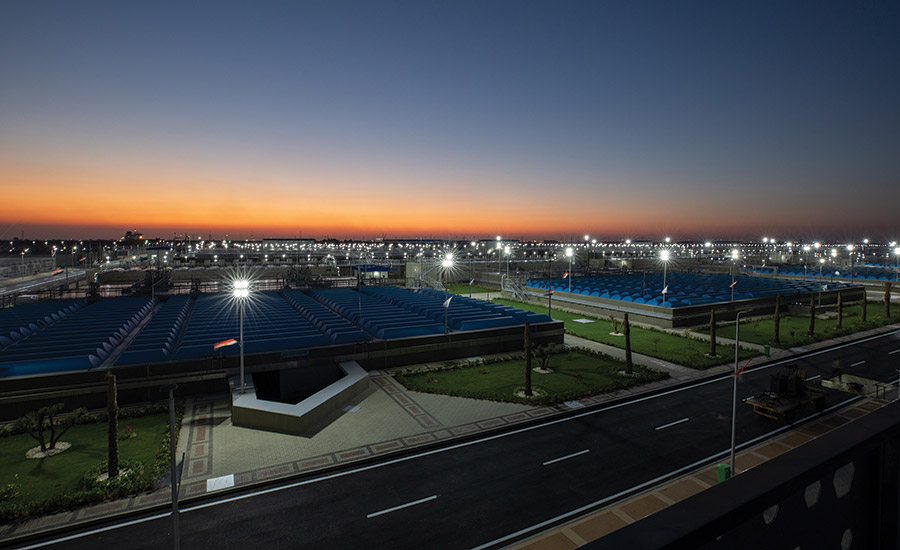 Egypt is changing the landscape of the Sinai Peninsula at a brisk pace. The Bahr Al Baqar water treatment plant, pictured here at dusk, is one of several planned as part of the country’s development plan for the peninsula.
Photo courtesy Arab Contractors Co.

The Bahr Al Baqar treatment plant’s main goal is to repurpose the water coming from the drain to be usable for irrigation along the Suez Canal. As a result, the amount of water needed for drinking water supplies will be reduced.

“We have to accept that our water resources are limited, so we have to focus on the optimum use of such resources…. We’re working to save two billion cubic meters that used to get wasted in the sea,” Egyptian President Abdel Fattah El-Sisi said at the inauguration ceremony Sept. 27.

Water from the drain will be treated in the new plant, then distributed through a network of tunnels that cross under and alongside the Suez Canal, and used primarily for irrigation.

The plant has four water treatment lines with a daily processing capacity of 1.25 million cu m each, with 5.6 million cu m/day used for agricultural irrigation. It is equipped with advanced processes for pumping raw water, coagulation, flocculation, decantation, filtration and supplemental ozone disinfection.

For the construction and design team, the project presented a daunting challenge: to build the world’s largest water treatment plant in under 24 months during COVID-19.

“The project duration was very tight, but the [strong] coordination within our team and with our partner Orascom has led to the completion of the project” on time, Sayed Farouk, chairman & CEO of The Arab Contractors Co., part of the joint venture construction team, says.

Construction began in September 2019 and was completed in May 2021. During that time, more than 6,000 workers, working in three different shifts per day, logged more than three million worker-hours. Experts from nine countries communicated virtually and used BIM modeling to keep the project on track. Because the work involved crossing the Suez Canal, which remained operational, delivery of materials and supplies had to be carefully coordinated, says Benjamin Thompson, a spokesman for Khatib & Alami. 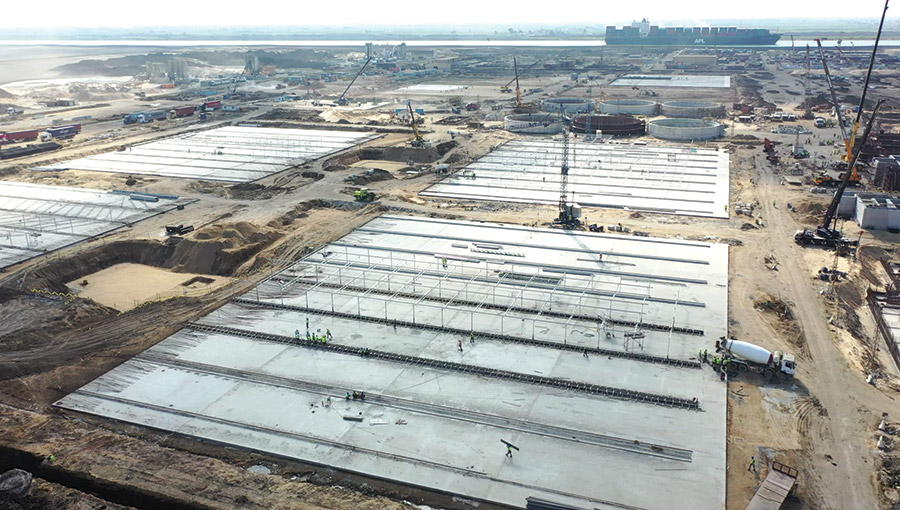 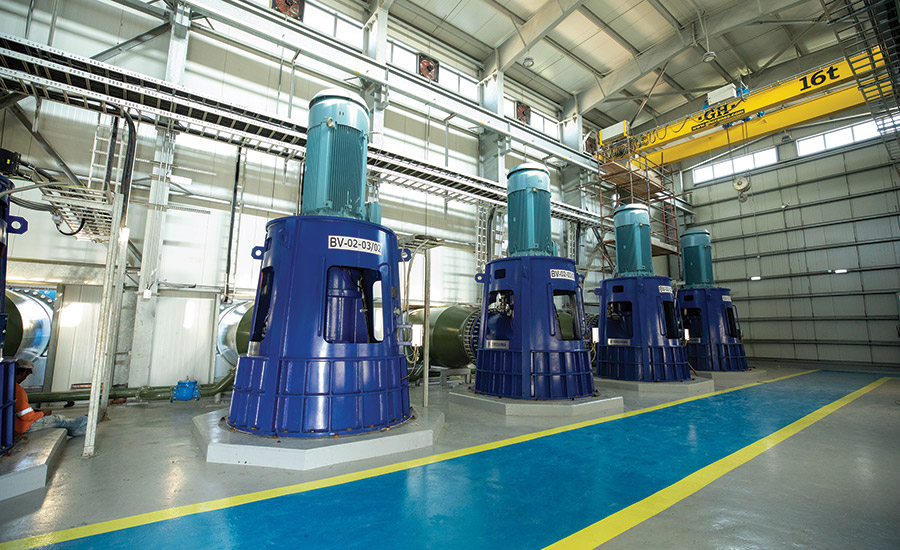 The project team suggested the location of the facility be moved to avoid losing arable land to the buildings. That required placing piling under the concrete foundation (left). At right, the intake pumps bring in polluted water from the drain.

Tarek Amin, board member for the construction joint venture, says the project team worked to develop solutions that fit clients’ needs. “This was not a one-size-fits-all” project,” he says. “We customize our solutions in order to fit every case.”

For example, the original site earmarked for the facility was on the west side of the Suez Canal, but because that land had the potential to be arable, the team suggested building on the east side instead.

That in itself presented challenges, since the sandy soil was not conducive to supporting a large structure. To get around that, the construction team used 6,500 80-cm-by-100-cm construction piles to stabilize the soil so that it could support the facility’s foundation slabs.

Additionally, the team installed 16,000 sq m of solar drying units to dry the sludge coming out of the plant’s centrifuge by an additional 50%. “We are using very little power because we are using the sunlight,” says Ehab Gerges, joint venture project director. That, in turn, reduced the sludge drying area requirements and the plant’s environmental footprint.

The solar drying system is the first to be installed in Egypt and is one of the largest of its kind in the world. Most of the dried sludge will be reused as fertilizer or for industrial purposes, Gerges says.

The plant also serves another purpose. The Egyptian government is concerned that Cairo and remote areas in Sinai could be vulnerable to attack from neighboring countries because of the lack of development on the Sinai peninsula. The new project fits into the government’s overall plan to develop the peninsula and make it livable.

Hazem Saleh, project lead consultant, notes the treatment plant can serve as a model for future, similar projects and that the exchange of information about technical innovations can only help further the industry. The project team is currently working on another mega water project not far from the Bahr Al Baqar treatment facility.

The new plant, an agricultural wastewater treatment plant, will be even larger than Bahr Al Baqar. Saleh says the team will continue to use lessons learned from Bahr Al Baqar on future projects. “We live on one planet…. We do not want to complicate life for people; we want solutions that are easy, sustainable, replicable and can be done,” he says.