The Hudson Pacific facility will be the first in two decades

Hudson Pacific Properties and Blackstone unveiled plans to develop the first large-scale purpose-built studio development in Los Angeles in more than two decades. Dubbed Sunset Glenoaks Studios, the 240,000-sq-ft, 10-acre project will house seven stages, ranging from 15,000 to 21,000 sq ft with 35-ft or 40-ft clear heights. The facility will also include nearly 120,000 sq ft of stage-adjacent support space, as well as offices, a large mill and parking. Construction is targeting LEED certification. Operations will be 100% carbon neutral with advanced waste, water and energy-use reduction programs. Construction is expected to complete in the third quarter of 2023 with a total investment of between $170 million and $190 million. The project was announced after Gov. Gavin Newsom approved including $150 million in incentives for newly constructed or renovated film facilities. The studio will be the fourth owned by Hudson Pacific and Blackstone funds under the Sunset Studios brand.

— 56 —
The NAIOP CRE Sentiment Index for September 2021. The sentiment is based on a 100-point scale. Its current position above 50 indicates that respondents expect favorable conditions for commercial real estate over the next 12 months. The Index is higher than at any point since the COVID-19 pandemic began and has returned to the level observed in March 2019. 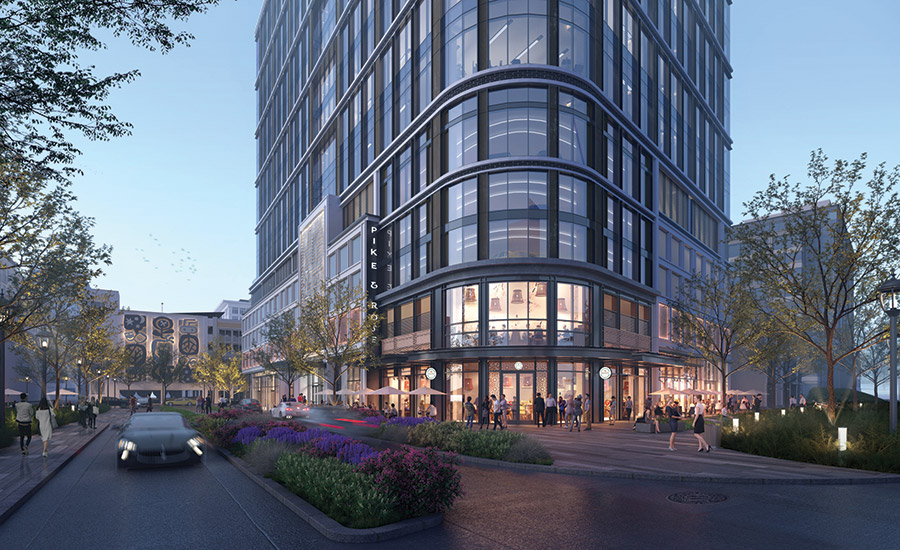 Federal Realty Investment Trust expects to break ground by the end of the year on its 915 Meeting Street project in North Bethesda, Md. Choice Hotels International has  signed a long-term lease to occupy 105,000 sq ft of the new 276,000-sq-ft office building. The project is part of Federal Realty’s Pike and Rose development. Scheduled for completion in late 2023, the 16-story building will feature 9,600 sq ft of ground-floor retail. Designed by Gensler, the project is targeting LEED Gold certification.

Alexandria Real Estate Equities announced it will develop, construct and operate a new corporate headquarters and core research and development facility for Moderna at its Alexandria Center at One Kendall Square development in Cambridge, Mass. The 462,000-sq-ft facility will be “the most sustainable laboratory building in Cambridge,” according to Alexandria Real Estate Equities, and is designed to operate as a net-zero-energy commercial laboratory facility. The building, which is targeting LEED Platinum Core & Shell, LEED Zero Energy and Fitwel certifications, will rely on ultra-efficient mechanical and envelope systems, geothermal energy as its primary heating source, and on- and off-site renewable energy. In addition to including space for research and development, the planned site will integrate scientific and non-scientific spaces to drive collaboration and innovation as well.

Corporate Office Properties Trust announced it will construct a two-building campus for Northrop Grumman Corp. at its Redstone Gateway development in Huntsville, Ala. The $103-million project will create a total of 263,000 sq ft of space. Both buildings are expected to deliver in the second half of 2022. Upon completion, Redstone Gateway will consist of 2.2 million sq ft of space near the U.S. Army’s Redstone Arsenal outpost.