Ford Will Spend $11.4B on Tennessee, Kentucky EV Plant Projects

The first project will be a $5.6 billion “mega campus” named Blue Oval City in Stanton, Tenn., which Ford says will be one of the largest auto manufacturing campuses in the U.S. The 3,600-acre complex will include an assembly plant where Ford will produce electric F-Series pickup trucks, plus an electric vehicle battery plant by the Ford-SK joint venture BlueOvalSK, which will supply the vehicle facility

The campus will also include facilities for suppliers, an on-site wastewater treatment plant and recycling facilities that the Dearborn, Mich.-based automaker says will help the assembly plant be carbon neutral and send no waste to landfills when fully operational. Ford aims to start plant production in 2025.

“We are now moving to deliver breakthrough electric vehicles for the many rather than the few,” Ford CEO Jim Farley said in a statement.

Tennessee Gov. Bill Lee said on Sept. 28 that the state offered the companies $500 million in incentives to build the campus. The state legislature is set to vote on the incentive package on Oct. 28.

Plant construction will come amid a larger push for electric vehicles and associated infrastructure in Tennessee. In January, the Tennessee Dept. of Environment and Conservation and the Tennessee Valley Authority signed an agreement to spend an estimated $20 million for a network of fast charging stations every 50 miles along interstate corridors and other major highways in the state

Ford isn’t the only automaker to plan EV production in Tennessee. An $800 million expansion at Volkswagen’s Chattanooga assembly plant is set to begin producing the German automaker’s ID Crozz electric SUVs starting in 2022. Volkswagen is also required to invest $2 billion in zero-emissions vehicle charging infrastructure as part of its settlement with the US Environmental Protection Agency of the company’s past vehicle emissions scandal. 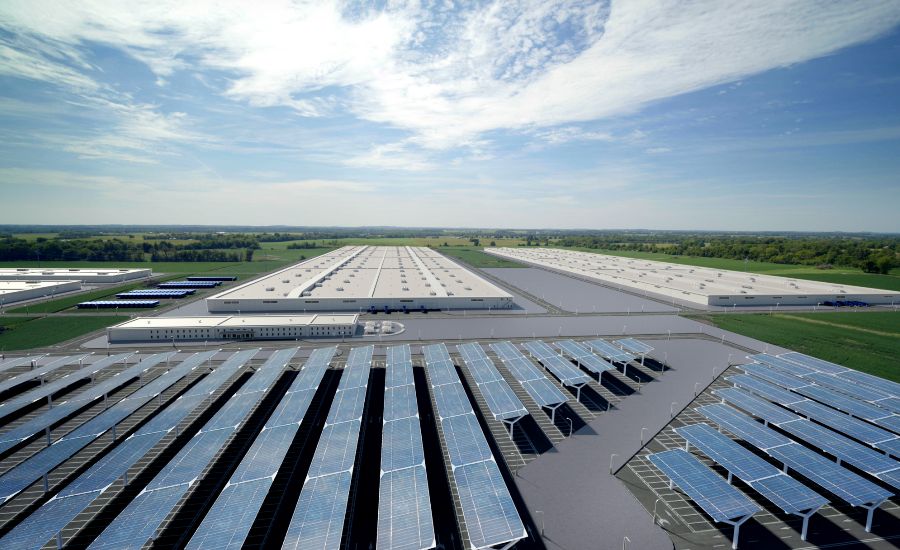 The second upcoming BlueOvalSK project is the $5.8 billion construction of a pair of battery plants in Glendale, Ky. Ford says the 1,500-acre facility will supply its other North American Ford and Lincoln EV assembly plants. Those battery plants are also slated to begin production in 2025
Image:Ford

“This is the single largest investment in the history of our state and this project solidifies our leadership role in the future of the automotive manufacturing industry,” Kentucky Gov. Andy Beshear said in a statement.

The announcement of the new plants comes just months after SK Innovation reached a deal with LG Energy Solution in a dispute over trade secrets. As part of the settlement, SK Innovation agreed to pay LG $1.8 billion in cash and future royalties. The deal allows SK Innovation to resume construction of its $2.6 billion battery plant outside Atlanta.

EVs may soon see a surge of support from governments.

The $1.3 trillion infrastructure bill pending a vote in the House would include $7.5 billion for EV charging infrastructure, particularly in less wealthy areas that have not seen as much development.

On Sept. 30, the governors of Illinois, Indiana, Michigan, Minnesota and Wisconsin signed an agreement to collaborate on EV infrastructure as the Regional Electric Vehicle Midwest Coalition. The states plan to work together to leverage public and private investment as they transition infrastructure to support EVs, also with an eye on historically disadvantaged communities.