This website requires certain cookies to work and uses other cookies to help you have the best experience. By visiting this website, certain cookies have already been set, which you may delete and block. By closing this message or continuing to use our site, you agree to the use of cookies. Visit our updated privacy and cookie policy to learn more.
Home » Replace/Upgrade Pier 2 at Military Ocean Terminal Concord (MOTCO)
CaliforniaCalifornia Construction ProjectsBest Projects2021
Best Projects

Built during World War II, the Military Ocean Terminal Concord (MOTCO) is one of only two ship loading and offloading munitions facilities in the country. The upgrade of Pier 2 for container crane operations overcame multiple challenges. The timber pile-supported pier had been built to handle munitions without using containers, which made it unsuitable for current uses. To replace Pier 2, the team demolished 159,000 sq ft of pier structure and removed 4,500 timber piles and 254 concrete piles. Workers drove almost 800 new octagonal concrete piles and 134 square concrete piles and used about 10,000 yd of concrete and 1,400 tons of reinforcing steel.

The project team also renovated the east trestle, built a new west trestle and operations building and removed munitions and explosives of concern as well as unexploded ordnance. All work was done around active military operations—including explosives handling and ship loading—and adjacent to other construction projects. Despite the project’s hazardous nature, the team completed all work on time, within budget and with zero Kiewit/Manson recordable safety incidents.

Working on an active Army base presented significant challenges. Tight security protocols required verification of U.S. citizenship and advanced background checks for every person entering the base, including all suppliers bringing materials on site. 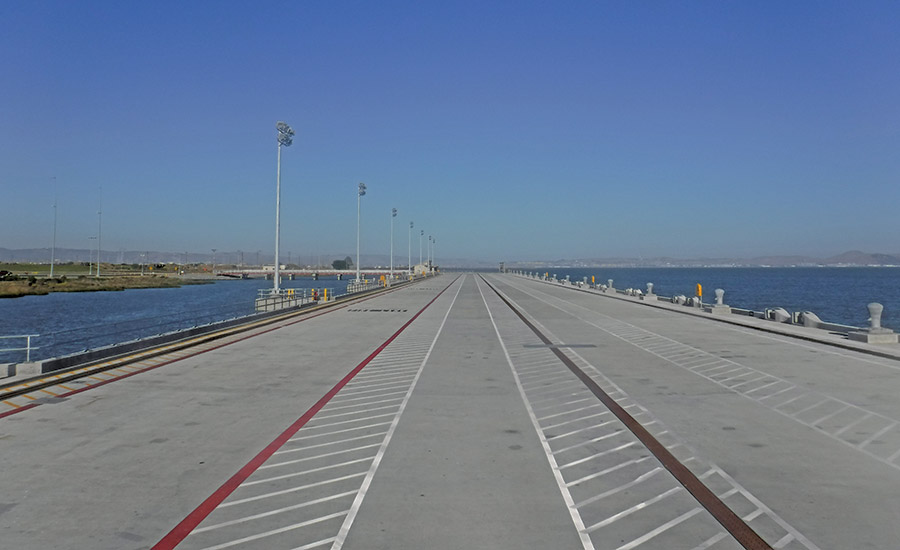 During demolition, the team found hundreds of bird nests underneath the pier that could not be destroyed if they contained eggs. Waiting for the eggs to hatch and the nests to empty would have delayed the project by weeks, so the team and its onsite biologist collaborated with the government to fast-track approval of a nest relocation permit. Close collaboration allowed for permit approval in a single day, preventing any delays.

The team also developed an innovative solution for building the new west trestle. The water near the trestle was too shallow to accommodate a barge to work from, and the project’s permits would not allow a trestle to be built on temporary piles. So crews first drove the permanent concrete piles, then built the temporary trestle from the land out on top of the permanent piles.