But while multimodal convenience was a fundamental goal, the six-year, $33.2-million project had to be carried out without affecting the adjacent 101 freeway and other infrastructure at the site.

Widening on the project’s northern side had to connect to the existing El Monte Busway terminus on a transverse and vertical interface. Because of the  large footprint of the underlying subway tunnels and foundation clearance requirements, the project team developed an unusual underground “bridge” footing to support columns for the widened busway bridge. These footings were post-tensioned pile caps that span the tunnels, supported by 36-in.-dia to 96-in.-dia cast-in-drilled-hole piles that extend up to 90 ft deep. Potential foundation conflicts with critical elements in the plaza garage were resolved via an innovative design that placed the elevator tower beyond the existing structure. 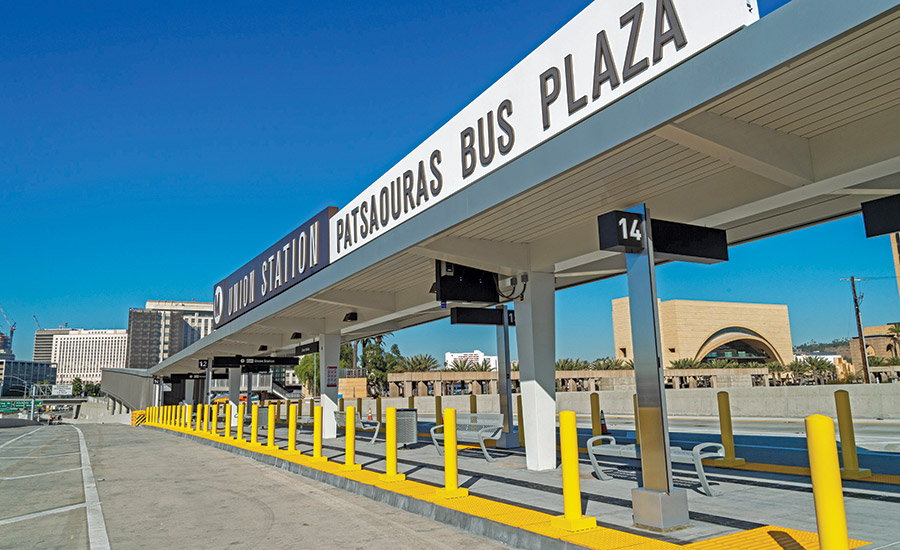 The construction phase brought its own challenges, with scheduled activities rearranged to accommodate investigations into human remains and archaeological artifacts unearthed at the site as well as the discovery of undocumented underground foundations from long-ago buildings.

Falsework for the pedestrian bridge was designed as a suspended system hovering over the El Monte Busway.

The unconventional construction technique was implemented after the project team noticed significant movement of the busway during normal operations. Pouring concrete via the suspended falsework system provided superior quality and ensured full structural integrity. The design incorporates customized, perforated stainless-steel panels, some of which move with the wind to create a surreal experience of sounds, shadow movement and visual moiré patterns.