This website requires certain cookies to work and uses other cookies to help you have the best experience. By visiting this website, certain cookies have already been set, which you may delete and block. By closing this message or continuing to use our site, you agree to the use of cookies. Visit our updated privacy and cookie policy to learn more.
Home » DFW Airport Module Move Is First of its Kind in the Nation
Texas & Louisiana Construction NewsConstruction methodsTransportation

Six prefabricated modules forming an 80,000-sq-ft new concourse have rolled into place at Dallas-Fort Worth International Airport. Delivered  on self-propelled modular transporters  between Aug. 26 and Sept. 9, the modules are a first of their kind for North American airports.

The modules, complete with metal panels and glazing, were transported a quarter mile across the airfield, including a 90° turn, from the prefabrication yard to the site every other night by three SMPTs moving in parallel at up to 5 mph.

“It took about 45 minutes or less to move from the fabrication yard across the runways, under the [Skylink people mover guideway], between columns,” says Thomas Haag, national director of aviation with the Walsh Group. Each module was jacked up 8 ft and set in place adjacent to Skylink.

The largest module weighs 550 tons and is 86 ft x 86 ft x 33 ft. Each module was prepped onto the SPMTs in the morning and moved that night during a six-to-eight-hour window.

Learn how a team moved an entire 80,000-sq-ft concourse into place in 10 days, navigating an active airfield.

But the seemingly straightforward operation included vast amounts of planning and engineering. The team worked closely with SPMT provider Mammoet.
“It’s like you had two sets of brains going,” says Michael Lloyd, principal with the architect PGAL. “We designed the terminal as you would for a final outcome, and a really traditional approach. The end result is paramount for the passenger experience and performance for the airport and airlines. But how to construct in a modular manner? We designed a frame system that would support the building but also had to think about it as a repetitive system … all the while thinking ahead of how it will be lifted in place and not flex uncontrollably.”

Vivek Gurjar, senior associate with Henderson Rogers Structural Engineers, says the modules were designed for three conditions—at the prefabrication yard, for transport, and for final setting. Engineers considered numerous factors, including how much each module weighed, their heights based on underside clearances required by Mammoet, configuration of the SPMTs, heights of temporary plinths supporting the modules in the fabrication yard and even elevation differences in the airfield pavement.

Gurjar notes that on average,  there were 15,000 lb on each of the 64 wheels of each SPMT during the moves.

Blake Christian, the team’s program manager, says each move navigated a “forest of columns” with tight tolerances and clearances from every angle. 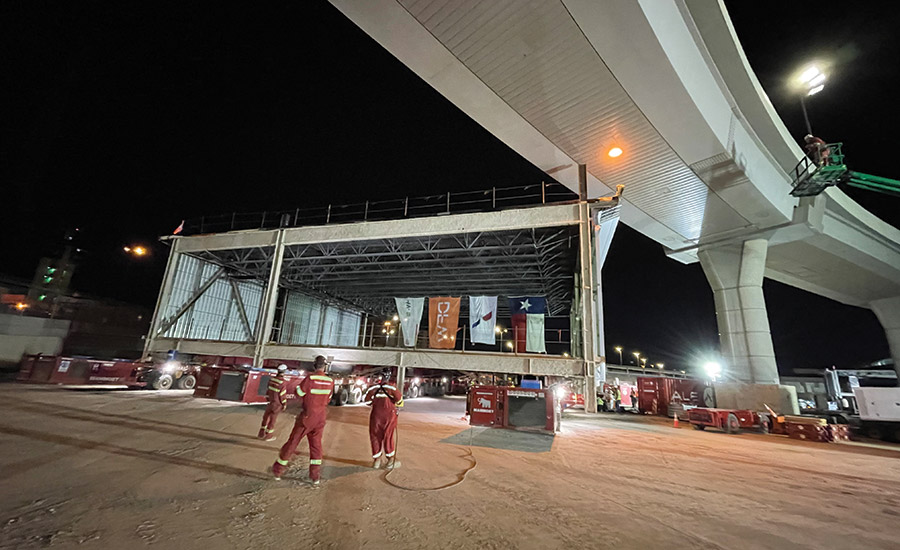 A module travels on SPMTs next to existing Skylink aerial guideway.
Photo courtesy of Julie Ludeman/DFW

The team responded to a request for qualifications that emphasized innovation, drawing upon three decades of experience with accelerated bridge construction, says Haag. Its proposal received approval in October last year, and design immediately began for the planned moves beginning Aug. 26.

“We dual-tracked the site and fabrication construction, including demolition,” says Christian. Gurjar adds that the team could spend up to 20 hours a week just on coordination calls.

The concourse is expected to open in summer of 2022. The modular method shaved at least 22% off the schedule, says Khaled Naja, DFW executive vice president, noting that other airport executives have shown interest. “This is a paradigm shift” in airport construction, he says.