When Samantha Montano rushed to Houston in April 2016 during some of the city’s worst floods, she saw untrained  volunteers  running  kitchens, handing  out  supplies and managing mountains of donated clothing—most of it unneeded. The volunteers, not the Red Cross or the federal government, shouldered the frontline workload.

By the end of the next year, a record series of U.S. hurricanes and wildfires had prompted the leader of the Federal Emergency Management Agency to describe his agency in testimony to Congress as “tapped out.”

As the U.S. learns to adapt to climate change, it will sustain more blows from worsening weather, disrupting hundreds of thousands of lives and hitting the poor especially hard. And Montano, whose work in emergency disaster management began as a volunteer in New Orleans, post Hurricane Katrina, is determined to try to do something about it. Her new memoir-monograph, “Disasterology: Dispatches From the Frontlines of the Climate Crisis,” (Park Row Books, 352 pages) is another phase in an unusual career. 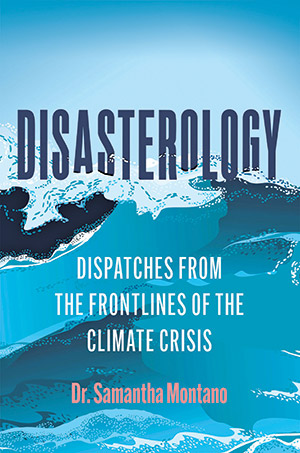 Montano, who now has a PhD in emergency management, is on the faculty of the Massachusetts Maritime Academy and has labeled herself on Twitter a “cool disasterologist.” Such media-conscious coinage will help gain attention for the deadly serious side of her subject—how to deal with the newly normalized pace of floods, fires and hurricanes.

While her book contains reports about places such as tornado-devastated Joplin, Mo., some of her best chapters concern a more gradually unfolding disaster: a beach town in Maine called Camp Ellis, which partly because of a long-ago project by the U.S. Army Corps of Engineers, is slowly being claimed via flooding by the warming Atlantic Ocean.

The author’s references to systematic disaster profiteering are familiar from Naomi Kline’s 2008 “Shock Doctrine” and later books on “disaster capitalism.” They argue that private companies and enablers in government use the shock of disasters to arrange money-making recovery work and permanently eject the poor to redevelop communities that are whiter and more profitable. The culpable parties, in Montano’s view, include the fossil fuel industry, greedy developers, co-opted politicians and the Corps of Engineers.

Is Montano preaching to the progressive choir? Maybe. But there is no doubt that sound emergency management will spare poorer people from further impoverishment and trauma.

Montano’s book jumps around a bit too much but interspersed with specific disasters is a reader-friendly history of federal disaster management. Not until the 1930s did the U.S. government see itself as a regular force in such catastrophes. Victims, under the hands-off federal approach, were to tap insurance and savings and rebuild their lost homes and businesses with the help of private philanthropy and local government. For the 1927 Mississippi River flood, only the Red Cross coordinated the response. No multistate plan existed. President Herbert Hoover’s role was to promote donations and local shelter for displaced survivors.

Since FEMA was tucked inside the U.S. Dept. of Homeland Security after 9/11, it works within a government bureaucracy whose raison d’etre is fighting terrorism, and it lacks direct access to the president’s ear. Also, recent administrations have been known to shift funds from FEMA to border security.

In Montano’s view, the federal response leaves victims, state and local governments and philanthropy very much on their own. “We may now have a glossy National Disaster Recovery Framework, but the bootstrap approach remains,” she writes, and “the marginalized bear the greatest cost.”

An inept pandemic response likely sealed Donald Trump’s second-term defeat. Joe Biden could also sustain a potentially damaging political blow if the country perceives mishandling of a major flood, hurricane or earthquake. With so many Americans at risk, doesn’t it make sense to return FEMA to a robustly funded, independent government agency?