This website requires certain cookies to work and uses other cookies to help you have the best experience. By visiting this website, certain cookies have already been set, which you may delete and block. By closing this message or continuing to use our site, you agree to the use of cookies. Visit our updated privacy and cookie policy to learn more.
Home » Implosion Enables Expanded Search for Victims of Champlain Towers Tragedy
Southeast Construction NewsConstruction methodsDesignBuildings
Controlled Demolition

Roughly 10 days and 21 hours after a portion of the Champlain Towers South condominium in Surfside, Fla., originally collapsed, officials describe a successful implosion that carried down the remaining 12-story structure at 10:30 p.m. on July 4. It made way for an expanded search-and-rescue effort that had been hampered by safety concerns while the unstable section was still standing.

“Last night’s demolition of the remaining portion of Champlain Towers South was executed exactly as planned,” Miami-Dade Mayor Daniella Levine Cava said during her daily update the next morning. “Only dust landed on the existing pile,” the mayor added, confirming the intent of implosion consultant Controlled Demolition Inc. (CDI) working with demolition contractor BG Group. As a consequence, Levine Cava said, “by 1 a.m., we were in full search-and-rescue operation mode.”

On the morning of July 5, the number of confirmed deaths had risen to 27, with 118 still missing. That number may rise more quickly now. The unstable remaining structure of the 40-year-old residential building had limited search and rescue to less than half of the existing rubble pile, Mark Loizeaux, president of CDI, told ENR.

“Bringing the building down in a controlled manner was critical to expanding our scope of search,” said Levine Cava. “Truly we could not continue without bringing this building down.”

Important to officials, engineers and others investigating the partial progressive collapse of Champlain Towers, the work that went into preparing CDI’s implosion provided more details about the structure’s condition prior to the tragedy of June 24.

From the outset, Loizeaux “wasn’t comfortable” any of his team of seven and himself accessing any other areas but the tower’s lobby level and garage—where they encountered six inches of standing water.

Working from a set of 1979 building plans posted online by the town of Surfside, Loizeaux quickly saw the existing structure did not align with the drawings. Champlain Towers had a reinforced concrete structure with flat-plate floor slabs and lightly braced shear walls. The relatively thin slabs, lightly reinforced near the top of the slab, were supported directly on columns.

While noting the plans were not verified as as-builts, Loizeaux reported the built dimensions, structural reinforcement and required concrete strength  seemed to vary—at least in certain locations. The variations were not necessarily consistent.

In one area, for example, the columns measured 24 in. in diameter, while the plans showed them to be 16 in. in diameter. On the other hand, Loizeaux reported, columns in one section of the building should have been constructed with 6,000-psi concrete, according to the plans. Instead, he estimated—without verifying via testing—the concrete’s actual strength was “not even close” and “much softer” than 6,000 psi.

CDI didn’t take any core samples, Loizeaux said. But when he asked two of his drillers, separately, to describe the strength of the concrete, both replied, “Really, really soft,” he says.

Loizeaux did not observe much corrosion in the reinforcing steel. “I didn’t see any poor construction methods," he adds. "I didn’t see anything like that.” 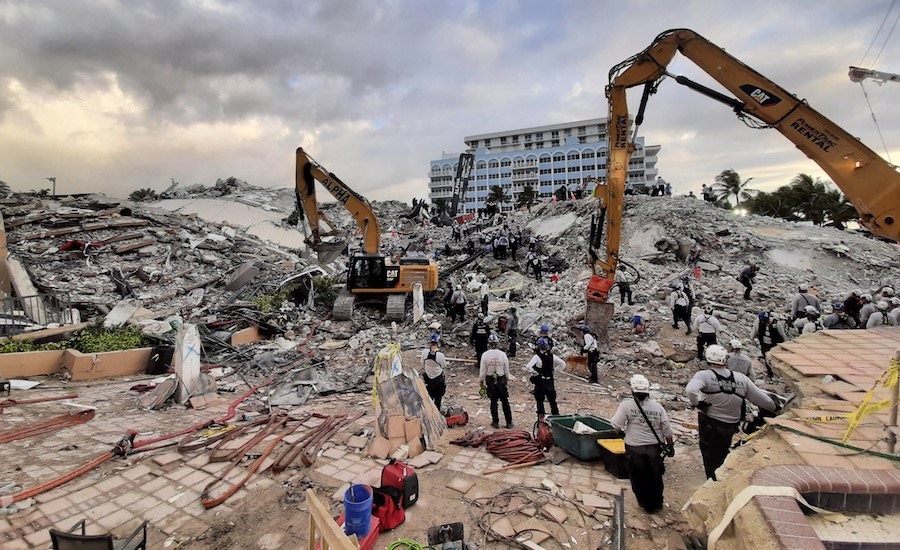 The remaining portion of the Champlain Towers South condominium in Surfside, Fla., was brought down by implosion on July 4.

There were two main goals for the implosion: Drop the building so that none of it falls on the immediately adjacent existing rubble pile; and completely avoid the high-traffic, utility-laden Collins Avenue, an estimated 20 ft from the tower’s north end, according to Loizeaux.

While CDI advised authorities to cover the “historic debris” pile with geotextile fabric, Loizeaux explained the plan was to “roll” the building in an opposing direction—but not too far. With a host of utilities underneath and along Collins Avenue, Florida DOT crews placed a layer of granular material across a section of the roadway to prevent damage. In the end, it wasn't needed, says Loizeaux.

The focus of the take-down plan was the structure’s second-floor transfer beam system, which he described as “very deep.” Comparing the transfer beams to a table with four legs, the explosives had the effect of first “tilting” that table to the south and west, thereby twisting it around and then picking up the northeast end of the table.

The explosives then dropped the transfer beam 10 ft into the basement, so columns designed to take vertical load were on an angle, and “the shear loads in those columns" just tore them apart, Loizeaux says.

Based on his observations of the concrete and other conditions of the structure, he "felt that if I tilted the table and dropped it, that the upper structure would come apart.”

At the end of the event, there was no debris on Collins Avenue and no utilities were interrupted, “And we didn't even have a broken window in the adjacent building,” Loizeaux says.