As investigators continue to seek the trigger for the Champlain Towers  South condominium collapse in Surfside, Fla., one of the deadliest accidental building collapses in U.S. history is already causing state elected officials, city and county buildings officials, industry groups and others to hurriedly reassess the condition of older buildings—leading to additional evacuations. And some are considering the need for stricter regulations and enhanced inspection standards.

Significantly, one building is likely to receive a clean bill of health. An investigation ongoing as of press time by KCE Structural Engineers of Champlain Towers North, a near twin of the collapsed structure, is preliminarily finding the building safe. “There’s nothing that we’ve seen so far in the north tower that would indicate any potential for a structural collapse,” said Allyn Kilsheimer, founder, president and CEO of KCE, in an interview with ENR. “Everything I know [so far] about the north building is positive.”


Search for a Trigger

So far, the Champlain Towers South site has given up much information to rescuers, engineers and other observers, but little remains known about the precise incident that triggered the catastrophe, and therefore the exact sequence of the failure. Kilsheimer has also been investigating the Champlain Towers South failure for the town of Surfside, and cooperating with the National Institute of Standards and Technology, to try to determine the trigger, but still has no idea of the cause. “The site is considered a crime scene,” he says. “We can’t do any materials testing yet.”

NIST, part of the U.S. Dept. of Commerce, is leading a technical investigation into the failure. “This is a fact-finding not a fault-finding technical investigation” that could take a couple years, said James Olthoff, NIST’s director. The goal is to determine the collapse’s cause and make recommendations for changes to codes and standards, he said.

The instability of the remaining 40-year-old residential tower had limited search and rescue to less than half of the existing rubble pile, Mark Loizeaux, president of CDI, told ENR.

“Bringing the building down in a controlled manner was critical to expanding our scope of search,” Miami-Dade Mayor Daniella Levine Cava announced July 5. At midnight on July 8, the search-and-rescue effort officially shifted to a recovery mission.

CDI’s work enabled observations from Loizeaux and his team—which were relayed to investigators—about the building’s structural condition. Working from a set of 1979 building plans posted online by the town of Surfside, Loizeaux says the existing structure did not always conform to the drawings. The firm only had access to the building’s one-level subgrade parking garage and the lobby level. While noting the plans were not verified as as-builts, Loizeaux reported the built dimensions, structural reinforcement and required concrete strength seemed to vary—at least in certain locations. The variations were not necessarily consistent.

In one area, for example, some column diameters as built did not conform to the diameters indicated on the plans. Columns in another section of the building should have been constructed with 6,000-psi concrete, but Loizeaux observed concrete that was “much softer.” CDI used 128 lbs of explosives in all, he says. 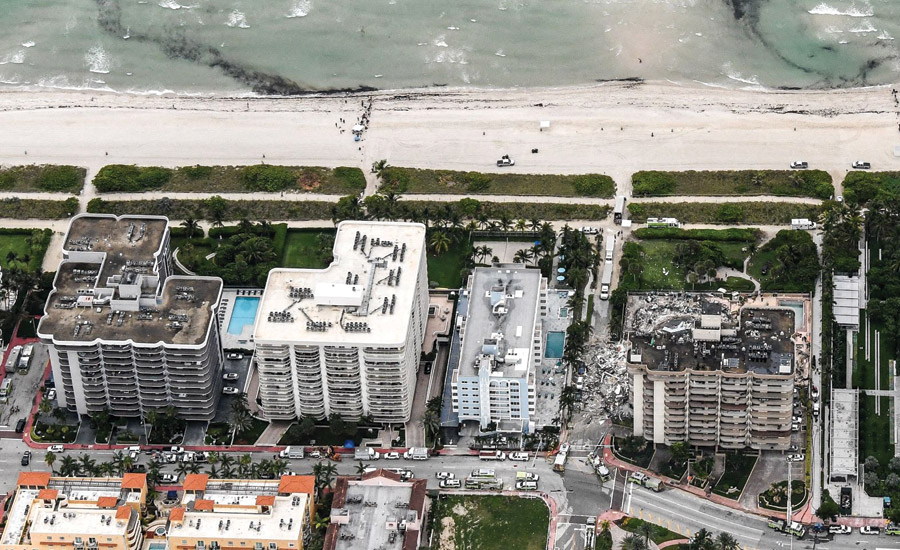 Champlain Towers North, a near-twin of the collapsed structure, has been initially reported safe after inspection.
Photo credit: Chandan Khanna/AFP Via Getty Images

Some Good News in Surfside

Fortunately for the residents of the occupied Champlain Towers North, the investigation by KCE has initially concluded the building is safe.  The 111-unit tower is the northernmost building of the original three-building Champlain Towers oceanfront development. Like the south tower, the north tower was completed in 1981, and was built by the defunct Nattel Construction, a Miami Beach contractor owned by the late project co-developer Nathan Reiber. Both were engineered by the defunct Breiterman Jurado & Associates. Both have a basement under the entire site, including and extending beyond the building’s footprint.

KCE performed scans to locate the reinforcing steel and completed 3D laser scans of the exterior, done at 12 noon on July 10 and at midnight on July 11. The basement garage was also scanned.

Additionally, the firm expects to take 20 to 30 samples of the concrete, mostly from the slabs but also from a couple of columns. Column cores are 1.5 in. in dia and slab samples are 4 5/8 in. in dia. Core holes are immediately filled with 8,000-psi concrete, says Kilsheimer.

The engineer is not taking any reinforcing steel samples and not drilling slab cores near columns.

Governments across the state are ramping up review and inspection of aging buildings and enacting some evacuations. In the case of Crestview Towers, a residential building in North Miami Beach, the building remains under evacuation order after conflicting inspection reports (see story p. 10).

Meanwhile, the cities of Boca Raton and Delray Beach are moving quickly to come up with stronger building re-inspection and recertification regulations targeting aging multistory residential buildings. Boca Raton Mayor Scott Singer told ENR that the city is preparing to introduce an ordinance at the next city council  meeting in late July to add “more stringent building recertification standards” than those in place in Broward or Miami-Dade.

“The current plans for the new law will have an initial recertification of no more than 30 years, periodic recertification after that, and more thorough requirements for submissions of reports and studies,” according to Singer.

“I’ve committed to fast-tracking these efforts, and Boca Raton is poised to lead the way among cities outside of those counties to increase safeguards,” Singer said, adding, “We continue to work with engineers and building professionals to improve our best practices in light of new information.”

In Delray Beach, city officials are addressing issues with the Linton Ridge condominium complex, where a second-floor concrete walkway was found to be pulling away from the vertical structure at various points. Though deemed safe as long as repairs were made promptly, city spokesperson Gina Carter says “new regulations for older buildings may be forthcoming.” 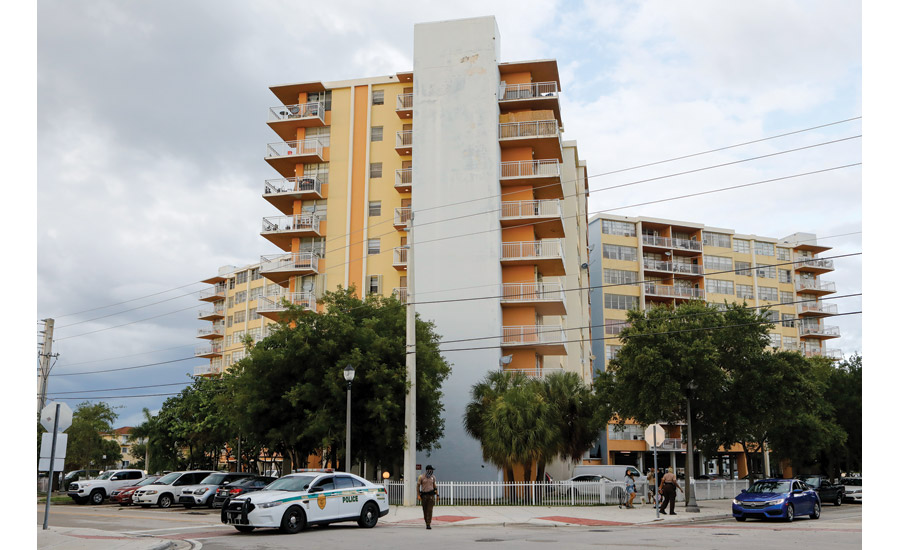 City officials in North Miami Beach, who ordered the occupants out on July 3, claim that the new structural engineering inspection report for the 10-story Crestview condo, built about 1970—reversing a prior report and declaring the building safe for use—fails to comply with the 40-year recertification program required by Miami-Dade County, Fla.

“More disturbingly,” wrote North Miami Beach Building Official J. Daniel Ozuno in a letter to the condo association, the new report failed to “reference or directly refute” the condo’s prior engineering inspections, which designated the building unsafe for occupancy.

Contacted by ENR, Fernando Azcue, the licensed engineer who carried out the new engineering inspection, says that he submitted all material to the condominium association required by a 40-year recertification. “I sent all the documents,” Azcue says.

The rejected report compounds the condominium association’s existing financial and legal problems. It is mediating a disputed insurance claim for millions of dollars of hurricane damage from 2018. And city officials released information showing the condominium owes hundreds of thousands of dollars more in fines for building violations.

More recently, North Miami Beach announced a police investigation of the condominium association related to assessments for repairs. Several condo owners have sued the association over repairs and funding.

Completed in January as part of Crestview Towers’ response to the required 40-year recertification process—but not submitted to town officials until July 1—the initial inspection report stamped by engineer Roberto Barreiro deemed the 10-story, concrete structure with a slab-on-grade foundation—and its electrical system—unsafe for occupancy. The new engineering report pronounced the 156-unit, three-winged structure safe for occupancy but in need of costly repairs. The report found many of the structure’s concrete components, the ground-floor tower columns, the second-floor slab and elevated slab at the pool deck to be in fair condition. But spalling was common in parts of the structure, and various components require concrete repair or restoration. The report advised that columns requiring repair will need to be shored to support all loads and new rebar will have to be spliced into place in some locations.

Engineers have said that meaningful review of the condition of a concrete building would include a review of the structure’s design and detailed information about the location and configuration of cracks. County rules don’t require review of a structure’s design, saying that by age 40, structures have been time-tested. But the condition of Crestview Towers showed that enough time passing without maintenance may require repairs that outstrip an owners association’s willingness or ability to pay.

Allen Douglas, executive director of the Florida Engineering Society/American Council of Engineering Companies of Florida said a working group of engineers formed after the collapse is meeting virtually each week. Douglas said the group is looking at aging structures and statewide recertification and plans to make recommendations in 60-90 days.

“The group’s focus is whether Florida should have mandatory building reinspections, who should carry out those inspections and how to not make the inspection cost prohibitive,” Douglas said.

Attorney William Sklar, who chairs a Safety Task Force created July 6 by the Florida Bar, says the group is working on a 90-day deadline to review all aspects of state law pertaining to condominium development and construction. The group is examining whether the 40-year building recertification process present in Miami-Dade and Broward counties should be statewide.

Said Sklar: “If we find there are any changes or additions needed, then we are recommending to the governor to act to minimize the chances and prevent another collapse.