Engineers are puzzling over what could have contributed to the shocking and deadly partial collapse of the 12-story Champlain Towers South residential condominium in Surfside, Fla., about 15 miles north of Miami Beach. Occurring in the early hours of June 24, the failure of the reinforced concrete structure with flat slab floors has caused an as-yet unknown total number of fatalities.

As first responders ramped up work at the site, Miami-Dade County Mayor Daniella Levine Cava confirmed nine deaths on June 27, with an estimated 156 people unaccounted for. She also said there will be a 30-day audit starting immediately of all buildings under county jurisdiction that are 40 years and older, or near the four-decade mark, adding that officials in cities within Miami-Dade would also order inspections of similarly aged buildings they are responsible for.

The progressive failure, which took seconds, was characterized as “highly unusual” and “unheard of” among U.S. buildings by structural engineers.

“This is a highly unusual [progressive] collapse, the first being the extent of it,” says Glenn Bell, a forensic structural engineer and director of Collaborative Reporting for Safer Structures (CROSS-US), a division of the American Society of Civil Engineers' Structural Engineering Institute. The building pancaked "very quickly," adds Bell.

Sudden progressive collapses are infrequent. As a forensic engineer, Bell says he’s only been involved in investigating a “handful” that “have gone down to this extent” during his 45-year career.

It is also curious and rare that the building had been standing for nearly 40 years and yet underwent such a sudden progressive collapse, says Bell, who adds that this needs to be studied. Catastrophic progressive collapses of this extent often result from “systemic issues with the design and/or construction” that are often revealed either during construction or shortly after the structure’s completion.

“A lot of the investigation in this case I'm sure is going to focus around" why the structure stood for 40 years and then suddenly collapsed, Bell says. Questions over changes in the beach-facing structure’s inherent strength or capacity since it was built are likely to be a focus of the investigations as well.

The existence of latent defects “that just were not brought out because it wasn't the right combination of problems” is another avenue of likely study, he says. Bell said a partial progressive collapse that occurred in 1968 at a London apartment building occurred when a gas explosion blew out load-bearing walls, bringing down a section, and highlighting a structural weakness.

The 136-unit Champlain Towers South was completed in 1981, built by Nattel Construction, a Miami Beach building contractor owned by project co-developer Nathan Reiber. He also constructed two nearby buildings over the next several years, the 111-unit Champlain Towers North and the 99-unit Champlain Towers East, according to an 2014 online obituary and The Real Deal. Nattel is listed as inactive, noted a state Division of Corporations listing.

Miami-Dade Mayor Cava said on a June 27 CBS News appearance that Surfside's building inspector "did not find anything to cause concern" in an inspection of Champlain Towers North. But city Mayor Charles Burkett told ABC News that “an army of engineers are going to get in there and pore over that building from top to bottom.”

At the time of the Champlain Towers South completion, U.S. building codes had not yet been changed to try to prevent progressive collapse. That was the same year that a “famous failure” of an under-construction condominium project in Cocoa Beach, Fla., occurred—an event that helped prompt code changes, Bell says.

“It's possible that there were some underlying latent defects that existed from the beginning,” he says. “It's often the combination of factors that brings [buildings] down.” 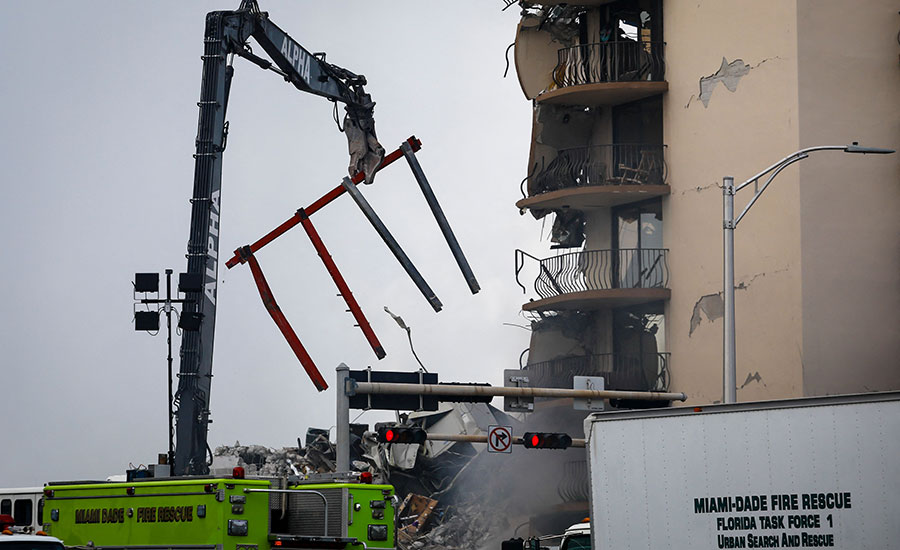 A crane removes wreckage of a partially collapsed building in Surfside north of Miami Beach, Florida on June 25, 2021. - Four people are now known to have died in the collapse of an oceanfront apartment building near Miami Beach, officials said Friday, while the number of unaccounted for has risen to 159 -- fueling fears of a much higher death toll.
Photo by EVA MARIE UZCATEGUI/AFP via Getty Image
*Click the image for greater detail

Other possible causes that will likely be investigated include the deterioration of building systems or changes in site conditions.

The condominium association that owns the building had reportedly just begun the county required 40-year building recertification process, according to the Miami Herald. That process mandates that a registered engineer or architect submit a report on the “general structural condition” of the building, and of its electrical systems.

The town of Surfside on June 25 released public records related to Champlain Towers, including the structural field survey report conducted in 2018 that sheds light on the building's likely condition at the time of the collapse. 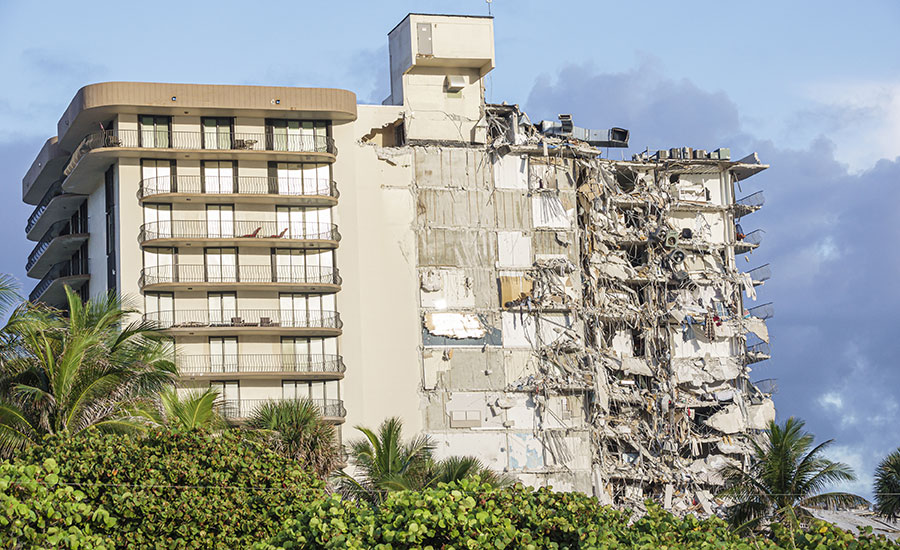 Damage caused by the partial collapse of the Champlain Towers condominium building in Surfside, Fla.
Photo by: Jeff Greenberg/Universal Images Group via Getty Images
*Click the image for greater detail

The report, prepared by structural engineer Frank P. Morabito, founder and president of Sparks, Md.-based Morabito Consultants Inc., noted that the structure's parking garage—positioned underneath the tower structure—showed "abundant cracking and spalling of varying degrees ... in the concrete columns, beams and walls." The report said "although some of the damage is minor, most of the concrete deterioration needs to be repaired in a timely fashion."

The consultant made no mention that the deterioration he witnessed could potentially lead to a collapse but he said "the failed waterproofing below the pool deck and entrance drive as well as ail of the planter waterproofing is beyond its useful life and must all be completely removed and replaced."

Morabito reiterated that "the failed waterproofing is causing major structural damage to the concrete structural slab below these areas."

He said: "Failure to replace the waterproofing in the near future will cause the extent of the concrete deterioration to expand exponentially."

In a late evening June 26 on line statement, the structural engineer confirmed it was retained by the Champlain Towers South Condominium Association to prepare the building's 40-year recertification, noting "four decades of experience providing professional design and inspection services" for "a wide range of structures," including high-rise residential and commercial properties.

Morabito noted on its website its involvement in devising ways to strengthen concrete in the 15-story Dolphin Towers in Sarasota, Fla., where extensive structural damage was found in 2010, forcing a 24-hour evacuation of 117 units and a five-year closure and repair.

The firm said its report provided to the association in October 2018 included "a $9.1-million estimate of the probable costs to make the extensive and necessary repairs." Morabito said "among other things, our report detailed significant cracks and breaks in the concrete, which required repairs to ensure the safety of the residents and the public."

The engineer said "the association engaged our firm again in June 2020 to prepare a 40-year 'Building Repair and Restoration' plan with detailed specifications for completing the necessary repairs and restoration work."

It noted that "at the time of the building collapse, roof repairs were underway, but concrete restoration had not yet begun."

"We are deeply troubled by this building collapse and are working closely with the investigating authorities to understand why the structure failed." 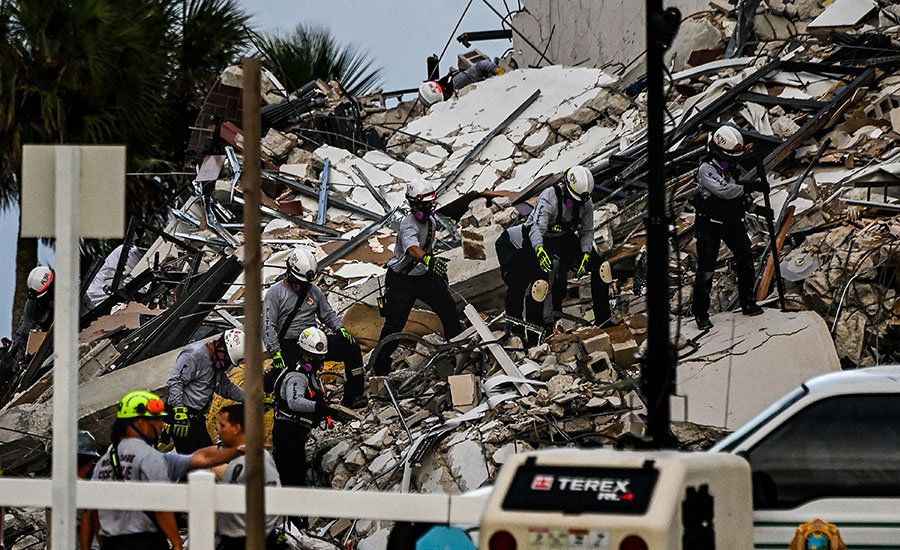 Search and Rescue personnel work at a partial collapse building in Surfside, Miami Beach, on June 24, 2021. - A high-rise oceanfront apartment block near Miami Beach partially collapsed early Thursday, killing at least one person and leaving 99 unaccounted for, with fears the toll may rise much higher as rescuers comb through the rubble.
Photo by CHANDAN KHANNA/AFP via Getty Images
*Click the image for greater detail

The Miami area’s climate poses a unique threat to buildings, according to John Pistorino, a principal at Pistorino & Alam Consulting Engineers Inc., South Miami, who as a consulting engineer for the county, was instrumental in developing the recertification program following the 1974 collapse of a federal building that was attributed to corroded reinforcing steel.

“We’re in a highly aggressive environment, where salty ocean air and rain can affect concrete that’s not properly protected,” says Pistorino, a 54-year engineering veteran. He likens salt to “a cancer,” especially if it gets into cantilevered balconies found on many high-rises, or in garages where columns interact with floor slabs and pile caps.

“The recertification program ensures owners invest in proper maintenance needed for these conditions,” he says, adding that while concrete restoration work needs to be designed and completed to American Concrete Institute standards, the discovery of more serious issues during inspections can warrant a building’s immediate evacuation.

While Pistorino hesitates to speculate on a cause for the Champlain Towers collapse, he, like Bell, considers the speed of the destruction “unique” and “unheard of” in the U.S., given that concrete failures are rarely so sudden.

“Concrete has a way of reproportioning its load, shifting and transferring it from one element to another, at least temporarily,” he says. “You’ll typically see evidence of that with cracks or other indications.” 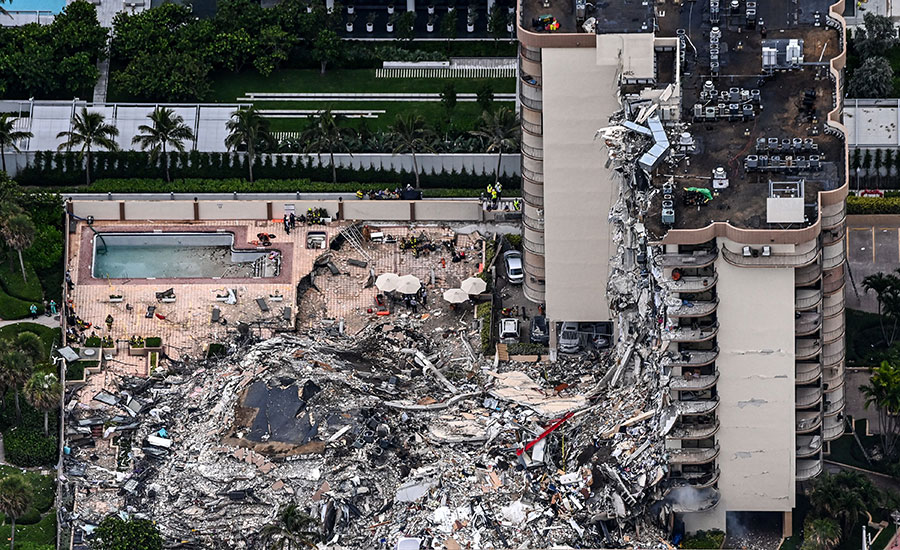 This aerial view taken while search and rescue personnel worked on the debris pile shows the basic footprint of the Champlain Towers South collapse site in Surfside, north of Miami Beach.
Photo by CHANDAN KHANNA/AFP via Getty Images.
*Click the image for greater detail

Pistorino declined to confirm to ENR local reports that he has been retained to investigate the collapse.

The geotechnical conditions may also be a contributing factor. A 2020 study conducted by Shimon Wdowinski, a professor at Florida International University's Institute of Environment had singled out the Champlain Towers site for notable land subsidence.

According to a release from FIU, the land and sea-level rise study “identified the 12-story Champlain Towers South condominium as the one place on the east side of the barrier island where land subsidence was detected from 1993 to 1999.” However, Wdowinski noted that factor alone “likely would not cause a building’s collapse.”