The U.K. is paving the way for a big boost in global development of floating offshore wind projects as part of a national drive to deliver 1 GW of electricity from the technology by 2030.

Crown Estates, the U.K. offshore licensing authority, recently announced it will start the leasing process for nearly 300 MW of floating wind farms in the Celtic Sea, off southern England.

Offshore wind, still mainly fixed-based, accounted for 27% of total U.K. renewable power generation in 2019, growing by 20% last year to 32,000 GWh, according to the Office of National Statistics. The cash value of marine renewable energy production grew by a factor of 37 from 2008 to 2018, it adds.

The Celtic Sea announcement was “an important step in providing the market the confidence it needs to plan and invest, bringing with it huge opportunities for jobs and the supply chain,” said Huub den Rooijen, director of the authority's energy, minerals and infrastructure portfolio 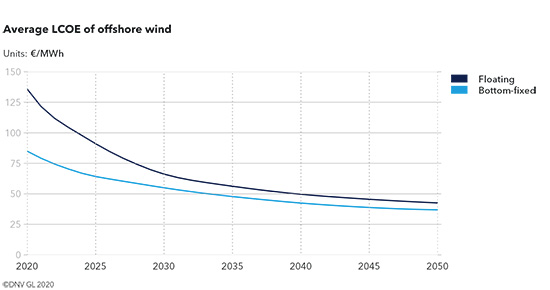 The authority last year awarded development rights to the Blue Gem Wind joint venture for the proposed 96-MW Erebus floating project in the Celtic Sea area. For that project, the joint venture plans to use a Windfloat—a three-legged floating base developed by Principle Power Inc. in Emeryville, Calif.

Rebecca Williams, head of policy and regulation and the trade body RenewableUK  added: “There is a huge appetite within the industry to deploy (floating) technology,” said…Floating wind is essential for the U.K. to reach its legally-binding net zero emissions target by 2050."
The U.K. developments will form part of global move towards commercialising the technology during the 2020s, according to DNV, the Norway-based assurance and risk management company.

Output from floating wind farms will grow from around 100 MW now to 250 GW by 2050, forecasts DNV. Then, they will account for “around 20% of the offshore wind market and 2% of global power generation”, it adds. The main driver for this growth will be a 70% reduction in the cost of floating wind developments.

As well as the U.K., France and Norway are among European leaders in floating offshore wind power, says DNV. France has launched four pilot projects using different base types able to support 8-10 MW turbines. The prospect of three French 250 MW auctions from 2021 to 2023 “should drive developments forward,” adds DNV’s recent report The Power to Commercialize.

Outside Europe, DNV identifies Japan, South Korea and the U.S. as potentially large floating offshore markets.
With deep coastal waters and high wind loads, Japan is “one of the most attractive countries for commercialising floating wind energy,” notes DNV.

According to Reuters, the Japanese government started an auction last year for a 21 MW Goto floating project in Nagasaki Prefecture.

In South Korea, five international developers have agreed with the city of Ulsan to develop 7 GW of floating capacity, notes DNV.

The U.S. has significant, but as yet untapped, floating wind resources, notably on the Pacific Coast and the Gulf of Maine, it adds.

The U.S. National Renewable Energy Lab estimates there is more than 800 GW of energy potential available for floating offshore wind technologies off the West Coast. Oregon legislators last month introduced a bill to set a 3 GW floating offshore wind development goal and require a strategic plan presented to the legislature next year.