Construction groups and congressional Democrats are praising President Joe Biden’s $2-trillion jobs proposal for its massive infrastructure spending. But contractor groups and Republicans are criticizing its recommended “pay-for”—an increase in the corporate tax rate. That opposition may make the proposal’s path through Congress narrow and rocky. Some construction organizations are recommending a user fee instead of a tax boost to raise funds for the infrastructure proposal—presumably to include increasing federal gasoline and diesel fuel taxes. But the Biden administration has put a fuels-tax hike off-limits.

Biden, introducing his jobs proposal in a March 31 speech at a carpenters’ union training center near Pittsburgh, called the package “a once-in-a-generation investment in America.” He said the spending in the proposal, which the administration calls the American Jobs Plan, would generally be spread over eight years.

As Biden had indicated for months, a major theme of the plan is addressing the effects of climate change, such as steps to spark more use of electric vehicles and funds to make infrastructure more resilient. According to a White House summary, the administration is grouping the spending components—and spending—in four categories.


Looking at the Spending

They include transportation, funded at $600 billion; and residential, to include drinking water, broadband and public housing, funded at $650 billion. The proposal also includes spending to raise wages and benefits for home-care workers, funded at $400 billion; and increased research and development investment, funded at $580 billion. Most sectors traditionally viewed as construction-related infrastructure are in the first two categories. ENR calculates plan funding for such infrastructure is about $1 trillion. 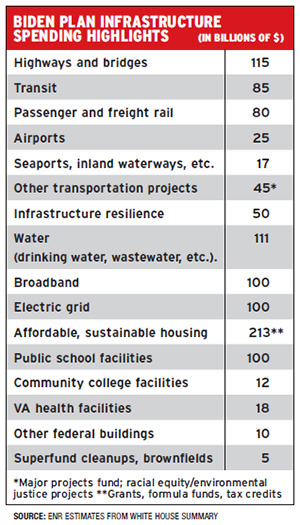 In his speech, Biden referred to the proposal’s $621-billion transportation section as “the heart of the plan” (see table, opposite page). The $115-billion highway allocation would pay for upgrading 20,000 miles of highways, roads and main streets, according to an administration document. It also would address “the ten most economically significant bridges in the country in need of reconstruction,” and “the worst” 10,000 smaller bridges.

A Federal Highway Administration spokesman said that in the 10-bridge program, states would compete for U.S. Transportation Dept. grants, spelling out “why their bridge is among the most significant because of its size, condition, traffic volume and importance to the regional or national economy.”

Biden also is seeking $174 billion in the transportation category to stimulate expansion of electric vehicles. An unspecified share of that money would go to build a network of charging stations around the country.

But Biden’s proposal to pay for the plan’s massive costs primarily by raising the corporate income tax rate to 28% from its current 21%, drew the fiercest criticism—from congressional Republicans, construction firms and other business groups. An administration official told reporters March 30 that the tax hike would “fully offset” the proposal’s cost over 15 years.

The 2017 Tax Cuts and Jobs Act, a top priority of the Trump administration and GOP lawmakers, had slashed the corporate rate to 21% from the previous 35%.The new plan also would raise the global minimum tax for U.S. corporations to 21%, a move the administration says would address current “incentives” for them to move earnings and jobs to other countries.

The plan’s unveiling drew a wave of reactions, for and against. Jamie Cook, lead construction sector investment analyst for Credit Suisse, said the proposal “would be a huge positive … for the machinery and engineering and construction sectors, driving long term secular tailwinds rather than just cyclical tailwinds.”

Terry O’Sullivan, general president of the Laborers’ International Union of North America, called the proposal, which has some key pro-union elements, “a historic investment that meets the scope of our needs.”

Stephen E. Sandherr, CEO of the Associated General Contractors of America, said that “the president is right to focus on rebuilding a broad range of aging and overburdened infrastructure and modernizing buildings.” But he added that Biden would also “saddle these investments with a host of labor and regulatory measures that will hurt workers and offset many of the economic benefits of these new infrastructure investments.” AGC also criticized the corporate tax rate increase.

Senate Republican Leader Mitch McConnell (Ky.) is leading the GOP opposition to Biden’s plan. “This proposal appears to use ‘infrastructure’ as a Trojan horse for the largest set of tax hikes in a generation,” McConnell said in a March 31 statement. “These sweeping tax hikes would kill jobs and hold down wages at the worst possible time, as Americans try to dig out from the pandemic.”

Some groups favor a user fee to finance the infrastructure program. Linda Bauer Darr, American Council of Engineering Cos. president and CEO, hailed the Biden plan’s “vision and scope.” But she also said its tax increase “could offset and undermine the economic recovery the President’s plan is trying to achieve.”

Darr was one of several industry leaders who proposed user fees as a revenue raiser and urged Congress and the Biden administration to “put this option back on the table for consideration.”

Some groups favor a user-fee ‘pay-for,’ but the white house ruled out that options, including a gas tax increase.

But White House Press Secretary Jen Psaki said in an April 1 briefing, “We don’t agree with that. We don’t believe the cost should be on the backs of the American people.”

Some organizations zeroed in on other elements of the Biden proposal. Associated Builders and Contractors President and CEO Michael Bellaman took issue with provisions to use project labor agreements on federally funded projects. He said the proposal’s preference for union labor would exclude the vast majority of construction workers.

Energy groups also weighed in on the plan, which has $100 billion to improve the electric grid. It also aims to boost non-fossil-fuel energy, by setting a target for having federal buildings operated 100% by clean energy, among other steps.

Frank Macchiarola, American Petroleum Institute senior vice president for policy, economic and regulatory affairs, praised incentives for hydrogen and carbon capture-utilization-and-storage technology development. But he said the Biden plan missed an opportunity “to take an across-the-board approach to addressing all our infrastructure needs–including on modern pipelines.”