With construction backlogs still strong and overextended fleets always aging, the industry’s triennial equipment trade show blows into town just as some construction professionals are looking to buy some heavy iron. Held in Las Vegas on March 10-14, this year’s CONEXPO-CON/AGG is also shaping up as the place equipment manufacturers show how they are pushing the limits of equipment design and addressing emerging technologies in construction.

With over 130,000 expected attendees taking in the offerings from over 2,000 exhibitors, it can be easy to get lost in the crowds and miss out on what’s really new. The show will feature a few record-setting machines, and several significant overhauls of popular equipment lines.

Pushing limits, Snorkel plans to launch its 2100S telescoping boom lift, which boasts a maximum platform height of 210 ft and a horizontal reach of 100 ft. With an unrestricted platform capacity of 660 lb, it has plenty of room to carry tools at height. The manufacturer claims the 2100S is the largest self-propelled boom lift ever made, and will be taking orders at the show for eventual delivery in 2021.

Over at the Liebherr lot, the German-based manufacturer will be showcasing the new LTM 1120 4.1 four-axle all-terrain crane. Weighing in at 135 tons, the machine edges into a size class normally only seen on five-axle machines. And with a lifting capacity of 22,490 lb and a maximum boom length of 217 ft, the crane is able to push into performance levels that normally call for a 200-ton crane.

For drilling work, Soilmec is launching its Blue Tech line of hydraulic drill rigs. The SR-75 is the first model in the line, which features more power and greater fuel economy than earlier Soilmec drills. It is able to deliver 207,255 ft-lb of rated torque on the rotary head and has a new heavy-duty main winch. The SR-75 also sports a redesigned, more efficient hydraulic system, which results in a savings of 2.75 gallons per hour of fuel.

For those looking to save a little money and go used, equipment auctioneers Ritchie Bros. plans to hold an auction at the show on March 11-13. The auctioneer will move over 2,300 items, including multiple Cat dozers and excavators, two Manitowoc crawler cranes, a Deere 944K wheel loader and a real grab bag of pipelayers, aggregate crushers, aerial work platforms, articulated dump trucks and day cab truck tractors. Everything is being sold without minimum bid or reserve prices, and Ritchie Bros. is offering a mobile app, allowing attendees to wander the show while bidding on their preferred machines.

Not everything worth seeing at the show will be a piece of equipment. CONEXPO has run talks from technology companies before, but this year the 3D printing firm Branch Technologies will get a chance to show off some of the work its been doing with free-form additive manufacturing in construction. 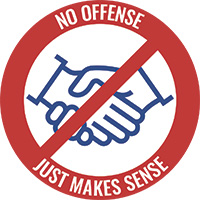 Concerns over the COVID-19 virus has show runners asking visitors to skip handshakes.

“Our talk’s going to be about construction-scale 3D printing, and how this [technology] can begin to interact on projects that these contractors in the audience are working on,” says Platt Boyd, founder and CEO of Chattanooga, Tenn.-based Branch Technologies. “We want to show them this stuff is results-based—this is what you can do on a project today.”

Branch Technologies’ 3D printing approach uses a robotic arm to print a resin skeleton in a preloaded pattern, which is then filled with foam and covered in glass fiber-reinforced concrete. The resulting panels have three times the strength of traditional wall systems and can be printed in any shape. Working directly off the 3D model, this 3D printing approach allows for sweeping shapes and curves that are normally much more expensive to custom fabricate.

Branch Technologies has done numerous demonstration projects, including a 3D-printed house, but Boyd says they are finding the most commercial success in wall systems. “This is the next generation of wall systems, and it’s market-ready,” he says. “What we’ll have at the show is the equivalent of what we are selling.”


The Search for the Best Operator

It won’t be a surprise to anyone walking the show floor that the best construction equipment isn’t of much use if it doesn’t have a competent operator. And Caterpillar is taking advantage of the teeming crowds at CONEXPO to run the finals of its Global Operator Challenge.

Qualifying rounds were held at Cat dealerships around the world in 2019, and on Mar. 10, nine of the best heavy equipment operators Cat could find will test their skills on a custom obstacle course. Operators will have to load and move material with a wheel loader, dig a trench with an excavator and play a round of miniature golf using a mini excavator.

With well over a hundred thousand visitors expected to swarm the Las Vegas Convention Center, many attendees and exhibitors are noticeably concerned about health risks and travel restrictions related to the COVID-19 virus now spreading around the world, disrupting air travel and international trade (see p. 11).

Several other trade shows in the U.S. have been canceled or delayed, and more than a few equipment manufacturers based in China, Japan, South Korea and Italy have announced they will not be sending employees to CONEXPO from the affected countries. Some of these companies, including those based in Wuhan, China, plan to staff their booths with employees based in the U.S. and Canada.

According to show organizers at the Association of Equipment Manufacturers, cancellations due to COVID-19 have affected less than 2% of exhibit space and 1% of registrations.

Many exhibitors and their equipment have already been onsite in Las Vegas for several weeks preparing for the show, so recent restrictions in international travel and shipping were not as disruptive to the show as they could have been.

Show organizers have sought to reassure attendees and exhibitors that the event will continue despite ongoing concerns over the spread of the disease.

“We understand the concern about COVID-19,” says Dana Wuesthoff, show director for CONEXPO. “We are encouraging attendees to take common-sense precautions and follow CDC guidelines to prevent the spread of illness.”

Wuesthoff adds that the show is coordinating with local and state health authorities, as well as airports and hotels, on proper safety procedures. CONEXPO organizers are setting up numerous hand sanitizer stations around the show and also promoting a “No Handshake” policy to alleviate some of the awkward interactions during a time of heightened concern about germs. Show runners are also considering refunds for those unable to attend from affected areas.

Strong Demand for New Machines at World of Concrete 2018