This website requires certain cookies to work and uses other cookies to help you have the best experience. By visiting this website, certain cookies have already been set, which you may delete and block. By closing this message or continuing to use our site, you agree to the use of cookies. Visit our updated privacy and cookie policy to learn more.
Home » NY Boosts Infrastructure Spend to $275B in New Budget Plan, Says Governor
New York Construction NewsEnvironmentTransportationFinanceGovernmentRisk

New York Gov. Andrew Cuomo (D) unveiled a fiscal 2021 state budget Jan. 22, touting $25 billion in new infrastructure investment that will raise—to a “nation-leading” $275 billion—the state’s total of current and future spending, with an “aggressive” $33-billion program over five years to combat climate change and boost construction resilience, he said. But the expanded program starting in the fiscal year that begins April 1 comes amid tumult in the state’s leading transportation infrastructure agency, the Metropolitan Transportation Authority (MTA), with the sudden departure of  New York City’s popular subways chief and friction with the governor.

The centerpiece of Cuomo’s climate change program is the $3-billion Restore Mother Nature Bond Act, which will fund a push to reduce flood risk in the state, invest in resilient infrastructure and in projects to restore fish and wildlife habitats, tidal and freshwater wetlands, and reclaimed natural floodplains. No specific projects were identified, but if New York lawmakers pass the funding proposal before the fiscal year starts, it will go onto state ballots in November.

John J. Cooney Jr., executive director of the Construction Industry Council of Westchester and Hudson Valley, said in a statement that the restoration plan “is unparalleled in the history of New York State.” In a blog post, Jeremy Cherson, legislative advocacy manager of Ossining, N.Y.-based environmental group Riverkeeper, said that the funding measure “will give New York’s wildlife … a fighting chance to recover and thrive.”

Other climate change-linked green investments include $28 billion for clean energy, particularly new investments in solar and wind farms, battery storage and transmission lines. These projects will support state goals to create 70% of its electricity from renewable resources by 2030 and achieve zero greenhouse gas emissions from the power sector by 2040, Cuomo said. 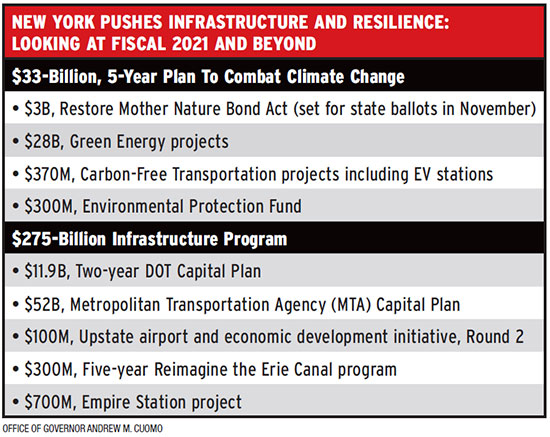 The added infrastructure boost, a core Cuomo priority, includes two programs that will begin in fiscal 2021. An $11.9-billion, two-year state Dept. of Transportation capital plan will fund highway, bridge, rail, aviation and some transit projects. In addition, the New York Power Authority will spend $300 million through 2025 to revitalize the Erie Canal across upstate New York and spur economic development along the Empire State Trail, a continuous 750-mile trail network that is expected to be completed later this year. Projects will include $65 million to prevent flooding and ice jams in Schenectady, near Albany.

Cuomo also cited continued funding for projects underway. The state will contribute $700 million to the $3-billion Empire Station in Manhattan, comprising the Moynihan Train Hall and a renovated Penn Station. Carlo A. Scissura, CEO of the New York Building Congress, tells ENR that the Penn Station redevelopment “would expand capacity by 40%.” That’s even as needed upgrades of the aging and damaged Hudson River tunnels remain caught in a political funding standoff with the Trump administration. Other ongoing program funding includes $100 million for upstate airports and the $52-billion MTA capital plan.

But as MTA proceeds with its big program, it may be tougher for it to hire consultants and contractors. Design firm fees on MTA projects have been cut by 10% to help tackle a potential fiscal 2022 $1-billion operating deficit. Also, new rules allow the agency to debar a contractor if a construction project runs more than 10% late or 10% over budget, no matter the cause. Jay Simpson, CEO of the American Council of Engineering Cos. of New York, last year told ENR that MTA should not cut costs by skimping on smart design work, but now says Cuomo’s continuing focus on infrastructure investment “is encouraging to see.”

Cuomo also has not given up on state legislation—which lawmakers failed to pass last year—to boost wages for construction workers, although details on the prevailing wage bill’s latest version are unclear. But the new budget includes provisions that would exempt more affordable housing projects than before from the wage rules, say local media reports.

Contractors in the Northeast Get Ahead of the Curve

Wesbuilt is ENR New York's Contractor of the Year for 2022