As the U.S. Environmental Protection Agency continues to sign off on new Water Infrastructure Finance and Innovation Act loans, one of its latest WIFIA approvals has a new twist. A $436-million loan to the Indiana Finance Authority, announced Oct. 9, is EPA’s first to a water infrastructure state revolving fund (SRF).

Indiana officials plan to combine the WIFIA loan with $474 million from SRFs to finance 23 projects, big and small, around the Hoosier State. By far the largest allotment is $547.5 million to the Indianapolis DigIndy tunnel system, a $2-billion multiyear program that includes 28 miles of deep-rock tunnels. Evansville will use $182.4 million for projects in its wastewater control plan. 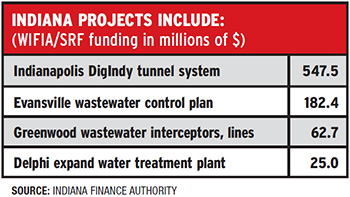 Ten small rural projects also will benefit from the WIFIA-SRF aid, including five that each will receive less than $1 million. The smallest allocation is $150,000 to Patoka, to repair a drinking-water distribution main.

EPA says that drawing on the WIFIA loan with its attractive rates and terms will save $20 million, compared with the cost of traditional bond financing.

Congress established WIFIA in 2014. But EPA didn’t clear its first program loan until April 2018, due in part to limited Congressional appropriations.

Since then, however, it has been active and creative. Besides the Indiana loan, EPA in August approved loans to two Oregon cities that will share in using the same project, a WIFIA first. Those loans total $640 million (enr.com 8/21).