In a “deep dive” assessment earlier this month, investment bank Credit Suisse analyzed metrics among large firms it tracks, with recommendations for needed change to eliminate or reduce high-risk profiles—some companies have addressed or are in process.

Cook notes the continuing “self-help” moves by some firms, through sell-offs of higher-risk businesses and transition into sectors with growth potential and more stable earnings.

She and other analysts point to moves by AECOM, Jacobs Engineering Group and KBR, for example, that have shed or reduced potentially higher-margin but risk-prone heavy construction markets, or are in process, in favor of more stable IT consulting or government services.

Cook and others caution that as KBR’s remaining energy business is set to ramp up with expected award of large liquefied-natural-gas projects, its backlog risk could accelerate, even requiring selling off that segment.

"We have been curious as to why KBR would take on the risk of lump sum LNG work, given its message about de-risking and prioritizing consistent performance," added UBS construction sector analyst Steven Fisher in a June 21 note:  "It appears that KBR's financial targets only reflect modest amounts of profit, relative to what the as-bid potential is, thereby potentially skewing the upside/downside to the upside, assuming there are no extreme outcomes." 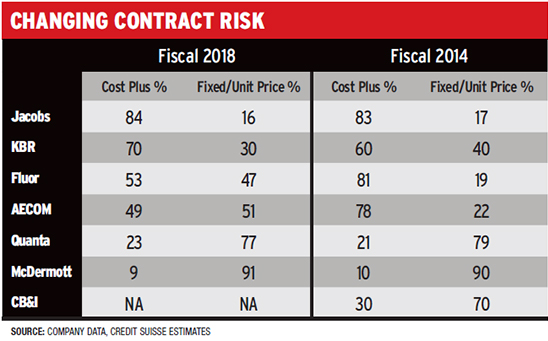 “For investors to buy in, [firms] need to demand better contract structures to de-risk business models. This is long overdue, given limited competition in the space and … reflecting unnecessary risk consistently placed on the contractors,”  says Cook.

Noting McDermott and Fluor Corp. recent quarter results that were battered by execution issues on projects, Credit Suisse cautions that firms need to review contract structures, with a push to “negotiate better terms and conditions.”

Says Cook: “This is particularly important as contractors have been increasingly taking on fixed-price work.” (See chart above).

Canada-based giant SNC-Lavalin Group Inc. also is moving to cut construction risk, in the wake of a surprise $350(C) million in project charges in its first quarter and has cut per-share value by as much as 60%, said Bloomberg,

“For investors to buy in, [firms] need to demand better contract structures to de-risk business models.”

In addition to previously announced halts to fixed-price EPC work and more global market departures, the firm's newly named interim CEO Ian Edwards has board of directors marching orders to simplify and de-risk its operations. The 52,000-person firm already has a $100-million cost-cutting under way.

Shares rose 7% on news that Edwards, formerly chief operating officer, was in the top spot. Predecessor Neil Bruce, who propelled the firm's revenue expansion organically and through key acquisitions since 2015, announced his retirement.

The firm also said it hired a top U.K and Hong Kong construction veteran, Nigel White, as executive vice-president of a newly created "project oversight" function to troubleshoot risk on big projects. A former top exec at Gammon Construction and UK giant Balfour Beatty, he starts on Aug. 1 based in London.

SNC-Lavalin also said it will merge its power-operations activity into its infrastructure unit, which one Toronto-baed analyst told the Globe and Mail publication "raises the odds" it will sell construction and resource businesses.

Another Canadian sector analyst, Yuri Lynk of Canaccord Genuity,, said in a June 11 investor note that this "could unlock the value we see in SNC-Lavalin's highly cash generative engineering services business, which is 75% of revenue."

The mega-project trend that has led to “mega-losses, and public firms, especially, cannot deal with that uncertainty,” says one construction financial consultant who declined to be identified. "Early on, design-build margins on big projects were tremendous. Over time, with competition, margins have gone way down and are not commensurate with risk."

“If you’re doing fixed-price jobs, sooner or later you will have a bad one, but there should be enough good ones to offset that,”  he says.

"I think what we are seeing is a reversal of a trend toward integrated design/build by the large engineering firms who did not want to be relegated to being subcontractors to the large builders," the consultant contends. "That movement has proven to be a disaster for some of the large E&C firms and they are moving back to selling services and not taking construction risk."

Cook notes that while backlog and award growth were "historically the primary drivers" of construction-sector investment. and despite promising prospects, they will become "less relevant"—with margins, returns and free cash flow more critical to company stock performance.