What Data Reveals About the Construction Technology Ecosystem

The global management consulting firm McKinsey & Co. has released a new study of 2,400 construction technology providers serving the entire life cycle of the industry. It analyzes the actual implementation of technologies by AEC firms across 38 “use cases”—such as design simulation, offsite fabrication and scheduling—as well as the investment transactions affecting the companies providing those technologies.

The study, “Seizing Opportunity in Today’s Construction Technology Ecosystem,” builds from an authoritative, data-driven basis to an analysis of technology trends flowing through the industry. It shows how the construction technology companies in the McKinsey database are landing their technologies within AEC firms.

Among the findings, it reveals what the study authors describe as “constellations of connected solutions” that are emerging around established use cases.

The constellations, shown as colored areas in the chart below, are described as indicators of where technologies are gaining the most traction and where their impact can be expected to rapidly increase in the near future. But the study also notes that few AEC companies are adopting technologies that integrate data between the constellations, as indicated by the weak bonding lines.

In the online version of the report the technology ecosystem chart is interactive.  Clicking on nodes reveals the volume of data points it represents. For example, the Labor and Professional Marketplaces node represents 132 examples.

The report notes that the first three constellations “are poised to be transformational for the industry,” while the fourth, supply chain optimization and marketplaces, “is notable for its quick rise as dozens of smaller players have entered into this market over the past year.”

Jose Luis Blanco, the lead among five study co-authors and a partner in McKinsey’s Philadelphia office, gives an example for interpreting the second chart (above):  The LL dot on the far lower right falls under the AI and machine learning use- case (blue). It is in the “emerging” quadrant, indicating the data for that use case represents younger technology companies in the index. Based on the size of the dot, the companies serving this use-case number fewer than 25. The position also shows medium to low transaction volume (i.e., investment activity). 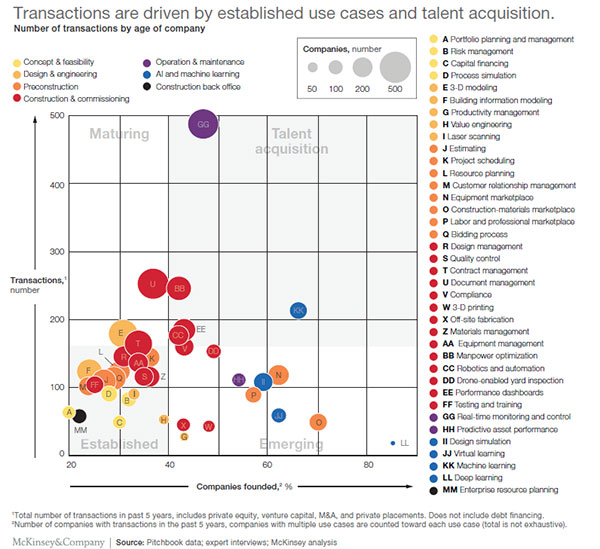 With each dot standing for a use case, the size provides an estimate of the number of tech companies that have AEC customers using their products to serve it. Position indicates company age and the private equity and venture capital investments, or transactions, it has attracted, plus a maturity evaluation.
Image Courtesy McKinsey & Co.

The study also finds the LL dot represents what is potentially the next set of emerging use-cases, meaning these are tools construction industry firms are starting to employ. “But in this case, while these are companies serving customers, they remain small without attracting a lot of investments, so far,” Blanco says.

However, the study also identifies machine learning and AI as examples of a few overarching technologies that are starting to bridge across multiple use-cases, such as those in the four main constellations. In the analysis, the authors predict technology companies serving this area may soon attract more investors because the technology has “boundless potential use-cases in engineering and construction.”

Although LL lies far to the right on the graph, it is not in the talent-grabbing zone yet. “We believe high transaction levels (the Y axis) are also important to indicate when something has entered the talent-acquisition zone; that high level leads us to believe that some of this acquisition activity is driven by a hunt for talent,” Blanco explains.

On the percentage scale at the bottom, LL lies at about 85%. This indicates that 85% of AI and machine learning companies have been founded in the last five years, Blanco says.

“In the immediate future, we expect AI’s proliferation in the E&C sector to be modest,” the report cautions. “Few leaders have the processes, resources, and existing data strategies in place to power the necessary algorithms and meaningfully implement this technology. However, the potential impact is so large that the industry can no longer afford to ignore it.”

The authors continue: “AI methods are increasingly able to work across industries, elevating the threat of competition from nontraditional market entrants.”

It notes that a handful of start-ups are already gaining market traction using AI-focused approaches.

The authors are bullish on all of the constellation technologies. For example, with 3D printing, modularization and robotics, they note: “Our research finds that consistent use of these techniques, on projects where they are economically feasible, could boost the sector’s productivity by five- to tenfold.”

They say such a system would include fully automated prefabrication processes to turn drawings or 3D models into prefabricated building components; construction robotics such as bricklaying or welding robots; self-driving heavy machinery; exoskeletons and wearable robotics; and metal 3D printing of long-lead components, such as joints, “enabling the production of high-performing components and, ultimately, more efficient, cost-effective parts.”

The report’s authors are similarly enthusiastic about reality-capture tools and the potential for maintaining a real-time digital twin of an ongoing project to adjust scheduling and budgeting in response to facts in the field. “What is truly exciting about these applications is the ability to reduce decision-making cycles in a construction project from a monthly basis to a daily basis through full automation of the project’s scheduling and budgeting updates,” the authors say.