After decades of reports about stagnant or slipping construction productivity, a new U.S. Bureau of Labor Statistics study, “Measuring Productivity Growth in Construction,” shows gains in several construction sectors. Many economists say the study uses more reliable productivity measures than those used before.

Exploring the single- and multi­family residential, highway, road, bridge and industrial construction sectors, the study applies updated “output price deflators” across the industry to measure the change in what contractors charge for items, ranging from the  number of bathrooms in single-family homes to the cost of maintenance and repairs for highways. Data developed through deflators allow for adjustments to the value of a project based on inflation. The study tailors the output price deflators to each construction sector, a technique not used in previous studies of construction productivity.

“By focusing on specific output indexes for subsectors of construction, BLS avoided relying just on the change in cost of the materials that go into producing that product and also avoided blending outputs that may have had very different price changes,” says Ken Simonson, chief economist at the Associated General Contractors of America. 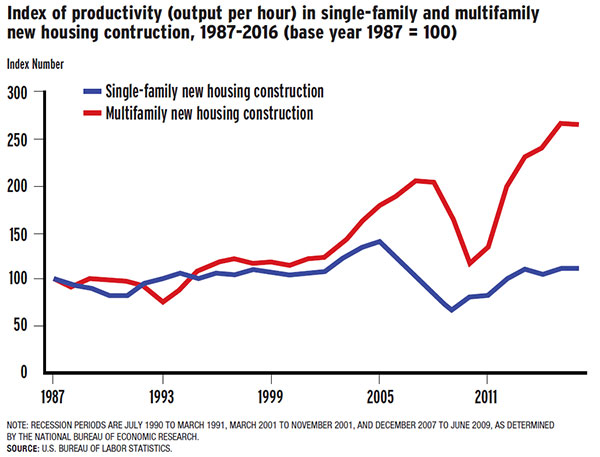 Leo Sveikauskas, research economist in BLS’s Office of Productivity and Technology and an author of the report, says that finding a proper deflator has been a problem for some time. It’s so difficult “to separate quality increases from price increases. Measures of the total prices and output of construction have been historically not as reliable,” he says, adding that the sectors used in this study have the most dependable deflators in the construction industry.

To conduct the study, BLS measured output and employment data from the U.S. Census Bureau’s Census of Construction. But since the COC data is released only every five years, the data for the interim years were taken from a different Census Bureau study, the “Value of Construction Put in Place,” which offers annual information on construction output.

To determine the appropriate deflators, BLS used data from four sources: the Census Bureau for single-family residential construction, the U.S. Bureau of Economic Anaylsis for multi­family construction and the Federal Highway Administration’s National Highway Construction Cost Index for highway data. For the industrial sector, BLS used its own recently released producer price index. The time periods studied for each sector were determined by the availability of each deflator.

The numbers change slightly when factoring in work completed by subcontractors, which, in 2012, accounted for 44.2% of total labor-hours in single-family construction, 74.5% in multifamily construction, 43.2% in highway  and 84.9% in industrial construction, according to BLS. Productivity in the single-family housing and industrial sectors rose slightly, to 1.2% and 5.5%, respectively. The other two sectors, however, experienced declines, with multifamily housing falling to 1.9% and the highway sector dipping into the negative, at –2.2%. 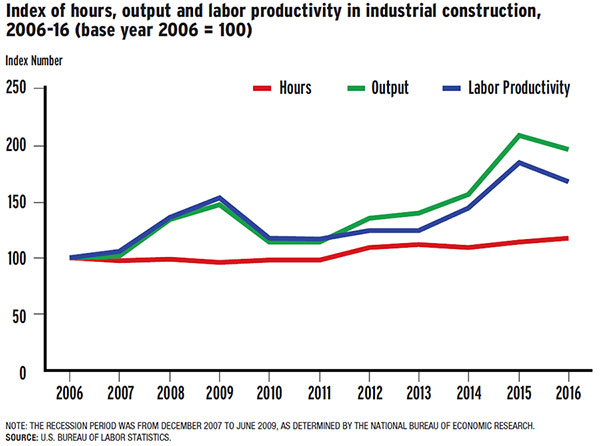 “This report should dispel the hoary myth that construction has little, no or even negative productivity gains.”

Simonson continues, “The pattern is more mixed for highway construction, but this probably reflects the frequent hiccups in highway funding that deter contractors from making productivity-enhancing investments in machinery and training.”

Wayne A. Crew—general secretary of the National Academy of Construction, based at the University of Texas at Austin—calls the report “exciting” and credits technology such as digital models as one of the catalysts for improvement. “The only curve we’ve seen [for decades] has shown stagnation and decline for the past 40 or 50 years,” he says of previous reports. “It is gratifying to see that the industry has been working on [the] right things to improve construction productivity.”

Crew adds, “With good measures to guide us, we now need to double our improvement efforts.” 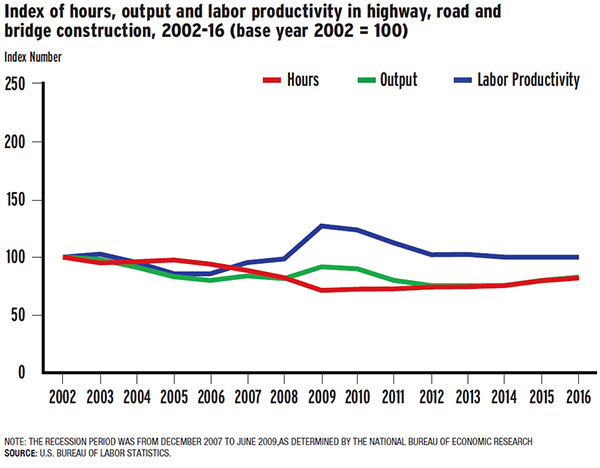 Jan Mischke, a partner at McKinsey & Co., praised the thorough reporting of the BLS study but remained cautious regarding the findings’ impact on the construction industry as a whole. In February 2017, Mischke released “Reinventing Construction: A Route to High Productivity,” with several recommendations to spur productivity within the industry.

“It is very important and helpful to continue improving transparency and data on the construction sector and expand measures to cover more and more of the overall sector,” says Mischke. However, the sectors considered accounted for only about 11% of the total hours in construction in 2012, and the rates of productivity gain it reports still are slow compared to other industries, he observes. “McKinsey’s research identified an opportunity to increase construction productivity by up to 40%, and as we discussed it with CEOs across the sector and value chain, it was clear that the industry leaders recognize this opportunity and have made productivity a priority,” he adds.

Paul Teicholz, professor emeritus at the Dept. of Civil and Environmental Engineering, Stanford University, and author of “U.S. Construction Labor Productivity Trends, 1970–1998,” expressed a skeptical view, as well. “In a study like this, the devil is in the details,” he explains. “It is so difficult to define the appropriate classes of labor that are measured every five years in the census of construction and then find an appropriate output price deflator for that type of construction work.”

While he calls the work “innovative,” Teicholz says it’s too early to conclude the study’s numbers are accurate.

“I hope that this analysis can be revisited and refined in the coming years,” he says.

Dodge Data & Analytics and The Blue Book Will Link Through Acquisition

Report: Pollutants Found in Groundwater Around 91% of US Coal Ash Sites