Commentary on The American Infrastructure

What we can learn from the Queensferry Crossing

This country’s infrastructure—bridges, airports, dams and levees—needs wide-scale repair and renewal. The United Kingdom’s new Queensferry Crossing bridge, connecting Edinburgh to Fife in Scotland, sets a new standard for how to do it. The result speaks for itself: The Queensferry Crossing, a three-tower, 1.7-mile-long cable-stayed bridge, debuted in early September well within budget and a manageable eight-month time delay—a rare occurrence among bridges. According to research at the University of Oxford’s Saïd Business School, nine out of 10 fixed links (bridges and tunnels) suffer an average cost overrun of 34% and a time delay of roughly two years.

Contrast the Queensferry bridge’s performance with that of the Bay Bridge’s east span, which connects San Francisco and Oakland, Calif. The U.S. bridge—a 2.2-mile-long, self-anchored, single-tower suspension bridge—blew its budget, costing $6.5 billion, and took roughly 24 years to plan, finance, design and build, nearly a decade past its initial projected completion date. Conversely, the Queensferry, comparable in scope to the Bay Bridge, took roughly 11 years to plan and build at almost a quarter of the price. The pain has not gone away since the opening of the Bay Bridge: costly litigation and quality disputes continue. Meanwhile, San Francisco commuters pay the price at the toll plaza every day.

Unusual for megaprojects, Queensferry’s cost estimate was revised downward several times, all the way to £1.35 billion in 2017 from £4.22 billion in 2007.

The Queensferry Crossing is a testament to how building an inclusive coalition of stakeholders early in a megaproject’s life delivers lasting value.

How did the Queensferry bridge team succeed?

First, the Queensferry planners diagnosed the problem early, before a catastrophic event. Rigorous routine inspections of U.K. bridges triggered an early alert to either refurbish or replace the old bridge at the Firth of Forth in Scotland. In contrast, discussions to deal with the Bay Bridge did not begin until after the catastrophic failure during the 1989 earthquake.

Second, the U.K. planners invested time and resources in an up-front design process. For example, a Jacobs-Arup joint venture worked to simplify the design, reducing the bridge width by showing that the existing Firth of Forth bridge could be converted to support a light-rail system in the future, if required. 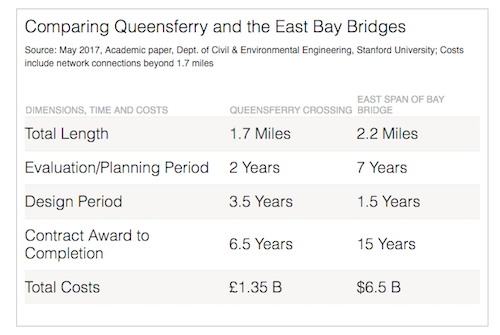 Third, the Queensferry Crossing is a testament to how building an inclusive coalition of stakeholders early in a megaproject’s life delivers lasting value. The U.K. planners used an integrated project delivery framework, a measured approach to coalescing key participants from the government, civil society  and the market at the front end and working with all constituents throughout the project. The Forth Estuary Transport Authority in the U.K., the Scottish government agency in charge of the aging infrastructure—engaged the public early and candidly about a variety of solutions.

Individual stakeholders were disincentivized to vie for influence or, worse, a zero-sum win in claims or arbitration. As a result, the Queensferry Crossing offered a level of price certainty and value for money that is hard to achieve. The Bay Bridge, in contrast, had an unhappy start from which it never recovered. On that project, a range of public agencies with unaligned interests and competing visions clashed over the right solution: the mayor and local politicians; Caltrans and state agencies; the U.S. Dept. of Transportation and the U.S. Navy.

To avoid these errors in the future, some change is needed.

Infrastructure decisions must be made proactively, instead of waiting for catastrophic events to trigger action. Project teams must resist the urge to fast-track a project and, instead, invest resources in careful design. Finally, building on the great American democratic tradition, the decision-makers must establish a sensible stakeholder coalition early in a renewal project’s life.

U.S. leaders should look across the pond for inspiration.

Cameron J. Bell is a researcher at the American University in Cairo. He holds a master of science in civil and environmental engineering from Stanford University and a master of public policy from the University of Oxford, Balliol College. He can be reached at cambell@aucegypt.edu.

If you have an idea for a column, please contact Viewpoint Editor Richard Korman at kormanr@enr.com.