As the string of storms that have battered California since the last week of December seem to be coming to an end, officials are beginning to tally the damage to the state’s infrastructure and assess the effects of the record deluge. Although the series of storms caused widespread flooding and 20 deaths, the lasting impacts may be a slight reprieve during a multiyear drought, and increased funding to repair aging water infrastructure. State officials are already eyeing funds for critical upgrades.

Jeremy Arrich, principal engineer of flood control for California’s Dept. of Water Resources (DWR), said on a Jan. 16 press call that infrastructure damage is still being assessed. Some levees across the state have been damaged, though it’s too early to say to what degree: “Incidents of levees sloughing, seeping, sinkholes, minor erosion—these are the things that have occurred across the state.”

Over the last two weeks, the state has sent flood specialists, engineers and technical experts to more than 50 locations in 17 counties to document and address levee issues and bank erosion. Hundreds of mudslides and landslides have also occurred across the state, many affecting transportation infrastructure. In addition to damaging levees, high floodwaters have also overwhelmed some municipal wastewater treatment plants and caused sewage to be discharged directly into San Francisco Bay, some roadways and the Pacific Ocean, according to news reports.

A total of nine “atmospheric river” events surged across the state over the past three weeks, said Michael Anderson, California’s state climatologist. Once the flooding recedes, the focus will shift to repairs. “The maintaining agencies will get to inspect and patrol their levees to look for any damage that may have occurred, as these waters have been up against the levees for so long, and then evaluating long-term repairs that may be necessary,” Arrich said.

President Joe Biden issued an emergency declaration for the state Jan. 9, and a major disaster declaration Jan. 14. These measures allow federal officials to assist with the disaster relief efforts as well as make federal funding available to those affected by the storms. The president toured some of the storm-impacted areas on Jan. 9.

According to Joseph Sweiss, press secretary for the San Francisco Public Utilities Commission (SFPUC), since San Francisco is the only jurisdiction in the state with a combined sewer overflow system, stormwater normally travels through CSOs and is treated at municipal wastewater treatment plants. But this group of storms, the worst in nearly 200 years, went far beyond normal—they overwhelmed the stormwater infrastructure.

“When we get such large amounts of rainfall that generate more … than the pipes were designed to convey, the force of all of this water flowing downhill creates pressure that can force the water out of the pipes through openings like manholes; that water then flows back into the system and is treated when capacity becomes available,” Sweiss said.

Eileen White, executive officer of the San Francisco Bay Regional Water Quality Board, told ENR that there’s not much that can be done to clean up temporary pollution caused by a surplus of stormwater. Most of the pollution does end up in the Bay or in the Pacific, and the system is designed that way. “I hate to say it, but dilution is the solution,” she says.

There is a protocol, however. Agencies that make unauthorized discharges into the Bay through wet weather events like the current series of storms are required to post signs notifying the public that the water is not safe, and keep them up until monitoring shows that bacteria levels have gone down sufficiently.

A number of stormwater improvement projects for the region are already in the works. SFPUC is in the midst of a ten-year capital improvement program that includes $632 million for managing and upgrading the city’s stormwater system, focused particularly on low-lying areas, Sweiss adds. 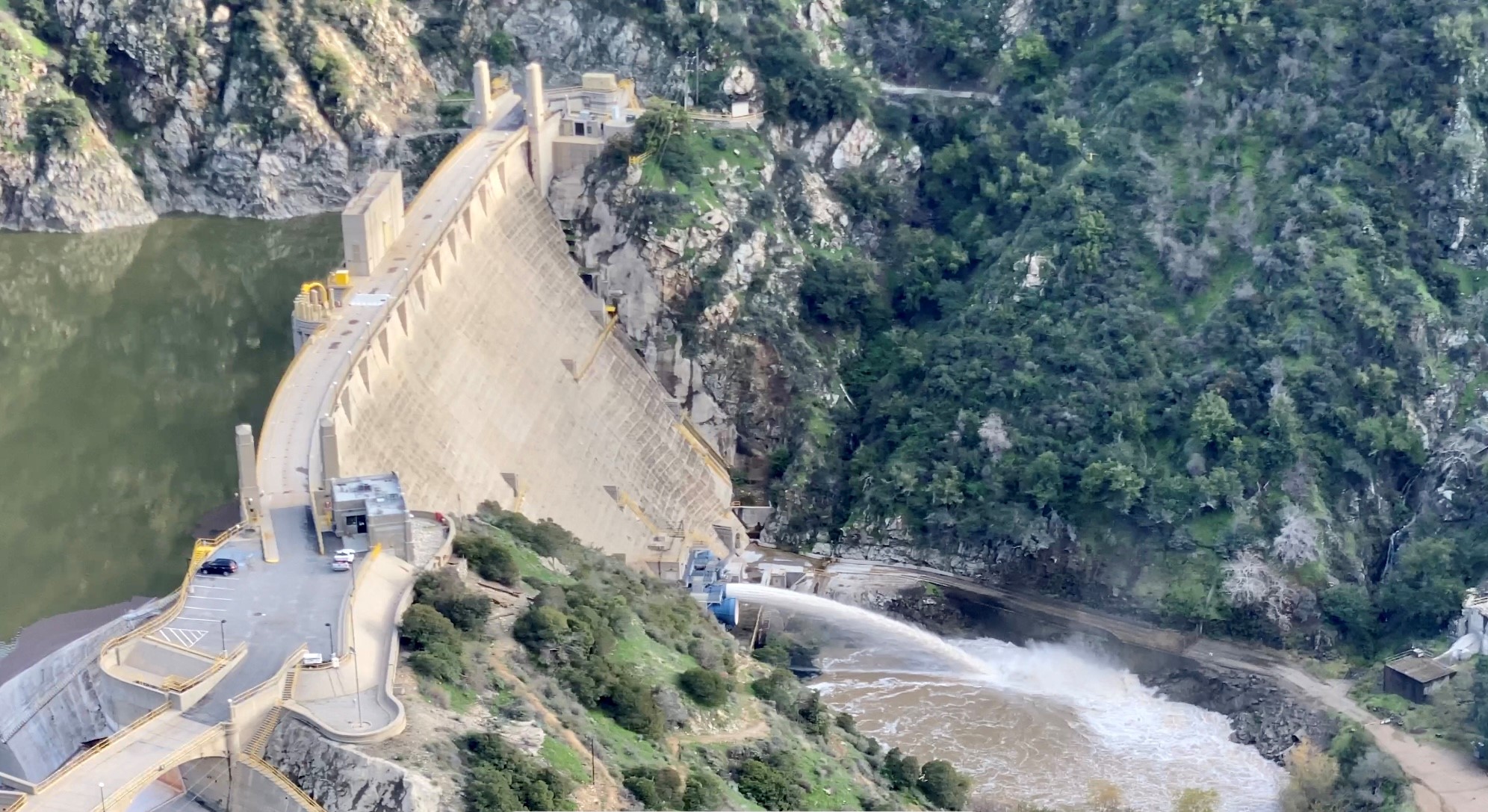 One of Los Angeles County's 14 dams releases water from recent storms, which will be captured in spreading grounds downstream for groundwater recharge.
Photo by Scott Blair for ENR

The storms’ silver lining has been the restoration of the state’s drought-starved reservoirs. Officials with DWR report total statewide water storage has risen to 91% of the historical average. Since Dec. 1, 2022, Lake Oroville—the state’s largest reservoir—has risen more than 100 ft, with storage levels at more than 2 million acre-ft—approximately 57% of its total storage capacity.

Anderson said that in addition to higher reservoirs, “snow pack is at epic levels,” which will also help mitigate California’s multiyear drought. Snow pack levels are ahead of the record peaks of 1982 and 1983, he said. “Because of healthy snow pack and sustained wet weather for three weeks, we’ve seen a pivot from drought response and trying to recover storage into doing some flood releases,” he said.

However, some of the reservoirs in the northern part of the state, notably Lake Shasta and Trinity Lake, “still have a long way to go” before they reach average operating conditions, he noted.

Through the county’s stormwater network of 14 dams, 27 spreading grounds and hundreds of miles of rivers, flood control channels and storm drains, the department protects the L.A. basin from flooding while recharging the groundwater aquifers that supply nearly a third of the region’s drinking water.

“We’ve started to see larger storms like we’ve seen recently where you get it all at once, and you have to really focus on flood protection,” says Keith Lilley, the county’s public works’ deputy director. “During this past storm, we did a very good job, with no loss of life or property.”

The system worked as designed, but “we’re increasingly seeing challenges to our mission with climate change impacting more fires,” Lilley adds. This leads to a fire-flood sequence that increases the amount of debris coming into flood control systems from burned areas, he says.

“In these last storm systems, we probably had close to a million cubic yards of sediment and debris come and wash down into our reservoirs,” says Sterling Klippel, principal engineer with L.A. County Public Works. “And that’s okay, because that’s what they’re designed to do: capture that sediment, and then allow the water to continue downstream” where it can recharge the groundwater via spreading grounds, Klippel adds.

Two county reservoirs, San Gabriel and Cogswell, went from having no water in October to being nearly full during the recent storms, according to Klippel.

water per year, part of an ongoing $400-million effort to boost water capacity as part of the Safe Clean Water Program approved by voters in 2018.

Anne Lynch, GHD’s integrated water management service line lead for the Americas, notes that there’s been a real focus over the past 10 years in California on implementing projects that achieve more than one goal, such as stormwater capture projects that also provide groundwater recharge. “There’s a lot of nexus between drought and flood management,” Lynch told ENR.

Moreover, there’s been a shift by some to evaluate not only the projects that need to be built to address flooding, climate change, and other issues, but also the timing and sequencing of projects to achieve the most benefit, she said.