Major infusions of federal spending such as the $1.2-trillion Infrastructure Investment and Jobs Act are poised to help keep the U.S. construction industry growing even as the pace of building in some sectors slows, says Stephen Sandherr, CEO of the Associated General Contractors of America. But the law’s impacts have been limited so far, he adds, while discussing AGC’s 2023 outlook, released Jan. 4.

The forecast, based on survey results from more than 1,000 AGC members, indicates contractors are expecting declines in the value of projects they bid on in retail, office and lodging markets, and nearly no growth in multifamily residential construction this year. Meanwhile, contractors “have remained relatively bullish” on most categories, including market sectors driven more by public funding, such as bridges and highways, transportation and water and sewer construction, Sandherr says.

“Many contractors hope to finally see the benefits of a flurry of new federal investments in infrastructure and construction,” Sandherr said during a call with reporters. “This includes funding from the bipartisan infrastructure law, the CHIPS Act and the so-called Inflation Reduction Act. In addition, many state and local governments have boosted their construction budgets, as they have benefited from the strong economy and a COVID-related influx of federal funds.”

So far, just 5% of AGC survey respondents said they have worked on projects funded by the Infrastructure Investment and Jobs Act. Another 5% said they have bid on IIJA-funded projects but have not yet won awards and 6% said they won bids for work not yet started.

More than a fifth of respondents said they plan to bid on projects but have not seen anything suitable yet. More than a third said they do not expect any change in their businesses as a result of the law. To maximize the funding’s impact, Sandherr says it is essential for the Biden administration “to resolve significant uncertainties” around Buy America provisions in the laws that he says lack uniform interpretation between agencies distributing project funds.

Overall, surveyed contractors anticipate growth in 14 of 17 market sectors measured by AGC. The industry has been “a bright spot” for the economy through recent difficult times, says Mac Caddell, president and chief operating officer of Montgomery, Ala.-based Caddell Construction.

“Construction in the past year or two has grown and is thriving in spite of the economic woes we’ve experienced,” Caddell adds. “Our industry is vibrant and it’s an essential part of the nation’s wellbeing.”

While the survey showed optimism, net growth expectations were still down from the start of 2022 in many categories. Some of that declining confidence may be due to the concerns respondents raised, including fear of an economic slowdown, high materials costs, an insufficient supply of workers or subcontractors, as well as rising interest rates and other costs.

Cement shortages are expected to continue into 2023, agree Casey Schwager of Greenville, S.C.-based King Asphalt and Michael Cwienkala of Chicago-based K.R. Miller Contractors. Some electrical components and certain types of steel have also been in short supply.

“We're telling our clients pretty much that if you can't get it at your local Home Goods store off the shelf, it's going to take some time to get,” Cwienkala says. 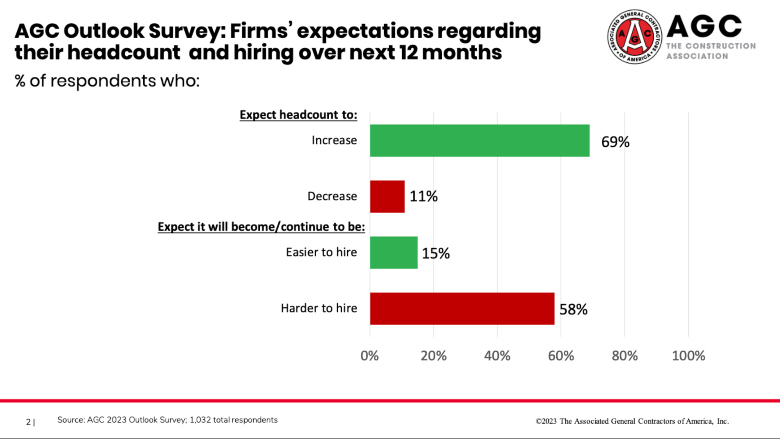 Most firms expect to continue hiring despite difficulties.
Chart courtesy of AGC

Nearly 70% of the firms surveyed said they expect to increase headcounts this year. Yet 80% reported having a difficult time filling positions. Most expect that will continue.

About a third of respondents provided incentives or bonuses and more than a quarter increased their portion of benefit contributions, Simonson says. Only 7% of firms made no increases in pay, incentives or benefits. Companies in the South were more likely to have made larger pay increases to attract and retain workers than firms in other regions.