The LEED for Homes Gold permanent supportive housing facility opened in February 2022 as Albuquerque’s first “single site” community for those with documented chronic homelessness and a mental disorder or alcohol/drug dependency. In 2020, the National Alliance to End Homelessness’ Point-in-Time Count estimated that more than 3,000 people were homeless in New Mexico every night.

A $7.13-million collaboration between two New Mexico-based nonprofits, the 38,000-sq-ft three-story downtown building is a “single site” because it provides homes as well as services to those in need. The first floor includes common spaces, with large storefront windows maximizing natural light, and behavioral health and case management offices. The second and third floors contain 42 one-bedroom apartments for formerly homeless people who now make the community their “forever home.”

The apartments embrace Trauma Informed Design. A cased opening in lieu of a bedroom door coupled with a small opening in the wall between the bedroom and the living room provides a visual connection where residents and management can see every space in the apartment from the safety of the front door. 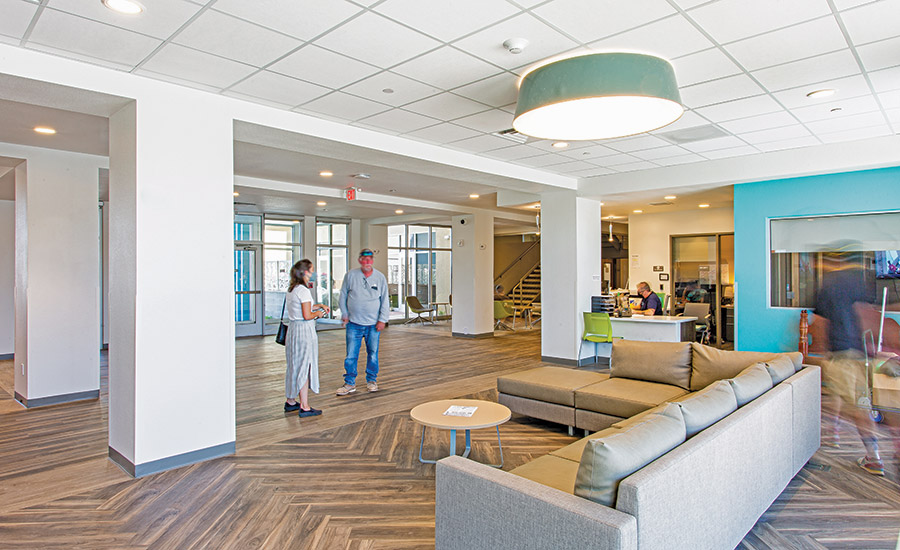 A collegial connection between the city and the community during design was not required by city development guidelines, but recommendations from the neighbors led to compromises in the building streetscape. These conversations resulted in the city’s first “Good Neighbor Agreement,” which has since been used in talks with other neighborhood associations to demonstrate the city’s commitment to upholding the safety, community character and quality of life for proposed projects. As a result, the facility has become a model for how homelessness can be successfully addressed in the city and nationwide.

Proximity to a series of overhead high-transmission power lines required the team to develop a strategy during the design phase to raise the lines; an OSHA-compliant plan allowed the team to complete the first- and second-floor framing, then a 100-foot pole was installed after an interface with the public utility. This resulted in a two-month completion delay, but the project stayed in budget and no injuries were sustained as a result of the change. 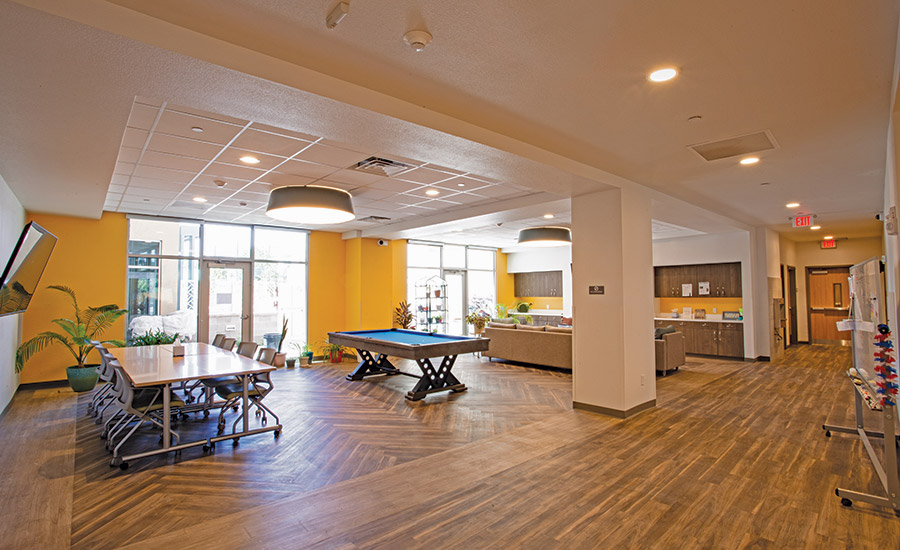 A “single site” has features not usually found in multi-family projects, so close communication furthered success. For example, a demonstration kitchen, where staff and residents can discuss healthy food options and easy ways of preparation, requires additional fire protection. In addition, a designated “safe courtyard” gives residents, still transitioning from living outside to having their own apartment, a safe outdoor space until they return inside the venue. The contractor also custom designed a laser-cut metal screen to provide a decorative yet secure boundary. Materials were selected to be familiar but also durable and easily maintained. To meet the unique aspects of the community, the architectural language remained simple.