$35M Effort to Keep Southern University Campus from Sliding Away

Southern University in Baton Rouge — a historically Black university in Louisiana — is undergoing multiple construction projects totaling $35 million to fix and prevent further structural damage to the university’s campus due to erosion caused by the Mississippi River.

Located at the outer area of a bend on the Mississippi River, where erosion is greatest due to stronger currents, parts of Southern University’s campus have become “a safety hazard that is dangerous to the population,” Maurice Pitts, the director of facilities at Southern University said in an interview on campus last year.

“Is the problem real? Yes. Has it affected campus life? Yes. Is it a safety issue? Yes,” Pitts said.

Since last year, the university has completed multiple emergency construction projects that addressed the most urgent erosion damage, including strengthening the ground near a student health building that officials said they were “in danger of losing.”

“This is a move that will protect and shore up this historically Black university for the next generation,” Louisiana congressman Troy Carter said in the announcement.

The grant will partially fund an erosion protection project that “will do more than put a Band-Aid on this problem,” Carter said. “It will be a long-term solution to protect Southern University — and this beautiful community space — from tumbling down the bluff.”

Although total costs for the projects currently add up to about $35 million, the Louisiana Dept. of Transportation and Development (LaDOTD) is still working on securing all the necessary funding.

“The project right now is in preliminary plans, and we’re submitting all of the documentation for that USDA funding,” says Corey Landry, a critical projects manager for LaDOTD.

The state agency is tasked with mitigating land loss along Southern University’s riverfront while receiving input on project designs from the Corps of Engineers.

“I don’t know how you would say it from the administrative side, but it’s been determined that we should be able to have the entire project fully funded,” Landry says.

The department completed construction on the terrain near the student health building and apartments, which were deemed unsafe due to erosion damage. The rest of the planned construction still has to be approved by the National Resources Conservation Service and United States Dept. of Agriculture, which puts the project on a timeline for pre-construction to start in 2024 and finish within two years.

In Danger of Losing a Building

Last year, a Southern University official said that the school’s Baranco-Hill Student Health Center would fall into the Mississippi River if the erosion damage was not addressed.

“Right now, part of the ravine has collapsed… no less than 20 feet from the building,” Pitts said in June 2021.

Throughout most of last year, land behind the health center was barricaded off for safety reasons.

Now, the LaDOTD has completed emergency construction on erosion damage near the building to save it.

“We had to go through emergency procedures to get it done because we had a lot of concerns that another heavy rain event or a high water level from the Mississippi would have had a potentially damaging effect” to the property, Landry says.

A student apartment complex nearby also underwent emergency construction because it was at-risk of taking erosion damage.

Before work began, the drainage system beneath the student health center and student apartments was overwhelmed by the amount of water and flooding coming into that area, causing damage to the surrounding soil that held up those buildings, Landry says.

“We pulled back damaged areas where we were having fissures within the soil that was behind the building and discovered that the subsurface drainage in that area was the main cause of the problem,” he adds.

Since then, the department implemented a “complete reconstruction of the drainage system” so that water safely moves from the Mississippi to the ravine on-campus in a way that does not cause further erosion, Landry explains.

According to LaDOTD, crews installed approximately 1,200 feet of High Density Polyethylene Pipe and new catch basins to replace the old drainage system underneath the student health center and apartments.

The agency also reinforced the already damaged areas with riprap and additional soil “to make sure that the soils no longer erode beyond that subsurface drainage,” Landry says.

Erosion damage has already cost Southern University a bridge between classrooms on campus and the student residential area, as well as an extensive piece of a walkway by the ravine, Pitts said in 2021.

Southern University was awarded a $10 million grant in 2017, which the school used to build a road where the bridge used to be, with a culvert pipeline underneath the road for water to flow through.

However, those were just “Band-Aid” solutions to the erosion damage, Pitts said, and didn’t fully fix the existing damage or prevent further erosion damage from occurring.

To prevent further erosion damage along the ravine, the department is planning on building concrete mat padding along a 2,500 foot stretch of the ravine.

“It’s basically going to protect the ravine from the start of the stream to the weir drainage system,” Landry says. “You’re not going to have any erosion problems between those two sections.”

The weir drainage system will be fitted with four 9-foot-by-9-foot box culverts, which will have flap gates installed in the downstream end of the culvert. Flap gates will allow water from the ravine to flow out to the Mississippi River, but will not allow water to enter the ravine from the river side, he explains.

The department is also planning to reinforce the wall behind Southern University’s ROTC building, which had been damagedby erosion over the years, as well as install a weir drainage system on the west side of the campus by the Mississippi River. 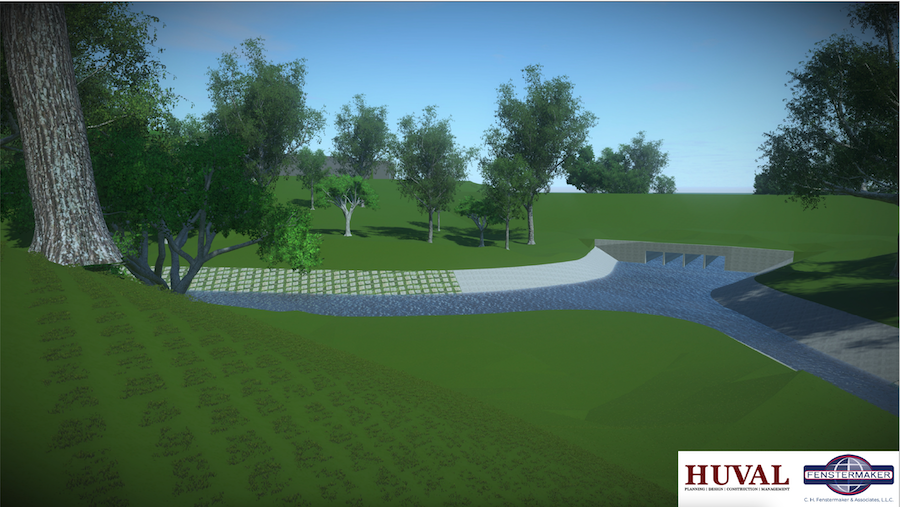 A rendering of the planned construction of concrete mat padding along a 2,500 foot stretch of the ravine. The padding will prevent further erosion and flooding damage on the land around the on-campus ravine.
Photo courtesy of the Louisiana Dept. of Transportation and Development

“The erosion on site today is predominantly caused by the rapid drawdown of the river combined with wave action from the river,” Landry adds. “With the weir installed, the wall at ROTC will be repaired and protected from continued exposure to wave action.”

Before they can install the concrete matte padding, LaDOTD has to clear out debris to get the land surrounding the ravine at a consistent slope before it can be reinforced with concrete.

The concrete mat padding construction project has yet to be started, but “it’s going to take a couple years to be completely finished,” Landry says.

The goal is to finish all construction by 2026, moving “forward with the remaining scope as per the requirements of the federal process,” he explains, as the project cannot be pushed back any longer.