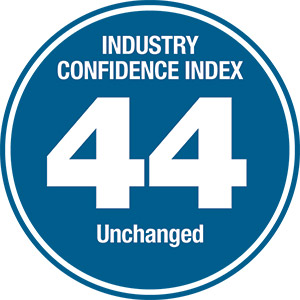 For much of the third quarter, watching the U.S. economy has felt like some strange version of Heisenberg’s uncertainty principle—the more you look at where the economic indicators are, the less sure you are about the direction the economy is heading. Unemployment has stayed low and jobs are up, but inflation is still rampant. In the face of mixed economic news, it’s perhaps no surprise that ENR’s Construction Industry Confidence Index remains unchanged from last quarter, at a rating of 44.

The index measures executive sentiment about where the current market will be in the next three to six months and over a 12- to 18-month period, on a 0-100 scale. A rating above 50 shows a growing market. The measure is based on responses by U.S. executives of leading general contractors, subcontractors and design firms on ENR’s top lists to surveys sent between August 8 and September 12.

Confidence in the economy as a whole recovered somewhat in Q3, coming in at a rating of 30. That is 7 points higher than last quarter’s record low, but still the third lowest reading in the CICI’s history. Firms are somewhat optimistic for the future. 65.5% of respondents see either an improving or stable economy 12-18 months from now, up from 48.2% last quarter.

The results of the latest Confindex survey from the Construction Financial Management Association (CFMA), shows a slight increase in pessimism among construction CFOs. Each quarter, it polls CFOs from general and civil contractors and subcontractors about markets and business conditions. The Confindex is based on four separate financial and market components, each rated on a scale of 1 to 200. A rating of 100 indicates a stable market; higher ratings indicate market growth.

The Confindex fell 2.8% between Q2 and Q3 of 2022, down to a rating of 103. The “current confidence” index also fell, down 5.4% to a 106 rating, and the “financial conditions” index tumbled 6.5% to 101. The “business conditions” index rebounded slightly after a major drop last quarter, up two points to a 106 rating. “All indices are down significantly in comparison to last year’s third quarter reading,” says Stuart Binstock, CFMA’s CEO.

Despite the dip in confidence, construction CFOs may not be pessimistic enough, thinks CFMA economic adviser and CEO of economic consultant Sage Policy Group Anirban Basu. “I think we’re headed into a recession in 2023, and I think it’s going to be a deep recession.”

Whereas CFMA respondents have previously reported strong profit margins, this quarter the number of firms reporting improved profit margins has been “virtually offset” by those who report they have not improved, he says. With construction costs still rising “it’ll be more and more difficult for those contractors to pass along those cost increases to their project owners,” he adds. The “year ahead outlook” index of CFMA’s survey fell below 100 this quarter and is down 18.2% when compared with last year.

The full impact of the conflict in Ukraine is also yet to be felt, he thinks. “When we came into the year in North America, natural gas prices were $3 per million BTU; recently we have been in the eights,” explains Basu. As cold weather hits and stockpiles dwindle in Europe,“then you’ll see a real crisis,” he says. That may affect European factory outputs, as companies look to conserve gas.

Even if confidence in the construction market overall is low, confidence in many individual markets remains high. The water/sewer and waste (a 72 rating), industrial/manufacturing (68) and hospitals/health care (68) markets posted the highest numbers.

Basu sees a rising multifamily market, at least in the short term. “Rising mortgage rates are good for the apartment market, because people, at least for limited periods, can’t buy homes,” he says. According to Freddie Mac data, 30-year fixed mortgage rates are at 6.29% as of September 22. That number was 3.22% on January 6.

At the other end of the spectrum, confidence remains low in the retail (a 28 rating) and commercial offices (29) markets. Basu does not see that changing, citing data from Castle Systems, which provides security to 2,000 buildings in America. “On average in June, about 41% of workers swiped into their office,” he reports. He foresees an excess supply of office space in the near future. The one exception may be banks. “August was the fastest leasing of New York City office space during the pandemic, and that in large measure is because banks are demanding their people come back,” the Sage CEO says.