California’s high-speed rail plans are chugging forward. The state authority behind the rail system OK’d an environmental review of an estimated $4-billion stretch that would extend the line 43 miles from San Jose north to San Francisco.

It remains to be seen when this work can go out to bid. A construction start is still three to five years away, and will depend on when funding is available, says Boris Lipkin, the California High-Speed Rail Authority's northern California regional director.

The authority currently has a grant application filed with the U.S. Dept. of Transportation to cover costs of design for the 43-mile San Jose to San Francisco section and three others that have received environmental approval.

Construction is currently underway on 119 miles of high-speed rail in the Central Valley. The authority’s board recently approved design contracts worth $41 million for the Merced-Madera section and $44.9 million for Fresno-Bakersfield. In April, the authority's board of director's certified the environmental review of the San Jose-Merced section.

“We now have nominal clearance all the way from downtown San Francisco into Los Angeles County, which is huge from a spanning-the-state standpoint,” Lipkin says. “But also it's really part of the statewide vision of what this project can do in terms of tying communities together [while] reducing travel times and reducing emissions.”

The authority estimates it will cost about $4 billion to build the San Jose-San Francisco section, says Lipkin. There could be some opportunities to lower that by optimizing plans during design, he adds.

Proceeding northwest from the Diridon high-speed rail station in San Jose, which was previously approved, this section would add stops in Millbrae near San Francisco International Airport and in downtown San Francisco at Fourth and King streets. Plans call for that downtown station to be used only temporarily until the Transbay Joint Powers Authority extends the electrified rail corridor to Salesforce Transit Center, which would then serve as the terminal station for the high-speed line.

The board selected its preferred alternative for the section, which would build on commuter rail service of Caltrain’s electrification project corridor and minimize impacts on areas along its route compared to a second option that had been considered. The rejected option would have added about 6 miles of additional passing tracks, records show.

“We were able to really drive those impacts even further down where I think we would have just a handful of property impacts that we ultimately have at the end of the project,” Lipkin says. “For 40 miles, that's a big deal.”

About 17.4 miles of Caltrain track would need to be modified to support speeds up to 110 mph. The projects would also include construction of stations and a light maintenance yard. 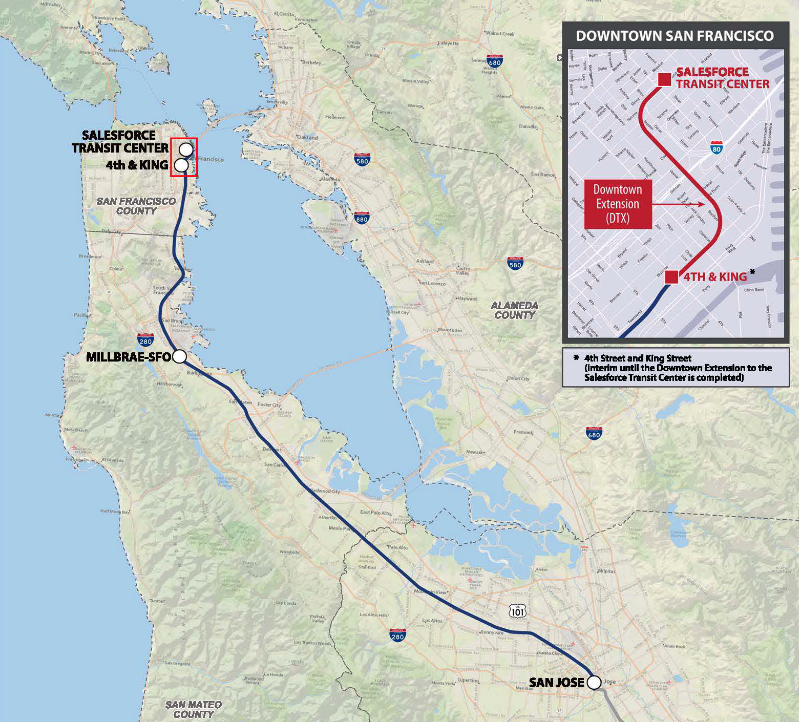 The San Jose-San Francisco section would include about 43 miles through mostly urban areas.
Map courtesy of California High-Speed Rail

Each of the high-speed rail line’s sections has offered unique challenges because of the varying geographic and built conditions, and required different solutions, so the authority has used several project delivery methods. In the Central Valley, work was broken under three big design-build contracts. But for stations where the authority wants more control over the customer experience, Lipkin says they have used design-bid-build arrangements. Contracts for the San Francisco-San Jose section could follow those examples, or use a different method, he adds.

The San Francisco-San Jose section would run through urban areas. Because the line will share Caltrain’s footprint, Lipkin says the agency has been a close partner on this section. Construction will need to work around Caltrain’s service to keep their trains running amid the work.

Only two more sections still need environmental review—Los Angeles to Anaheim and Palmdale to Burbank. Lipkin says the draft environmental statement for the latter should be released within the next few weeks.

The authority also has proposed plans for an eventual second phase, which would include adding high-speed rail lines from Merced to Sacramento on the service’s northern end, and lines farther south to San Diego.