In 2017, Clark Construction, based in Bethesda, Md., became the first general contractor to require personal protection headgear with a higher safety standard than traditional hardhats on all of its projects. In May, Clark extended that requirement to all subcontractors working on their projects.

The contractor—working on jobs such as the new single-terminal KCI Airport in Kansas City—will require all craftworkers to wear safety helmets that meet higher performance standards and are equipped with integrated four-point chin straps on all of its new projects starting August 1. Clark is believed to be the first U.S. contractor to institute such a policy.

For Safety Week 2022, Clark partnered with manufacturers KASK, JSP, and Milwaukee Tool to distribute over 1,500 safety helmets to craftworkers on all its projects. “We need to have folks equipped with helmets and we don’t want people to feel like they have to incur extra costs,” says Kris Manning, Clark’s senior vice president in charge of safety. “We planted the flag and said after August 1st, any of our new projects [will require them]. It allows all of our trade partners to price this into the job and not feel like we’re forcing it down upon anyone.” 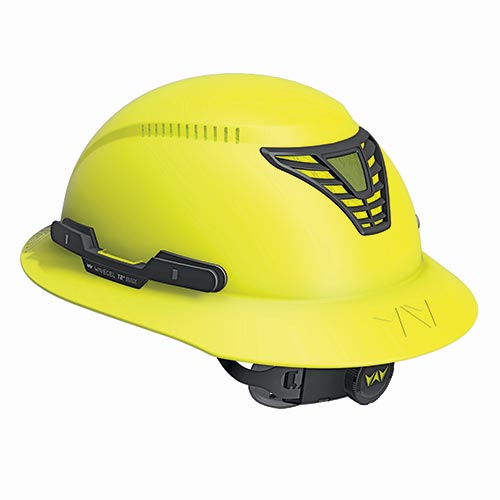 WaveCel has competed with MIPS for years in cycling; now it enters the construction market.
Image courtesy WaveCel LLC

Manning and Clark’s regional safety director Seth Randall begin investigating a new helmet policy in 2015 due the prevalence of worker falls and traumatic brain injuries across the industry. Many of the accidents were simple falls that could’ve resulted in no injury had the worker’s hardhat not fallen off.

“Why would we, in an environment that’s dangerous, want folks to wear a hardhat when there are better options available?” Manning asks. “Seth has a picture that he uses in presentations of his kid with a hardhat on riding his bike.”

Some manufacturers have designed helmets that have a separate lining that further isolates the brain from shocks. Last year, Ergodyne began offering a helmet with the Multidirectional Impact Protection System (MIPS), an innovation meant to better isolate the brain from shocks during falls and collisions. Protective Industrial Products was the first U.S. manufacturer to offer a MIPS-equipped construction helmet last summer.

The main competitor to MIPS, WaveCel LLC, has now followed MIPS manufacturers from bicycling to the construction market. Giro and Bell are two manufacturers of bicycling helmets with MIPS technology, which was first developed for cyclists more than 20 years ago.

The WaveCel T2+ MAX vented hard hat and the WaveCel T2+ PRO were released June 27 in the U.S. by Portland, Ore.-based WaveCel for use in construction. WaveCel claims its proprietary lining reduces rotational and linear force while MIPS only reduces rotational force. However, there is no objective test data available yet to determine which approach is more effective, and MIPS has questioned WaveCel’s claims.

And while four-point chin straps are standard on MIPS helmets, they’re only available as an option on WaveCel’s, which are designed more in the form factor of traditional hardhats.

“The sooner we can provide this type of protection for our employees the better,” says Todd Guthrie, president of W.E. O’Neil Construction in Chicago in a statement about the contractor’s use of WaveCel. “Safety is not an option, and we must provide the highest quality of protection available in the marketplace.”

Clark’s Manning says that the building trades have been receptive to the contractor’s overtures to switch their helmets. “We told them this is an investment that we want to make in your safety,” he says.” The response was overwhelmingly positive. “You do have some craftworkers that maybe don’t want to do that, but by and large people understand the risk. They want to wear it.”