When the team of workers from PC Construction completed their work on the $321-million Atlanta Water Supply Program project in late 2020—five years after work first began—they knew they’d been through something exceptional. Needed urgently to secure Atlanta’s then-threatened drinking water supply, the sprawling effort to transform a one-time quarry into a 2.4-billion-gallon raw water storage facility—among other tasks—would prove a singular accomplishment to some of PC’s crew and other project team members.

Calling it the “best job ever” in his career is Dan Nawrocki, senior vice president for PC, and a 40-year veteran of the water/wastewater construction business—including nearly 17 years as a senior project manager with Archer Western. “Nothing that I’ve ever worked on in 40 years comes close,” he says.

Working under that deadline pressure, the contractor nevertheless would “find millions in savings to make the project affordable,” Ade Abon, senior watershed director for Atlanta’s Dept. of Watershed Management, stated in a testimonial submitted to ENR Southeast. “Their greatest strength is the accuracy and dependability of their cost models,” he added, noting that the firm’s focus on collaboration and expertise with construction management at-risk project delivery is “what sets them apart from their competition.”

“We had to overcome multiple significant schedule cost and technical difficulties,” Ajy says, crediting what he describes as a high-functioning team, led by PC and its joint-venture partner H.J. Russell. With a strongly collaborative mindset, the engineer and contractor often batted around numerous ideas aimed at solving the string of challenges endemic to the project. With that approach, “We’d be able to filter through and validate the good ones and throw away the bad ones and develop some really good solutions,” he says.

Since putting the Atlanta project—one of its largest-ever Southeast contracts—in its rearview mirror, PC Construction has had to quickly focus on the busy, and increasingly complicated, road ahead. 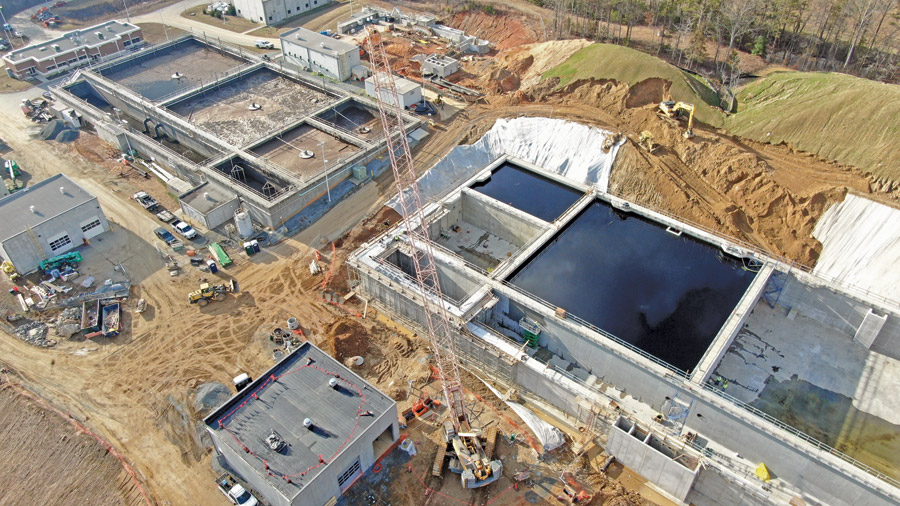 An Array of Challenges

Across the Southeast, as PC Construction and other water/water treatment contractors can attest, a growing array of future projects addressing critical—and sometimes urgent—water-related needs awaits. As was the case with the Atlanta water supply project, delivering security for communities’ drinking-water needs likely will be a driver of many future efforts throughout the Southeast.

In Stuart, Fla., for instance, PC started construction last December on a $16.7-million contract to deliver a 1.5-million-gallon-per-day reverse-osmosis (RO) treatment facility as an addition to the existing water treatment system. Funded in part by a South Florida Water Management District pilot program for alternative water supply projects, the job will deliver a new RO process and boost the facility’s overall treatment capacity to 3.0 mgd.

“Their greatest strength is the accuracy and dependability of their cost models.”
—Ade Abon, Senior Watershed Director, Atlanta Dept. of Watershed Management

Importantly, the project includes construction of a wellhead for an existing drilled onsite Floridan aquifer water supply well. The city of Stuart had applied for pilot program funding in 2016, citing future saltwater intrusion impacts to its existing wellfield as a result of projected future sea-level rise and because the location of certain wells were located near brackish waters.

Additionally, Stuart also noted the need to address the Environmental Protection Agency’s then-new Unregulated Contaminant Monitoring Rule covering emerging contaminants, some of which the city of Stuart had “consistently detected” since beginning monitoring. In response to the new EPA rule, Stuart shut down four wells that contained these contaminants at a level “far exceeding the EPA’s advisory limit,” according to the city’s application for funding, thereby limiting the city’s water supply.

The Stuart facility that PC is delivering will utilize RO technology designed to filter out these contaminants, increasingly well known by their abbreviations: PFCs, PFOS and PFOA.

The city of Stuart says the project, scheduled to complete in 2023, will enable it to diversify its water supply options, reduce pumping in a surficial aquifer, limit impacts to wetlands and potentially reduce saltwater intrusion concerns.

If successful, the technology could proliferate throughout Florida, and beyond, says Nawrocki.

Population growth is driving other kinds of water/water treatment projects across the Southeast.

For instance, in Stanley, N.C.—about 30 miles from fast-growing Charlotte—PC is targeting a fall 2022 completion of a $29.9-million, 1.7-mgd expansion and renovation for project owner Lincoln County that will boost its existing Killian Creek wastewater treatment plant’s capacity to 6.6 mgd. And in Atlanta, PC is leading a $54-million contract to decommission the Intrenchment Creek Water Reclamation Center and add primary clarifiers to the South River WRC. 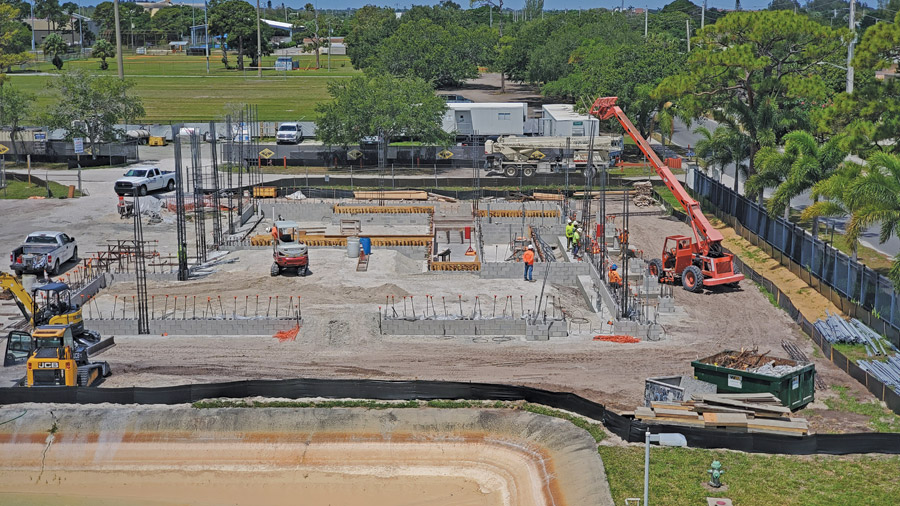 In Stuart, Fla., PC Construction is delivering a 1.5-million-gallon-per-day reverse-osmosis treatment facility in an effort to address impacts related to saltwater intrusion and contaminants in the city’s water supply.
Photo by Brian Grassel, courtesy PC Construction

For 2021, PC Construction reported notable gains in the Southeast, starting with $200 million in new contract awards. Overall, for the Southeast region, the contractor reported a roughly 10% year-over-year gain, reporting roughly $37.1 million in revenue.

For Jay Fayette, the contractor’s president and CEO, much of the company’s success comes from the commitment to collaboration that PC team members bring with them. Whether they’re leading a project via an alternative delivery method such as construction management at-risk or design-bid-build, the ability to work closely with owners to find cost savings and overcome continuing supply-chain challenges is paramount to success in today’s construction market.

In Fayette’s opinion, the company’s pervasive focus on collaboration springs from the fact that all roughly 450 employees are owners in PC’s ESOP. 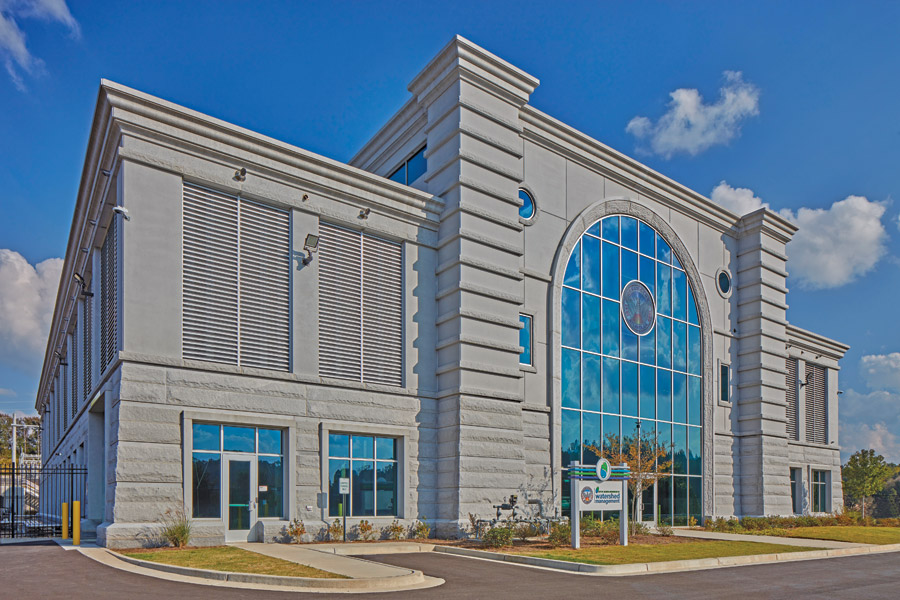 The issue of diversity, equity and inclusion has become another major focus for PC since the killing of George Floyd, says Fayette.

In response, PC “immediately” established an internal board focused on DEI and instituted it as a core value affecting hiring processes and benefits. For example, now hourly and salaried workers alike receive the same company benefits. In a September 2020 company blog post, Fayette promised to lead the firm to “do better and be better” by committing to “rally our teams to take the steps necessary to ensure PC becomes a truly diverse and inclusive workplace.”

For these achievements and initiatives, ENR Southeast recognizes PC Construction as its 2022 Contractor of the Year.