With approximately 120 employees in three MidAtlantic offices, Alpha Corp. typically falls into the category of a midsize regional design firm. But since its founding in 1979, the Dulles, Va.-based company has consistently proven its ability to compete for and win projects typically associated with larger counterparts.

Currently, Alpha is providing civil/site engineering design for expanding mid-river terminal islands as part of the Virginia Dept. of Transportation’s $3.8-billion Hampton Roads Bridge-Tunnel Expansion. In Bethesda, Md., Alpha is preparing design-build bridging documents for the $600-million, 557,000-gross-sq-ft expansion and renovation of the Surgery, Radiology and Lab Medicine Building at the National Institutes of Health.

Alpha has also handled a variety of assignments for the National Park Service. They range from reconstructing a 55-year-old concrete path to provide safe access to the historic Burnside Bridge at Antietam National Battlefield Park in Sharpsburg, Md., to the two-phase, all-discipline renovation of the Belmont-Paul Women’s Equality National Monument in Washington, D.C. 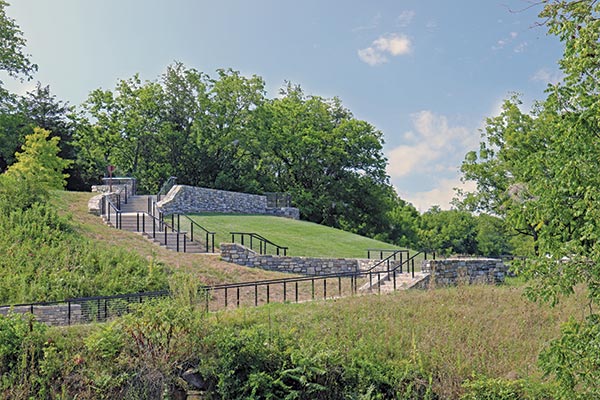 These and other efforts have contributed to a 50% organic increase in Alpha’s firmwide revenue over the past three years. Its civil and structural engineering departments have seen revenue grow by nearly 25% during 2021, according to the company. Alpha ranks 116th on this year’s ENR MidAtlantic Top Design Firms list, with $4.13 million in regional revenue compared with last’s year’s rank of 124 with $2.47 million in revenue. The previous year, the firm ranked 115 with $1.89 million.

But more than just good numbers led to the firm’s selection as ENR MidAtlantic’s Design Firm of the Year for 2021. Kathleen Linehan, Alpha president, says that while being one of the industry’s few woman-owned businesses occasionally offers advantages for certain types of set-aside contracts for minority and women-owned firms, most of Alpha’s selections are earned on the firm’s fundamental merits.

“We’ve always had to compete with the big boys,” Linehan says. She adds that the keys to Alpha’s success are no different from qualities that distinguish any other engineering firm.

“It’s nothing short of doing excellent work,” she says, “selling ourselves well to our clients and making sure they understand we bring the best resources to them—we’re dependable, we do great work and that’s a relationship we can keep and build on.”

Johann Dobak, Alpha vice president and leader of its civil engineering team, says the firm has a knack for serving high-end, demanding clients, particularly when they need to undertake complex projects in active campus environments. In addition to NIH and the National Park Service, Alpha’s long-standing clients include the Metropolitan Washington Airports Authority (MWAA) and the U.S. State Dept. Bureau of Overseas Buildings Operations.

“You don’t always see firms our size with both design and construction expertise,” Dobak says.

One area where Alpha strives to keep pace with industry peers is innovation, an asset that Linehan says has come to be expected by clients. “Everybody wants you to bring ideas and ways to help them do their business better,” she says.

“It goes to the highest level. They’re in the trenches with us to figure things out.”
—Moe Wadda, Design Department Manager, MWAA

Moe Wadda, MWAA design department manager, says that while his authority looks to consultants like Alpha to meet “perennial requirements” such as timely delivery of services, collaboration and managed costs, “we’re now highlighting sustainability and climate change.” During Alpha’s five-year task order contract with MWAA, Wadda has appreciated the firm’s responsiveness and ability to anticipate needs and solve problems. “It goes to the highest level,” he says. “They’re in the trenches with us to figure things out.”

To stay on top of the ever-changing range of solution technologies and approaches, Alpha engages in a variety of industry and innovation-focused collaborations, such as the Northern Virginia Smart Region Initiative. Alpha’s work with Virginia Tech on the Solar Decathlon Design Challenge has concentrated on achieving net-zero energy use in a highly challenging local environment, such as Alexandria, Va.’s 18th-century City Hall.

Alpha is also teaming up with immersive reality and project controls software providers in efforts that the company says will lead to new services, expanded capabilities and greater efficiencies to its customers.

Linehan is particularly proud of the diversity throughout Alpha’s staff, an inherent part of its culture. She credits that culture to the leadership of Kate Lindsey, Alpha’s chair and chief executive. Lindsey took the helm of Alpha in 2013 after the death of her husband, Jeff, who was then president and CEO. In addition to Linehan, women also hold many other top Alpha positions, including Michelle Parker, chief financial officer, and Lara Hegler, who was recently hired as chief operations officer.

“It speaks to the fact that we genuinely have an open culture and embrace people who bring different ideas and different points of view and perspectives to our company,” Linehan says. “We know our clients embrace and benefit from that as well.”

“For us, it’s been very easy to be inclusive and diverse because that’s who we are.”
—Kathleen Linehan, President, Alpha Corp.

While Alpha will continue to foster diversity, she adds, “for us, it’s been very easy to be inclusive and diverse because that’s who we are.”

Alpha’s culture is also demonstrated in its community and charitable activities, which include support for Lombardi Women, an organization committed to assisting the Nina Hyde Center for Breast Cancer Research at Washington, D.C.’s Georgetown Lombardi Comprehensive Cancer Center.

Alpha has also supported youth STEM programs and participated in local food drives. In addition, the firm partners with ARK365DMV, an organization that provides support and services to underserved people and communities throughout the District of Columbia, Maryland and Virginia area. The firm has also donated laptops to children in the Anacostia-AMP Outreach & Empowerment Center in D.C.


The power of people

Though Alpha Corp. has made great strides in a highly competitive region, the company’s leadership sees talent as the key to sustaining that growth.

“A lot of us in the industry are looking at the next two years and wondering how we’re going to manage our workforce,” Linehan says, adding that recruiting and retaining the best will only get more challenging and more expensive.

“But at the same time, there are a lot of talented people who are seeing the opportunity and interest in doing something different,” she says.

Some of those people already work at Alpha. Along with Hegler, who has an extensive background in transportation, the firm recently added industry veteran Mike Pampalone to lead design and program/construction management services for federal clients.

These early talent successes aid what Linehan sees as a lengthy battle for talent. But she says it’s a goal that can be achieved as long as new and existing staff members feel part of a shared mission while also growing in their careers.

“We’re going to be working hard at it for the next couple of years,” Linehan says. “We have to.”

Other Alpha Corp. Projects Include:

ICU Renovation
Beckley, W.Va, Medical Center
The initial plan to renovate the hospital’s existing intensive care unit pivoted to a full relocation/space upgrade when the owner and project team determined that an alternate wing in the hospital would be a better fit for the facilities. The design process, now underway, includes analysis of the existing concrete structure, taking special consideration of new and increased loading associated with new HVAC and MEP systems as well as additional ICU equipment.

Design Firm Grows From the Ground Up