In the battle to combat sea-level rise, the city of Norfolk, Va., finds itself on the front lines. The city, which officials say is the urban area most at risk from the looming threats of rising sea levels on the East Coast, is going beyond just conducting studies of future impacts and is taking action. In the Ohio Creek Watershed project, the city is employing a multi-layered approach to mitigating current and future flooding concerns. Design started on the $122-million project in 2016, and construction is expected to be completed in January. It aims to help mitigate both regular nuisance flooding and storm-surge flooding in the historic Chesterfield Heights neighborhood. The strategies deployed will offer city officials valuable insight for future planning while creating best practices that other flood-threatened urban centers can follow.

“By bringing all of these strategies together into one neighborhood, we are providing a test bed in Norfolk that they can work with for decades to come,” says Edgar Westerhof, U.S. flood risk and resiliency lead at Arcadis, which led the project’s design team. 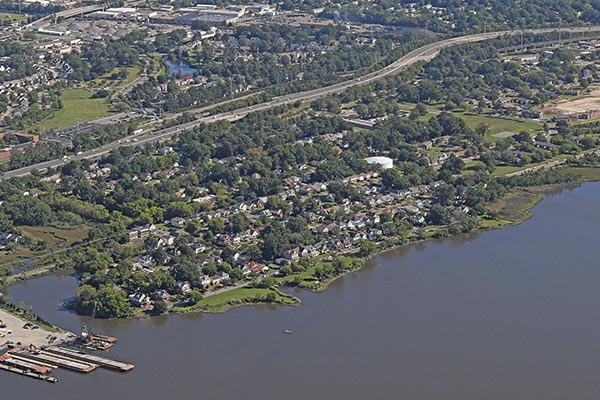 Sitting Duck | Before the project team started construction in 2018, the low-lying coastal neighborhoods were prone to extreme flooding.
Photo by Skyshots

Set along the edge of Ohio Creek—a tributary of the Elizabeth River—Chesterfield Heights has seen wave action and storm surge increasingly erode its shoreline in recent decades. Additionally, rainstorms regularly cause nuisance flooding on neighborhood streets because aging infrastructure is unable to handle stormwater effectively.

Flooding also raises safety concerns. The neighborhood, which is partly cut off from the rest of the city by Interstate 264, can only be accessed by two streets. During flooding events, those roads may be impassable.

“You felt how deep [the community’s] connection with the water goes. That’s not something you want to take away with a big wall. We wanted them to stay connected.”
Edgar Westerhof, U.S. Flood Risk & Resiliency Lead, Arcadis

Given the city’s growing need for solutions, the state in 2017 was able to secure a $112-million resiliency grant through the Dept. of Housing and Urban Development’s National Disaster Resilience Competition. As part of conceptual design, the city and designers worked with the community to devise a strategy that would not only address flooding concerns and make the neighborhood more resilient, but also provide other improvements for the community.

“During our dialogue with the community, we toured around the neighborhood and you felt how deep their connection with the water goes,” Westerhof says. “That’s not something you want to take away with a big wall. We wanted them to stay connected.”

The final design concept called for a mix of hard infrastructure and natural solutions. Near the shoreline, crews would construct more than 1,000 linear ft of floodwall, along with more than 2,000 linear ft of living shoreline. Based on National Oceanic and Atmospheric Administration sea-level rise projections, an earth berm was built to an elevation of 12 ft. It extends from the floodwall, across the shoreline and into the neighborhood. The combination of floodwall and berm create a continuous coastal defense system for the entire community. 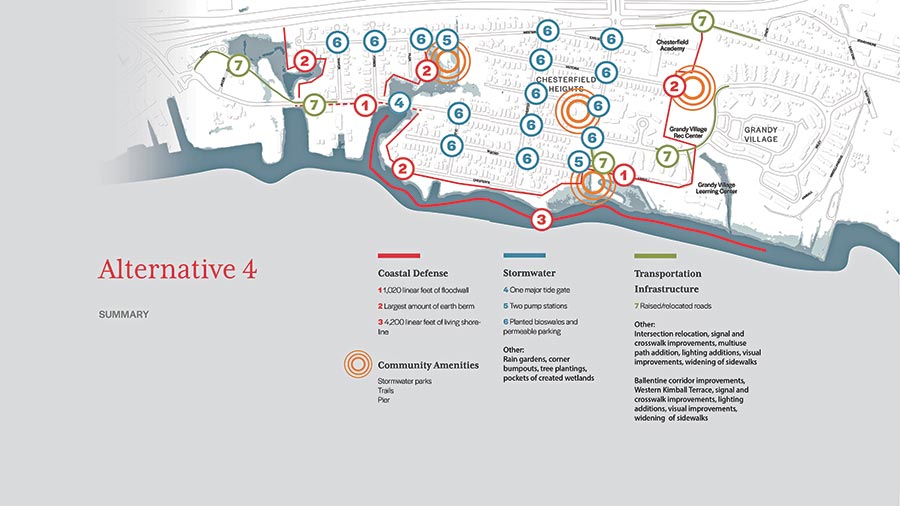 The berm reaches as much as 5 ft above street level, but it does not completely cut off the community from its water view, says Kimberly Blossom, environmental scientist at VHB, which performed environmental compliance and designed the living shoreline.

“The design team brought in hay bales and stacked them so they could demonstrate the height to the community,” she says. “What we found is that the porches on most homes are at about 5 feet [above street level], so most could still see well over the berm. It helped them understand things better and calmed some nerves.”

At the foot of the berm along Ohio Creek, the team designed a living shoreline to provide a natural buffer against wave action and surge. Blossom says the design was largely based on studies of wave energy.

Along the side closest to the Elizabeth River, a hardened approach was used, incorporating large areas of rip-rap stone to armor the shore. In areas subject to less wave action, vegetated shoreline was installed. Oyster reefs were also created in some areas with rip-rap fill, providing small breakwaters just offshore.

Although the living shoreline is located on the other side of the berm from the neighborhood, the community can walk along the berm or gain access to a new fishing pier to better experience the new shoreline. 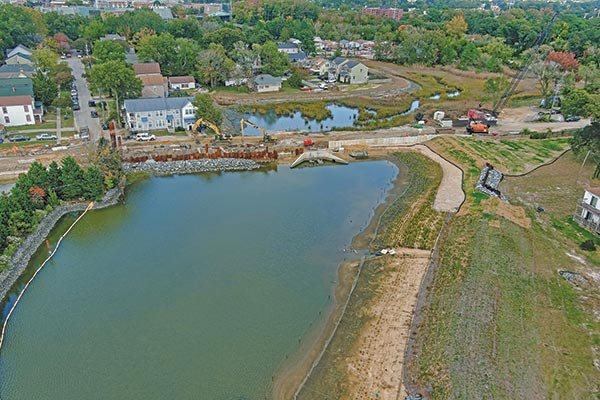 Roll Tide | The project team incorporated a tide gate into the floodwall, which can be operated by city staff, as needed, in the event of a storm.
Photo by Skyshots

Designers added a tide gate to the floodwall that can be operated by city staff, as needed, in the event of a storm. As part of that project, VHB also enhanced an existing marsh on the neighborhood side of the gate, where water will be able to move in and out as needed.

Although walls can keep water out, they can also keep water in, Westerhof notes. As a result, numerous solutions were designed to help alleviate flooding, including two large pump stations. Stormwater systems were also improved in the neighborhoods, with new large-diameter drainpipes installed along streets that are already prone to nuisance flooding. Planted bioswales and permeable pavers were also added to help convey stormwater. 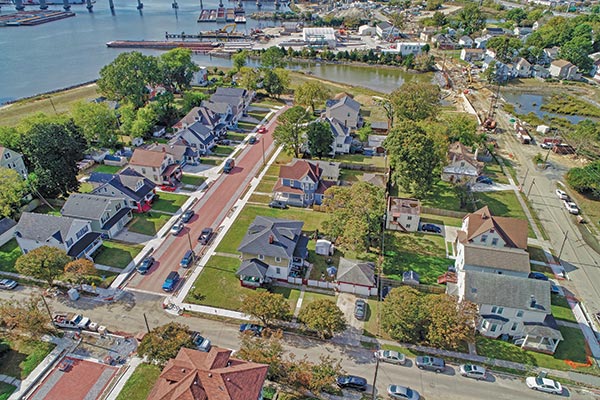 To address access issues, roadways that regularly flood were raised. Because the neighborhood had limited access to begin with, existing roads needed to be kept open while construction crews built raised roadways on new alignments, including a new 30-ft span precast concrete bridge.

Sidewalks and paths were also added to expand transportation options, helping to improve access to a light rail station located just outside the neighborhood.

Green space was converted to “stormwater parks,”  which also help capture runoff and lessen flooding. The strategy provides a public amenity, too. The largest of the parks is an area adjacent to a school, which has been converted to play fields once the area was graded to alleviate standing water and help better direct runoff.

HUD funds made the project possible, but they came with stipulations that added early challenges. The National Environmental Policy Act process had to be completed for the project to be eligible for funding. That meant the project needed to be well into design by that point. HUD also required that the funds be spent within a five-year period.

The city contracted with MEB in 2018 as the construction manager at-risk for the project. At that point, however, Arcadis was deep into designs. “[Arcadis was] well past the conceptual phase when we got involved,” says Tim Griffin, project executive at MEB. “They knew where berms and concrete walls were going. They had narrowed down the scope to two pump stations. We didn’t have the ability to impact the design much.”

MEB joined the project as material and labor costs were increasing significantly. As a result, MEB’s guaranteed maximum price came in over budget and the team needed to conduct a six-month value engineering process. “In hindsight, having the construction team completely separate from the design team cost the project some time,” says Kyle Spencer, acting chief resilience officer for the city of Norfolk. “Right as we reached 100% design and release of funds from HUD, steel tariffs took effect. We had huge cost differences.”

The pump stations proved some of the best opportunities to trim the budget. The foundation system was originally designed with piles, but the team was able to redesign it as a mat slab system.

“The buoyant factor of the pump station and the depth underground allows you to not have piles under structures like that in this area,” Griffin says. “We put geotechnical fabric down and then 2 feet of stone underneath.”

The below-grade structure uses cast-in-place concrete, and above grade, the stations are masonry structures, he says.

To construct the pump stations, crews excavated roughly 30 ft down. Because the project was located at the water table, Griffin says the team installed interlocking sheeted cofferdams to keep work areas dry. “With the soils here, there is a sandy layer between 5 and 10 feet down,” he explains. “Then after 10 feet, you get into some heavy clay materials. Water does not move through that well.”

Logistically, Griffin says that installing new stormwater infrastructure under neighborhood streets provided the greatest challenge, particularly once the schedule had to be compressed following the lengthy value engineering process. “A lot of this job is about being respectful of the residents while getting the job done,” he says.

Griffin says extensive water and sewer relocation was required so crews could install new storm pipes. Griffin says crews had to work up and down streets multiple times to relocate and install new water mains and sewer mains. After those were relocated, crews went back in to install the new 54-in. storm drain. At various locations, crews also installed bioswales and permeable pavers. All of this was done while trying to maintain traffic flow and residents’ access to their homes.

“That is what’s driving the schedule within the neighborhood,” he says. “In some instances, we could do one side of the street at a time, but it’s a tight neighborhood and you have a 54-inch storm drain that goes down the middle of the road. So you’re closing off a block at a time while making sure there was no construction going on somewhere else along the detour route around the work area.” 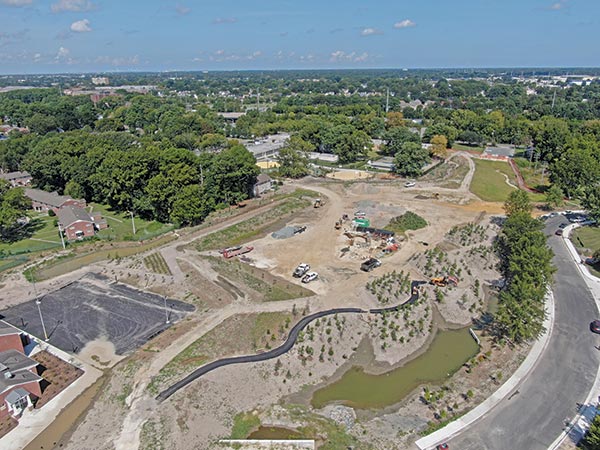 Walk in the Park | The Grandy Village stormwater park is one of the project’s green spaces that serve as shallow stormwater retention areas following a flood event.
Photo by MEB

Beyond community benefits for Chesterfield Heights, Spencer says the city of Norfolk anticipates using the Ohio Creek project as a proving ground for sea-level rise strategies that could be deployed in other parts of the city.

“It’s a good opportunity to see what’s replicable,” he says. “It shows the art of possible.”

Spencer adds, “For the neighborhood, it’s about staying on top of how it’s performing. We just don’t want to walk away when we’re done. We want to check back in and see if there are issues. That’s something we’ll keep track of as it moves forward.”

In the big picture, Westerhof sees the impact of Ohio Creek resonating far beyond southeastern Virginia as other communities advance from studies and planning to developing infrastructure. “Norfolk has stepped up early on to get shovels in the ground,” he says. “That is so vital. You can study anything you want, but eventually this is about quality of life and doing the right thing for communities under stress. This neighborhood is already seeing a higher level of protection. That’s exactly what we need.”