PLW Waterworks, a division of Webber, has been awarded three water contracts in Texas. The combined value of the contracts is $279 million.

The city of San Angelo has awarded PLW a contract for the city’s Hickory Groundwater Treatment Plant to increase production capacity to 12 mgd from 8 mgd, for a total value of $52.8 million. Completion is scheduled for early 2024.

Method Architecture, a certified minority-owned business, has acquired GSC Architects to strengthen its Austin and San Antonio presence. The firm now has more than 70 employees, including 12 registered architects and six registered interior designers located in four offices across Texas.

Burns & McDonnell is supporting Buckeye Partners LP as the engineering, procurement and construction (EPC) contractor for a 164-MW solar energy project located in Texas Hill County between Waco and Dallas.

The project scope includes construction of a 345-kV interconnection substation that will prepare energy to be distributed via the utility transmission system and will include more than 360,000 First Solar modules. It is anticipated to generate enough energy to power more than 28,000 homes annually. Construction started in April and is expected to be complete by the first quarter of 2023. 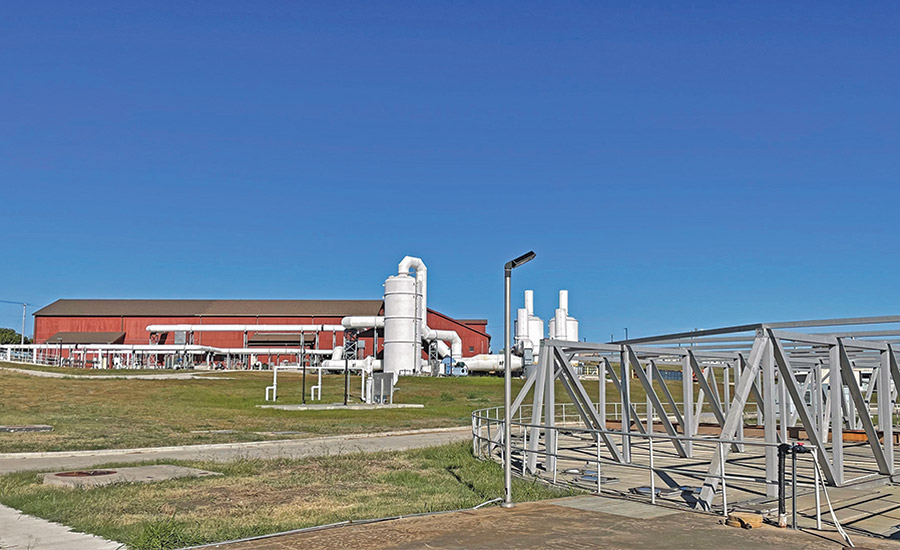 The 64-mgd Wilson Creek RWWTP is the largest plant in the regional system and the backbone of the district’s treatment capabilities. NTMWD provides wastewater services to 24 communities and 1.4 million residents of North Texas.

This project includes replacing mechanisms and evaluating the covers of primary clarifiers, replacing aging aeration blowers and expanding solids dewatering. A new aeration control building will house electrical gear to serve the new blowers and provide energy-efficient blower control for the aeration process. A key design element is the careful sequencing of construction activities to facilitate continuous operations during sitework.

Prime consultant Brown and Caldwell is leading detailed design and engineering of the upgrades. Following completion of the design phase by November 2023, construction close-out of the upgrades is scheduled for March 2026.

“I am now asking the Legislature to help us recover further from the devastating hurricanes of 2020 and 2021 by dedicating $150 million of state surplus to projects that will make us safer and more resilient well into the future,” Edwards said in a statement.

Fifteen coastal projects would receive surplus funding, including $84.5 million allocated to restoration efforts and $65 million toward hurricane and flood protection projects across 13 parishes.

This effort will support CPRA’s 2023 Annual Plan, the largest in agency history, with more than $1 billion allocated for construction and major investments in hurricane protection, sediment diversions and 23 dredging projects, according to Chip Kline, CPRA chairman.

Southland Industries Acquires The Brandt Cos.

Southland Industries has acquired Texas-based MEP contractor The Brandt Cos. Headquartered in Dallas, Brandt also has offices in Fort Worth, Houston, Waco, Austin and San Antonio.

Southland’s acquisition of Brandt unites a team of more than 5,000 individuals across 35 states, with full life-cycle expertise from engineering through fabrication and installation to post-construction services including operations, maintenance and energy services.

McCarthy Building Cos. has started construction on the Ismaili Center in Houston. This is the first Ismaili Center in the U.S. and joins six other centers in Dubai, Dushanbe (Tajikistan), Lisbon, London, Toronto and Vancouver. Texas has the largest concentration of Ismaili Muslims in the U.S. with more than 40,000 members, the majority of whom live in and around Houston. This cultural center will serve as a gathering space open to all faiths.

Located at 2323 Allen Parkway along Houston’s Buffalo Bayou, the Ismaili Center will consist of 11 acres of gardens, courtyards and terraces and a 150,000-sq-ft, five-story tripartite building featuring three eivans, or elevated open terraces.

McCarthy broke ground on the project in October 2021, with completion expected in the fourth quarter of 2024. The center was designed by U.K.-based architect Farshid Moussavi, the architect of record is Paul Westlake and the gardens were designed by Thomas Woltz of Nelson Byrd Woltz Landscape Architects.