McCarthy Building Cos. Inc. has completed construction on the city of Houston’s Northeast Water Purification Plant’s (NEWPP) Intake Pump Station (IPS). The 30,000-sq-ft raw water Intake Pump Station building includes an access bridge constructed on pilings 1,000 ft from the shore within the middle of Lake Houston. The project will add 320 million gallons per day of drinking water for the city, substantially increasing the current 80 million gal/day of treated water capacity. This is one part of the larger $1.765-billion design-build NEWPP expansion project.

The expansion of NEWPP is currently the largest progressive design-build water treatment plant project underway in Texas and in the U.S. McCarthy’s Houston Waterworks team was awarded three separate contracts on the project – the early works Central Plant foundations package, the raw water Intake Pump Station, which began in early 2019, and the balance of the Central Plant, which will be complete in 2024. The NEWPP project’s first 80MGD phase will be operational in early 2023, and the overall 320MGD plant will be in full operation in early 2025.

Underneath the main structure of the station, piles are 128 ft long and 30 in. dia, as Lake Houston has a clay bottom, and the large diameter was designed to achieve the necessary structural capacity. McCarthy self-performed each scope, as well as process equipment installation, concrete work, metal installation, and earthwork.

Lockwood, Andrews and Newnam (LAN) has been selected by the Galveston Independent School District to manage its $314.8-million bond program. The bond package will fund a new Ball High School and aquatics center, allow for middle-school campus upgrades and support the construction of the new Kermit Courville Stadium.

LAN will oversee and manage the bond program from pre-design through construction and closeout. The centerpiece of the initiative is the replacement of the historic Ball High School.

Construction is slated to begin in the fall of 2022. 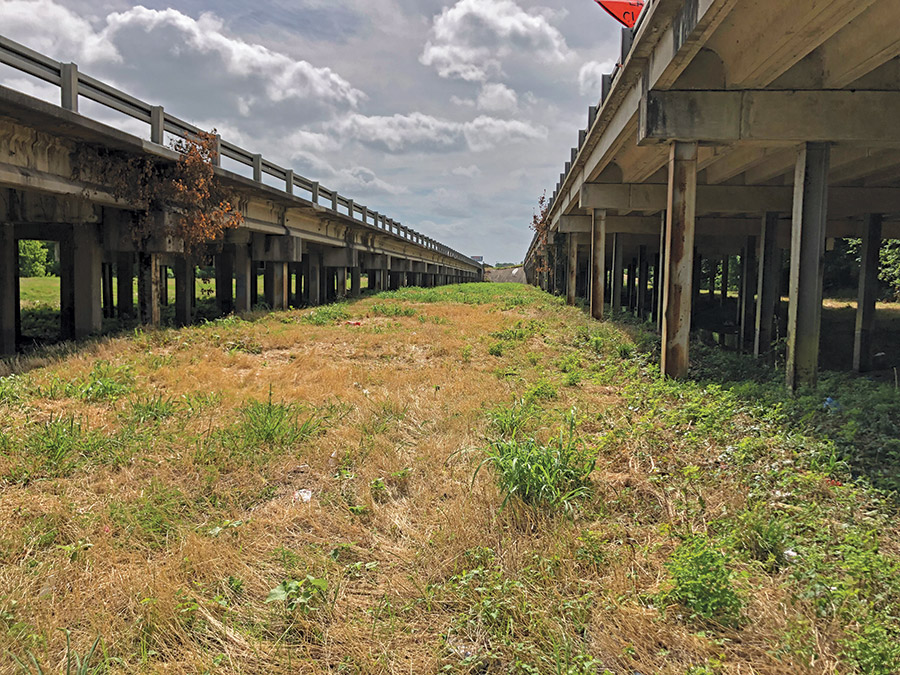 The scope of work for the Kaufman County project will consist of the widening of U.S. 80 from four to six main lanes and reconstructing the frontage roads.
Photo courtesy of Webber

The Texas Dept. of Transportation has awarded Webber four contracts with a combined value of $340 million. The projects include expansion of existing roads in Kaufman, Denton, Collin and Comal counties.

The $111-million Denton County project will begin construction in late 2022 and completion is expected in mid-2025.

The $50.4-million Collin County project will be 4.5 miles long, stretching from East of Lavon Parkway to Brown Street. This project will start in late 2022 and is estimated to be finished in early 2025.

At the end of July, the Louisiana Coastal Protection and Restoration Authority announced the completion of the West Grand Terre Beach Nourishment and Stabilization project and the Terrebonne Basin Barrier Island and Beach Nourishment project.

West Grand Terre addressed shoreline erosion and decreased storm surge protection and subsidence of the back barrier marshes to increase island longevity. The $100-million effort restored approximately 251 acres of beach and dunes and 147 acres of back-barrier marsh on the island. Additionally, rock revetments were constructed to protect the newly restored marsh from wave impacts and storm surge. Nearly 4 million cu yd of sediment was dredged to restore beach, dune and marsh habitat on the historic barrier island.

The Terrebonne Basin project restored 1,080 acres of barrier island habitat and 8.6 miles of beach in Terrebonne and Lafourche parishes. The $166-million project used funds from the Deepwater Horizon oil spill to restore 261 acres on Trinity-East Island, 252 acres on Timbalier Island, and 567 acres on West Belle Headland. Project funding was administered through the National Fish and Wildlife Foundation (NFWF), along with $3 million in state funds. The project utilized over 8.8 million cu yd of dredged sediment from Ship Shoal through a lease agreement with the Bureau of Ocean Energy Management.

An affiliate of Greystar Real Estate Partners is the equity partner. R.C. Page Construction is the general contractor for the project, with Beaty Palmer Architects as the project’s architect, Kimley-Horn as the civil engineering firm and Veritex Community Bank as the lender.

Rice University has received $57 million from the estate of Ralph S. O’Connor, who died in December 2018. Ralph S. O’Connor was a graduate of Johns Hopkins University who never attended Rice. But after he moved to Houston to pursue a career in the energy industry, he fell in love with the Rice campus.

O’Connor’s donation is the largest from an estate in the university’s history, and it is expected ultimately to be more than $60 million.

The Ralph S. O’Connor Building for Engineering and Science, now under construction on the north side of the campus, will complete the Rice University engineering quadrangle. When open in summer 2023, the $152-million building will feature five floors of state-of-the-art research laboratories, classrooms, seminar rooms and a makerspace. The common areas will include a lobby and welcoming café, and the top level will boast a reception suite and outdoor terrace.