On June 16, the Upper Trinity Regional Water District (UTRWD) celebrated the groundbreaking of Lake Ralph Hall, North Texas’ newest lake and one of the first built in Texas in decades. Named after the late longtime U.S. Congressman Ralph M. Hall, the reservoir will be located on the North Sulphur River in southeast Fannin County, just north of the city of Ladonia.

UTRWD serves approximately 325,000 residents. The area’s population is expected to increase nearly fivefold over the next 50 years.

The official start of construction marks a milestone to ensure crucial water supplies for the growing region. The groundbreaking was hosted at the site of the future Leon Hurse Dam, named for the former mayor of Ladonia and a longtime champion of the project. The earthen dam, to be constructed over the next four years, will measure approximately 2.3 miles long and about 110 ft tall as it forms a reservoir capable of storing 180,000 acre-ft of water.

The estimated $490-million project—which was financed by the Texas Water Development Board—includes construction of a 2.5-mile-long State Highway 34 bridge that will span 1.1 miles over the lake and will accommodate pedestrians and cars; a raw water pump station; a 32-mile-long raw water pipeline; a balancing reservoir; an operation/maintenance facility; and improvements and upgrades to adjacent state and county roads.

The reservoir is scheduled to begin delivering water by 2026.

Stantec was selected to provide design and engineering services for two K-12 district bond programs in San Antonio and Bastrop, Texas. These projects include facility renovations and expansions, technology upgrades and infrastructure improvements to offer more modern educational and recreational spaces for the students of these communities.

McCarthy Building Cos. has won three port construction projects along the Texas Gulf Coast. Two of the projects, which total $99 million, are for Port Houston Authority (PHA) - Bayport Wharf 6, a continued expansion of the Bayport Terminal, and Container Yard 3N at Barbours Cut Terminal. The other is a barge dock project for a private petrochemical company along the Houston Ship Channel.

The PHA Wharf 6 project at the Bayport Container Terminal in Seabrook includes construction of a 1,000-ft-long wharf that will allow for the latest generation of container cranes to unload shipping containers from neo-Panamax vessels. The project is partially funded by U.S Dept. of Transportation Maritime Administration in the amount of $21.8 million. The project scope includes the installation of drilled shaft foundations, both precast and cast-in-place concrete, crane rail installation, a ship fender and mooring system, substantial dirt work and dredging activities. Construction began in May and will last 26 months. The project is directly attached to the Wharves 4 and 5 Rehabilitation project McCarthy is currently completing.

The Barbours Cut Terminal Container Yard 3N project will add approximately 10 acres of shipping container storage at the terminal complex. This project, a rehabilitation of the existing site, will include utility upgrades, installation of high-mast light poles and a realigning of the main interterminal access road. Work began mid-May and will be complete around February 2022. Additionally, McCarthy was awarded a project by an international petrochemical bulk storage terminal services company, located within the Port of Houston. The construction project provides for the addition to an existing bulkhead wall and for the construction of a new unloading barge dock. The project began in April and is estimated to take 11 months. 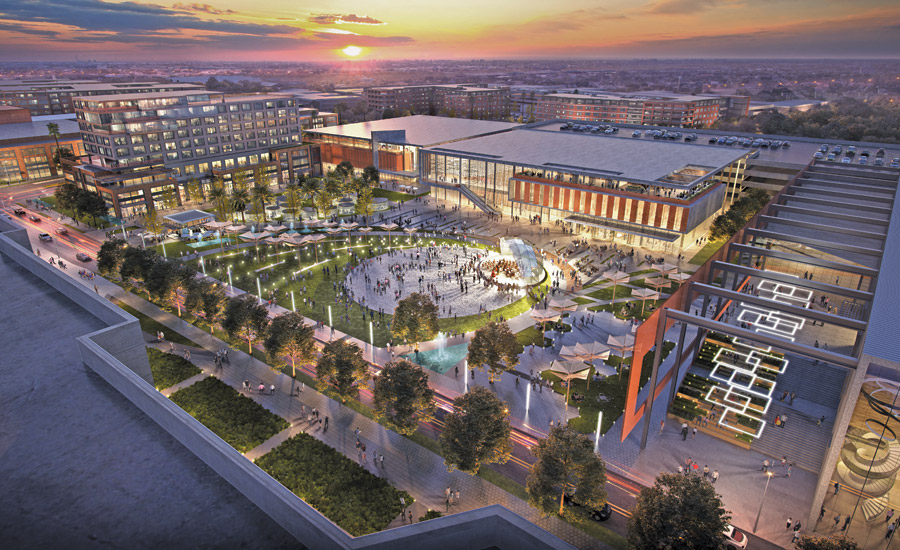 The River District will be a new residential and mixed-use neighborhood in the heart of New Orleans.
Rendering courtesy of Gensler

Gensler, in partnership with New Orleans-based architecture firm Manning, was selected as the design team to create a master plan for a residential and mixed-use neighborhood on the Mississippi River called The River District, which will be developed on land owned by the New Orleans Ernest N. Morial Convention Center.

The neighborhood will include apartments, including affordable and workforce housing, retail space, restaurants and other amenities. The River District will also include entertainment components, including a music venue, movie theater and a potential site for the new Civil Rights Museum. Predevelopment work is expected to take up to 18 months.

Ferrovial, via its subsidiaries Ferrovial Construction and Webber, were selected in May by the Texas Dept. of Transportation for the Interstate 35 Northeast Expansion (NEX) design-build project. The estimated value of the project is more than $1.5 billion, with construction starting in 2022 and spanning about six years.