This website requires certain cookies to work and uses other cookies to help you have the best experience. By visiting this website, certain cookies have already been set, which you may delete and block. By closing this message or continuing to use our site, you agree to the use of cookies. Visit our updated privacy and cookie policy to learn more.
Home » Small Architect, Mighty Projects
New EnglandNew YorkNew York Construction Companies
Design Firm of the Year

A “satellite city” designed to inject new life into downtown New Rochelle, N.Y. One of the largest affordable housing projects ever built in Jamaica, Queens. A large health center in the Bronx. All have one thing in common in addition to their New York state locations—GF55 Architects.

The small New York City-based design firm punches above its weight with projects that stand out for their design and urban planning creativity, and for helping to pump new life into outer boroughs and smaller cities beyond the glitz and hype of the Manhattan tower scene by providing badly needed affordable housing, health care and other services.

But there’s no pigeonholing GF55, either. The firm, founded in 1984 and reporting $6.13 million in 2021 total revenue, all in the New York region, is involved in a wide array of projects, including luxury mid-rise buildings in Manhattan, charter schools, health care facilities, private mansions and a cutting-edge distribution center in Queens. It ranks at No. 85 on this year’s ENR New York Top Design Firms list.

Even as the pandemic disrupted the design and construction sectors, GF55 kept growing, managing to increase revenue annually over the past two years—something much larger firms have struggled to do.

The firm—the recipient of ENR New York’s 2022 Design Firm of the Year award—earns high praise from both clients and subcontractors for its creativity in solving challenges and for being responsive to their needs.

“It’s been a very long run. It’s almost 25 years,” says Barry Gurvitch, CEO of Artimus Construction, a New York-based housing developer primarily in Harlem and Jamaica. “One doesn’t work with someone for 25 years unless the relationship is great.” 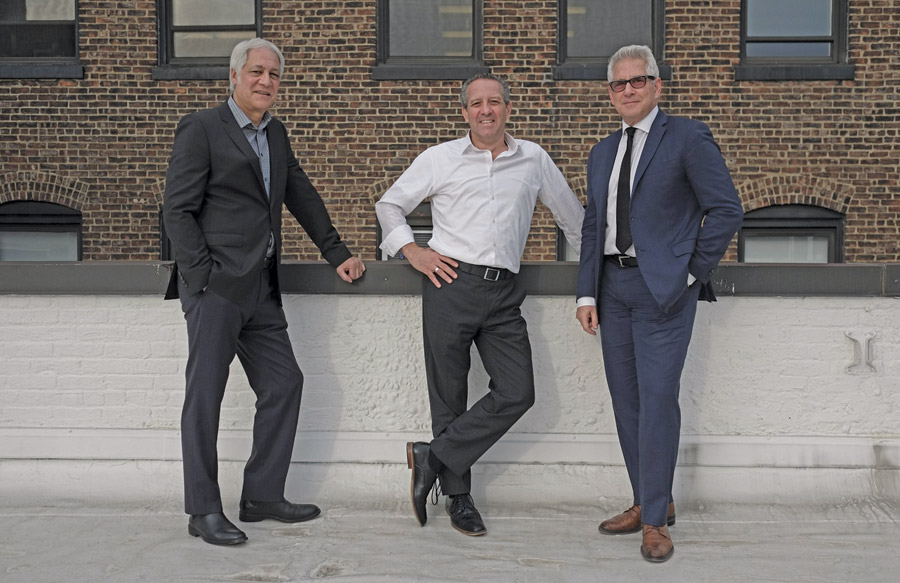 “Dave and I were just two guys who wanted to work for ourselves,” Fusco says. “We thought we had a lot of work for two guys, a lot of small projects. We knew eventually we would be doing buildings; we just figured it out as we went along.”

About a decade later they were joined by Shay Alster, now a GF55 managing partner. He was previously an architectural designer at RKK&G/The Museum Group, where he worked on the Museum of Natural History in New York and the Museo de Arte de Puerto Rico, which has locations in San Juan and Ponce.

GF55 has steadily and methodically built up its portfolio of projects over the years, starting with design work on individual apartments, then progressing to buildings of increasing size and now taking on multiple buildings on a large urban design scale. 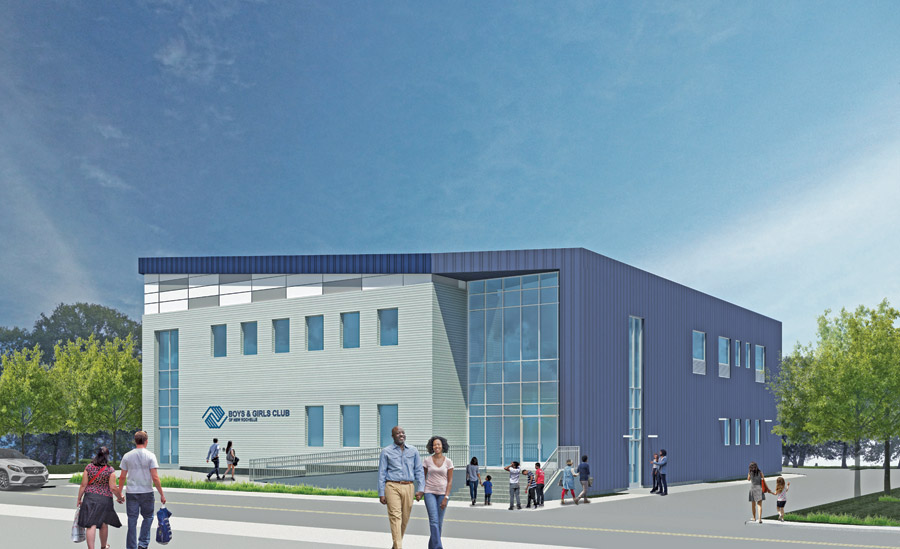 A well-appointed Boys & Girls Club building is the crown jewel of the “satellite city” being designed by GF55 in New Rochelle, N.Y.
Rendering by GF55 Architects

Its work in Harlem in the 2000s during the neighborhood’s renaissance brought GF55 more significant traction and industry visibility. By 2007, the firm was working on 10 different buildings in the neighborhood, some that went on to win architectural and industry awards, Real Estate Weekly reported at the time.
Looking back, Gross calls Harlem the “jumping off point” for the firm. GF55 continued to build upon its earlier work there during the 2010s, while also expanding its reach into the outer boroughs and in smaller suburbs in the New York metro area as development began to take off.

GF55 last year broke ground on one of its most ambitious projects yet, the downtown revitalization project in New Rochelle. Under Gross’ direction, the firm crafted the master plan for the multibuilding development next to Lincoln Park. 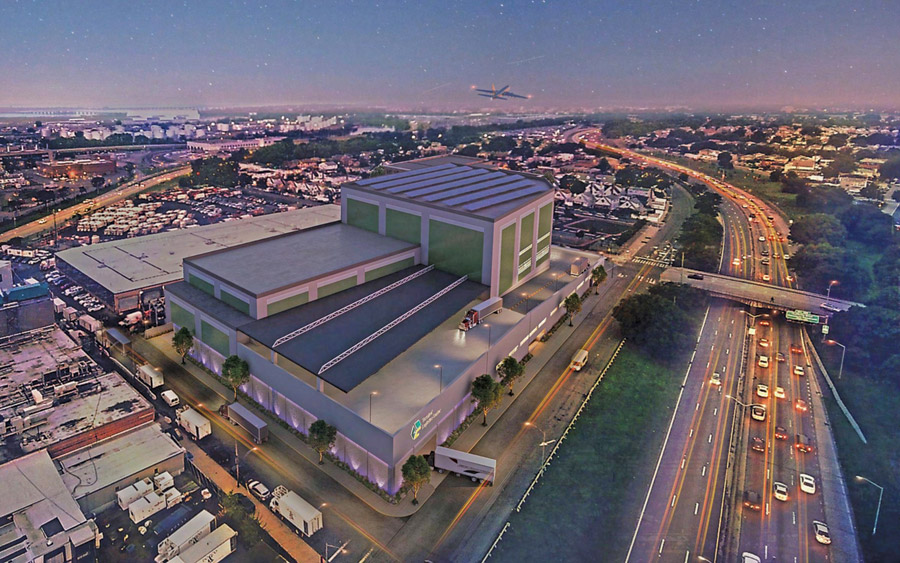 The “urban design scale” of the project marks a new chapter as well for GF55, Gross says. “It should be a nexus for growth in the downtown area.”

Jonathan Gertman, vice president of development at NRP Group, which is building the New Rochelle project, has high praise for GF55’s work. “They were fantastic,” he says. “They came to the table with a problem-solving approach and had a great design.”

Another major project designed by GF55, the $172-million J2, is taking shape in Jamaica. It is the latest in an array of affordable housing projects the firm has underway in the outer boroughs that include The Kira in Queens, 475 Bay in Staten Island and 980 Westchester in the Bronx.

The 500,000-sq-ft, 543-unit J2 apartment tower, which broke ground in late 2020, is the largest affordable housing project to be built in the heavily industrial Jamaica neighborhood. The 25-story residential tower marks the sixth building designed by GF55 to be built there, rising across the street from the Alvista Residential Tower and next door to the Hilton Garden Inn.

With its new steel, glass and stone tower, and its certification as an enterprise green community, J2 also exemplifies GF55’s broad approach to building affordable housing—with an emphasis on sustainability as well as inclusion of amenities and spaces that help connect residents and build community.

The list of amenities is long and varied, including lounges, children’s play area, yoga wellness room, office booths for remote work, music room, art studio and pet care facility. A barbecue grill station, dog run, outdoor play area and bocce court are slated for a second-floor terrace, while an artificial lawn and two sky lounges are planned for the roof, which has views of the Manhattan skyline.

The emphasis on community space is more important than ever after two years of social isolation during the pandemic and is part of the firm’s overall approach to building affordable housing, GF55’s partners say. The firm is focused on improving and enriching the experience of its tenants. 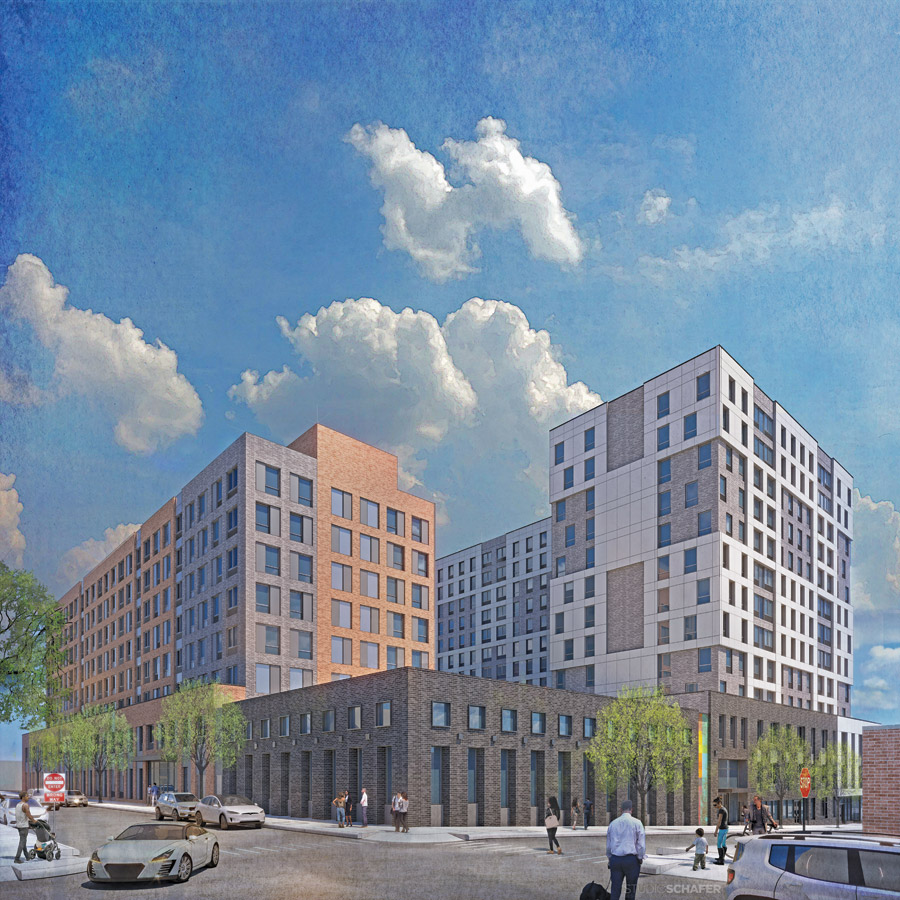 The vision for this mixed-use building is to bridge socio-economic separation in Mount Vernon, N.Y., say the architects at GF55.
Rendering by Studio Schafer

As with GF55’s other projects, there is a focus on sustainability as well, with the firm following guidelines to gain certification under the federal Enterprise Green Communities program for affordable housing. It sets standards for quality and sustainable living that include a “reduced carbon footprint, safe materials, energy efficient appliances and water conserving fixtures,” the firm states in a description of the project.

“I think it speaks to today’s affordable housing,” says Alster, who oversaw the work on J2. “It’s not just a building with apartments, it’s there to serve more than just the basic needs of housing.”

For GF55, another area of focus is to provide design services for health care and other support services. Work on the GF55-designed Richard Pruss Wellness Center in the Bronx wrapped up last year. Run by Samaritan Daytop, the 84,000-sq-ft health center was built to provide a behavioral services hub for 6,000 patients.

GF55 has also designed a series of charter schools, in some cases alongside affordable housing projects in the Bronx, Brooklyn, Queens and Westchester County. These include Zeta Macombs Charter School, Democracy Prep and Brooklyn Prospect Charter School.

Amenities designed by the firm go beyond health care and education. The 1921 Atlantic, a 14-story affordable housing mid-rise in Bedford-Stuyvesant, Brooklyn, will include an Oko Farms-run aquaponics educational farm. In Bushwick, Brooklyn, the seven story, 88-unit apartment building 8 Palmetto Street will also house a food market.

GF55 is also branching into one of the hottest new areas of commercial development: design of logistics and distribution centers. The firm is executive architect on the South Conduit Terminal Logistics Center, a new multilevel distribution center close to John F. Kennedy International Airport in Queens. The project is billed as the “first multistory air cargo/warehouse developed in the outer boroughs,” says a brochure.

GF55’s work is varied in other ways as well. While affordable housing projects have been the firm’s bread and butter, it also has a thriving business designing family compounds and private mansions. A recent project involves designing a 30,000-sq-ft family compound in Westchester County. 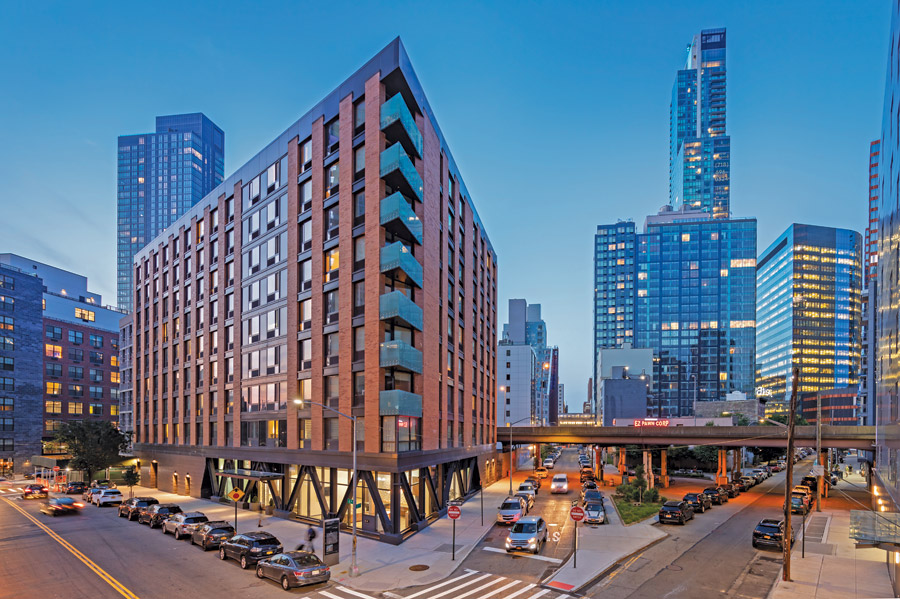 GF55’s broad portfolio has helped keep the firm in the black through challenging times over the past two years. Executives say they learned important lessons during the 2008 recession, when the company had to scramble and shift focus to stay above water.

GF55 more recently brought in a business consultant to analyze the management of projects as well as the firm’s finances, Alster says, adding: “I never learned business. I learned architecture.”

While many design firms saw revenue fall in 2021, GF55 says that its revenue last year grew slightly from the $6.07 million reported in 2020.

Meanwhile, GF55 is on track to post an even stronger 2022, with brisk business during the first four months of the year.

“We have [work on] a lot of buildings, and we are seeing a tremendous amount of inquiries about different sites in the city,” Gross says. “I think 2022 is going to be our best year ever.”

Boston to Spend $2B to Revamp, Rebuild Deteriorating Schools

Ontario Craft Strike Could Delay Hundreds of Projects Across Province