The bustling Phoenix suburb of Mesa has attracted a wide variety of new construction projects in the past couple of years, turning this former bedroom community into a booming employment mecca with dozens of big name firms moving to town. Much of the growth is due to the often behind-the-scenes planning and coordination of the Mesa Office of Economic Development (OED), which has worked strategically to align key elements that create an attractive environment for development.

Although not a traditional developer, the Mesa OED does what most municipal economic development organizations do: It works to stimulate business in the area; brings in new projects, companies and jobs; and targets diverse industries.

Last year the OED far surpassed even its own ambitious goals for new initiatives. The organization aimed to bring 32 new companies into the area and attracted 46; its capital investment goal was $400 million, it achieved $1.25 billion; and while the organization’s new business square footage goal was 400,000 sq ft, the actual amount produced was 3.7 million sq ft, according to the OED’s annual report. 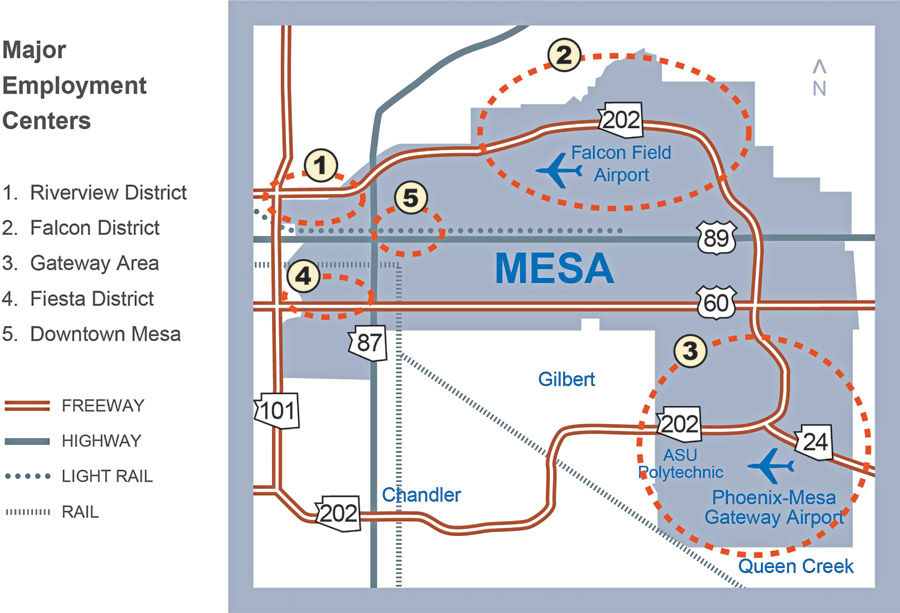 Clear design guidelines and a streamlined zoning process make for development-friendly conditions across the city’s key employment corridors.
Map courtesy of City of Mesa
*Click on the map for greater detail

“Mesa is a hotbed for development,” says Bill Jabjiniak, OED director. He says that ample power, water, natural gas, fiber-optic and market access, along with a talented and well-educated workforce, all have played a role in bringing new companies to the city. Mesa’s proximity to two airports—Phoenix Sky Harbor and Phoenix-Mesa Gateway—also make it easily accessible.

Jabjiniak credits Mesa’s development-friendly environment to the city’s founders, “whose foresight for infrastructure development has made the area extremely attractive today,” he says.

“Without [the infrastructure in place], companies can’t afford to build,” says Kevin Thompson, council member for District 6. “If they also have to put in millions of dollars of infrastructure, it makes it hard on them.”

“Mesa is a hotbed for development. Each of our employment corridors creates opportunity.”
— Bill Jabjiniak, Mesa OED Director

Mesa has established clear design guidelines to make the development process easier. “The city has been very proactive in trying to cut entitlement risk, and a zoning overlay creates a streamlined process. Instead of six months, we’re doing zoning approvals in six weeks,” Jabjiniak says.

“Instead of having to go through council to get approvals, the OED gave the planning and zoning services director the ability to give approval, shortening the timeframe. Time is money, so the longer it takes a company to go vertical, the more it’s costing them,” Thompson adds. “Prior to that, it was a soup du jour for what was approved, and developers were unsure of what that was. This [streamlining] gives the developers confidence to come to Mesa.”

“Every project coming in wants to be approved tomorrow,” adds Nana Appiah, Mesa development services director. “We are doing everything possible to meet timelines, and [this takes] good coordination between our development services department and [the OED]. We team up quickly to provide a response.”

In the three years Appiah has been in his current position (he was previously the city’s planning director), he has identified ways for the city to streamline meetings and restructure many processes, including, for example, moving the application intake from once a month to twice a month.

“The OED office is a phenomenal group. We could not do the things we’re doing as a city without them—they are the forward-facing marketing arm that brings these businesses to fruition,” Thompson says. 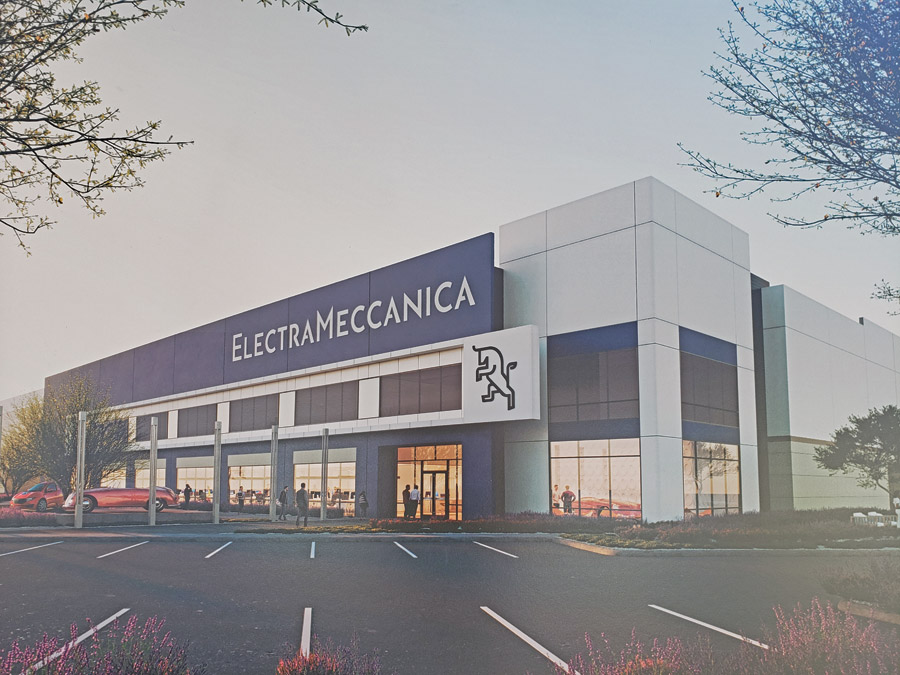 “Each of our employment corridors creates opportunity,” Jabjiniak says. For instance, the Elliot Road Technology Corridor, located in the northeastern portion of the Mesa Gateway area, is anchored by Google, Facebook and Apple’s $2-billion global command center. It also features more than 1,000 acres of shovel-ready sites located near a water treatment plant that’s being expanded, not coincidentally, just across from Apple’s campus.

“Gateway is probably the biggest story in Mesa,” notes Mayor John Giles. “We’ve been told this is the most successful example of adapting a closed military base in the country. It has been a rewarding, overnight sensation decades in the making.”

Giles served as a member of the Mesa City Council just after the Air Force handed the keys for its closed base to the city. “When we inherited the land from the Air Force 25 years ago, it was in the middle of nowhere, just cactus, rattlesnakes. Since then, we have extended a lot of city infrastructure—bringing roads, water treatment plants and massive electricity to those facilities. Our role is to accommodate the transportation and utility infrastructure. If we build it, they will come,” Giles says.

The addition of a rail spur will provide access for the area’s heavy industrial firms as well as supply-chain providers for the chip manufacturers.

Other high-profile corridor projects include a $70-million maintenance, repair and overhaul facility for Gulfstream Aerospace Corp. at the Phoenix-Mesa airport and ElectraMeccanica, a Canadian designer and manufacturer of environmentally efficient electric vehicles, which is building a $35-million assembly facility and engineering technical center that is expected to create up to 500 high-tech, high-wage jobs. 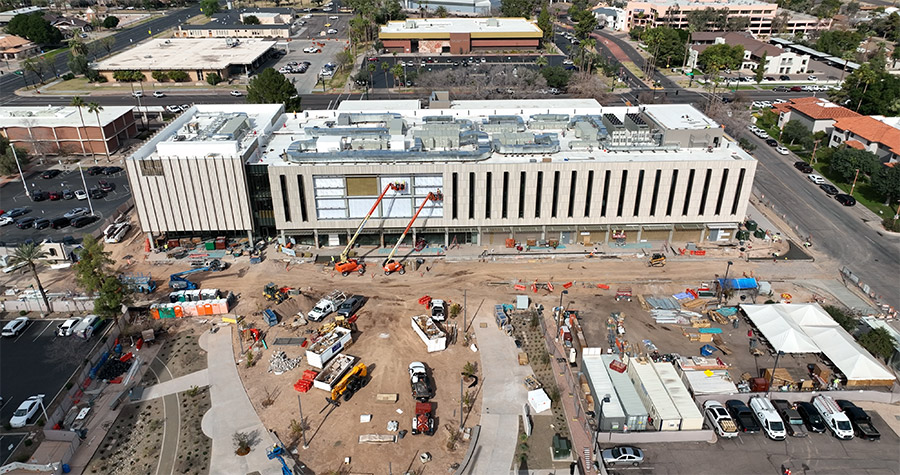 Downtown Mesa also is experiencing a transformation. With the introduction of light rail service within the last six years and redevelopment of its historic core, the area is being reimagined as a regional district for education, culture and innovation.

Arizona State University, in partnership with the city, is building the ASU @ Mesa City Center, a 118,000-sq-ft, state-of-the-art academic building seven miles from the school’s main campus in Tempe.

“This was absolutely one of the key puzzle pieces—innovation districts need to be anchored by an institution, corporate headquarters or research hospital—and we’re happy ASU is playing that role in our downtown,” Giles says.

“You’ll see more urban-style housing along the light rail corridor, and that will add to the vibrancy of downtown as well.”
—John Giles, Mesa Mayor

The ASU center will house programs offered by the Herberger Institute for Design and the Arts related to digital and sensory technology, experiential design, gaming, media arts, film production and entrepreneurial development and support. The city also is contributing $65 million to what will be the home of the Sidney Poitier New American Film School located next to the light rail station.

“Downtown Mesa still has a lot left to do,” Giles adds. “You’ll see more urban-style housing along the light rail corridor, and that will add to the vibrancy of downtown as well.”

Other new downtown projects include the Mesa Arts District Lofts, a 10-acre, four-story development that features 335 residential units and retail; ECO Mesa, with 102 apartment units and 4,000 sq ft of retail; and The Grove on Main, which includes 259 apartments and 42 townhomes.

In other parts of the city, Boeing’s 155,000-sq-ft fabrication center is nearly complete in the Falcon District, and the Banner Desert Medical Center Expansion offers 148,000 sq ft of new space and 102,000 sq ft of renovated space in the Fiesta District.

“Our forecast for the next couple of years is full steam ahead,” Jabjiniak says. “The west side of the city is positioned for redevelopment, while the east side is wide open, having never been developed before. The industrial market will keep growing and the office market will make a comeback—we’re already starting to see the signs of it coming back to life—and you will see more development opportunities coming along.”

“From Mayor Giles to the current council, they’re all in alignment and have a development services group that rises to the occasion,” says James Murphy, CEO of Willmeng Construction Inc., the contractor building ElectraMeccanica and several other Mesa projects.

“Between getting support for the right use of projects and committing to the speed of projects, Mesa has been a positive outlier for the better part of a decade,” Murphy says. “This mayor and city council alignment has resulted in achieving great things that have been manifesting over the past three years.”