Growth Curve for Southwest Contractor Fueled By a Diverse Portfolio

Over the past 30 years, Haydon Building Corp. has grown into one of the largest general contractors in the Southwest, doubling its revenue during a global pandemic. The Phoenix-based firm is one of only a few contractors in Arizona that provides turnkey solutions for commercial building, heavy civil, landscape and virtual construction services.

Haydon grew from about $150 million in revenue in 2017 to nearly $300 million in 2020, the result of a diverse portfolio that includes municipal, health care, education, parks and recreation, mission critical, industrial, heavy civil and water and wastewater projects.

Working for SDB Contracting, Gary Haydon founded its building division in 1991. The division became its own company in 1998 as Haydon Building Corp. when it also expanded to add a heavy civil division. In 2006, the contractor added Earthscapes, a full-service landscape subsidiary, to its lineup. 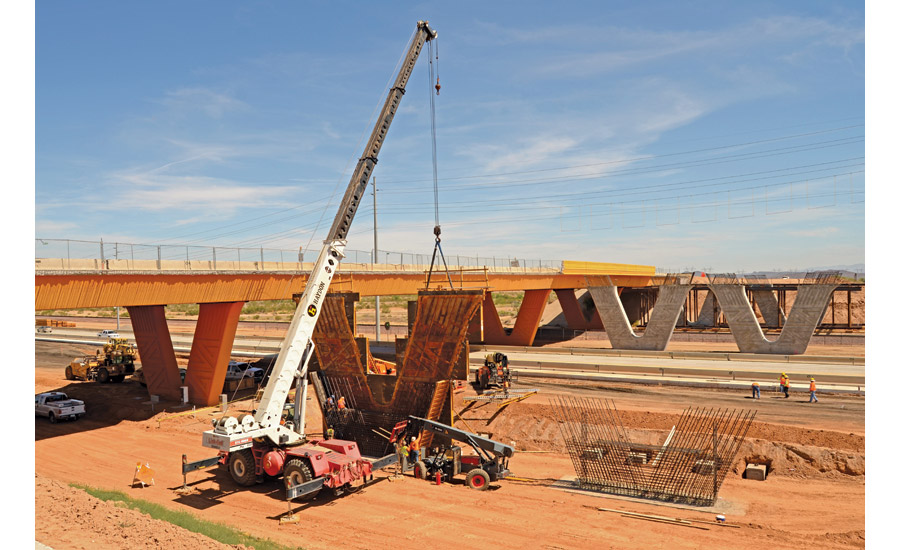 Key projects include the Kingman Regional Medical Center, the Northern Arizona University Aquatic and Tennis Complex and complicated bridge work for the Arizona and Texas departments of transportation.

The contractor was recently featured in AZBusiness Magazine as one of Arizona’s top 100 Places to Work in 2021 and was named No. 1 on Ranking Arizona’s list of heavy civil construction companies for the year.

“We’re focusing on being strategic, not building whatever comes along,” says Matt Carpenter, the firm’s COO. Haydon currently self-performs 75%-80% of the work in its heavy civil and water and wastewater division, and Carpenter, who started at Haydon as an intern 21 years ago, says the contractor’s growth is now focused on other types of work they can self-perform.

“The market in Arizona is going crazy,” says executive vice president Katie Haydon Perry, Gary Haydon’s daughter. “It’s a daily process of [determining] who we want to be, how we can get there and what type of work we want to execute. We’re experiencing ‘shiny object syndrome’ in the Phoenix area—there’s a project around every corner. But we are being a little more focused and acting strategically [because] as we grow, it is of the utmost importance to maintain our company culture.” 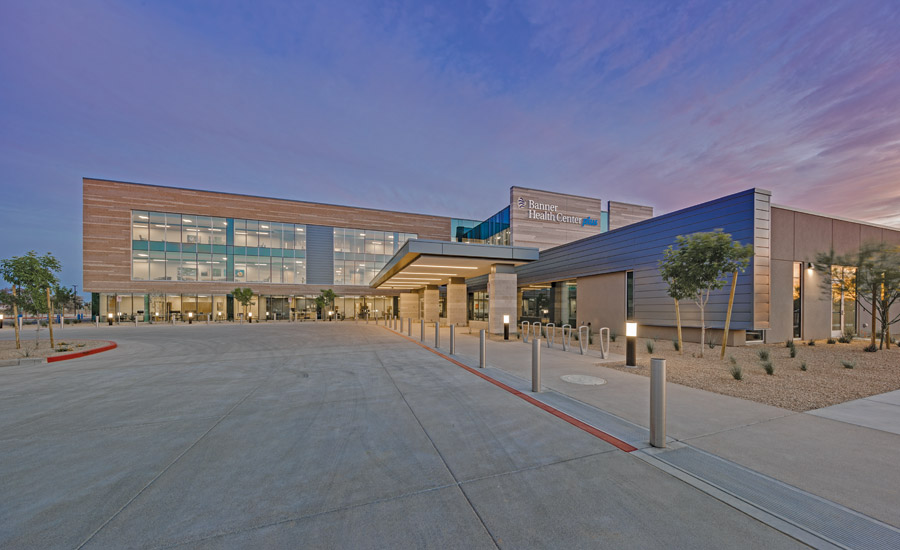 Perry is poised to take over leadership of the firm from her father and just completed year one of a five-year succession plan.

Haydon not only doubled in size over the past four years, but also kept its staff of more than 400 employed during the pandemic. Perry says the company’s growth is due to “a perfect storm: a team effort with long-term employees and long-term relationships.”

“Growing a construction company is really about organization and tenacity, and just staying with the grind.”
— Gary Haydon, Founder & President, Haydon Building Corp.

Municipalities paused their spending last year, and “this will be a challenge for us, so we’re branching into multifamily, more retail and relying on relationships to potentially drive our business,” she says.

“With lots of industry moving into the state, being as diverse as we are, we can take advantage of the infrastructure and water treatment work,” Carpenter adds. “Our thought process is to keep growing at a responsible rate so that our employees have the same opportunities here that we’ve had.” 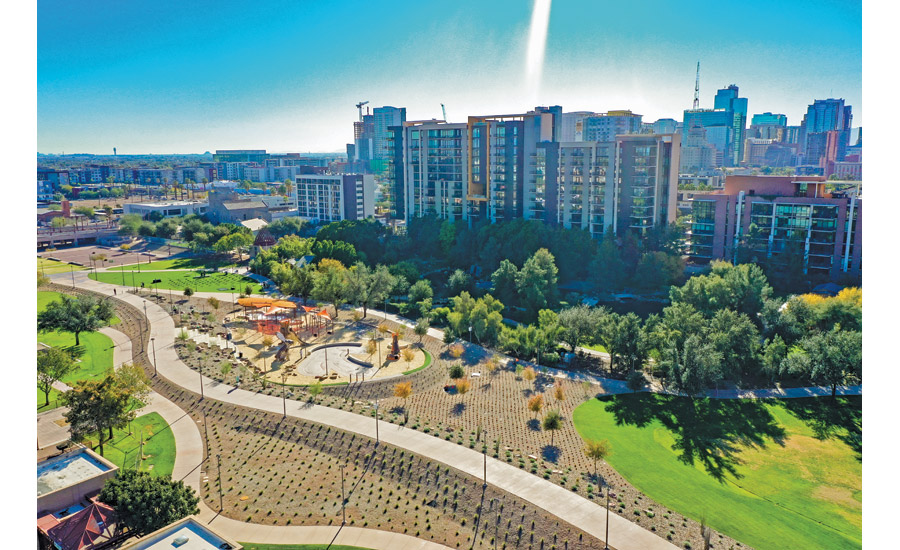 URBAN OASIS: The $100-million Hance Park Revitalization is transforming a 32-acre park built over the I-10 tunnel in downtown Phoenix.
Image courtesy of Haydon Building Corp.

As an only child raised by a single father, Perry says construction is in her blood. And while it is still “very much a man’s world,”  she says the value she brings to the team is looking at it from a business perspective instead of on the basis of its output.

Perry says Haydon spent the better part of 2017 with a small, focused internal team asking, “How do we take this company from a very tough, sometimes aggressive construction company to a place where people want to work and want to come to work?”

As a result, the contractor introduced Haydon 2.0—“putting the focus on being a people-oriented firm,” she says. Perry formed a team with directors and superintendents that meets monthly to work on their leadership skills and created a companywide behavior of the week, embracing continuous improvement while mentoring and coaching employees. Importantly, the company culture includes making a concerted effort to celebrate successes along the way, Perry says.

“Haydon has a unique ability to look beyond what the architect comes up with and offer outside-the-box thinking for our consideration in the early design phases,” says Joseph Salvatore, principal with Architekton, one of Haydon’s longtime clients.

“They have a tremendous preconstruction group that has a really good handle on construction costs, providing spot-on options for various components and systems. Their data is very reliable; you don’t end up with many surprises,” he says. “They do tremendous analyses for us so that we can fit early program information into a project model and cost model.”

Architekton and Haydon have built a number of public works projects together in Arizona over the past 15 years, including the Casa Grande Recreation Center, Copper Sky Regional Park in Maricopa, Tumbleweed Recreation Center in Chandler and an aquatic center for the Phoenix Country Day School.
“What makes them special is their overall attitude toward working with their clients. There is a mentality you have to have when dealing with public-sector clients—an understanding of the pressure that is put on those professionals. We try to understand what the drivers are and make sure their needs and concerns are always being taken care of,” he adds. 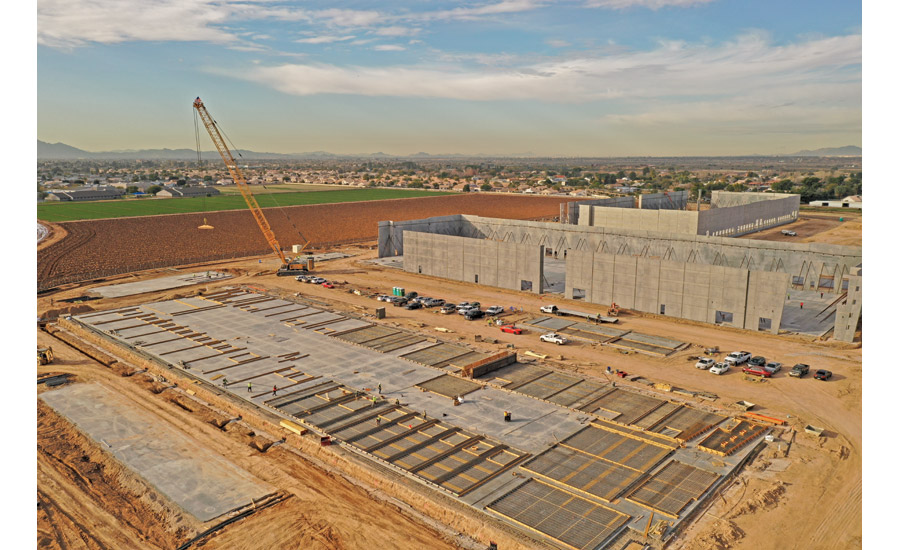 IN SYNC: Park Aldea, a 356,000-sq-ft Class A industrial complex in Phoenix, required careful sequencing to ensure all four buildings progressed at the same pace through various stages of construction.
Image Courtesy of Haydon Building Corp.

“The customer experience is very important to Haydon,” adds Robert Carmona, parks and recreation director for the town of Gilbert, Ariz. “They stay true to their values and beliefs and create a lot of trust with the contractor and project owner. When doing these park projects, the trust levels between our construction teams and town departments are vital, and Haydon takes a lot of pride in creating that accountability and trust.”

Haydon also stays connected, giving back by working on special events and supporting nonprofits in the communities where they build. The contractor contributes more than $200,000 to charitable causes annually.

As Gary Haydon transitions the leadership of the firm to Perry and Carpenter, he’s keenly focused on mentoring the next generation at Haydon. He says a key lesson he tries to impart is that “it’s rarely an anomaly that gets us in trouble; it’s when you stray from the fundamentals.”

“Growing a construction company is really about organization and tenacity, and just staying with the grind,” he says.

“My intentions are absolutely pure,” says Perry. “This is my dad’s business. He is tough and sarcastic and funny, and he’s the hardest worker I’ve ever met. Every decision I make is about what is the best choice for the business.”

Checking For Signs of Slowdown in a Growth Market