This website requires certain cookies to work and uses other cookies to help you have the best experience. By visiting this website, certain cookies have already been set, which you may delete and block. By closing this message or continuing to use our site, you agree to the use of cookies. Visit our updated privacy and cookie policy to learn more.
Home » Grids Push To Link More Renewable Projects as Backlog Soars
SustainabilityPower & IndustrialGovernmentProject deliveryRisk
Clean Energy Construction

Transitioning the U.S. power grid to incorporate renewable energy has been complicated by a myriad of issues that transmission system operators are struggling to work through—particularly reviewing feasibility of a massive number of proposed solar and other small projects using processes developed for large fossil fuel power facilities.

Grid infrastructure also must be expanded to handle the changes, with annual projections of needed investment ranging from $3 billion to $5 billion through 2030.

Major U.S. system PJM Interconnection, which operates in all or parts of 13 eastern and Midwest states and Washington, D.C., to serve 65 million people, has seen an unprecedented influx of requests for grid connections, tripling in three years. There now are 250 GW in the queue.

“More than 95% are renewable projects that are smaller and in trickier places,” says Glen Thomas, president of GT Power Group and a former Pennsylvania utility commission official PJM analyzes each new generation request.

“Analysis of a 5-MW solar project is tougher than for a traditional 250-MW or larger natural gas plant,” he says. Many awaiting approval have been pushed farther back in line, and may never be built. “It’s complicated and PJM is working its way through,” he adds.

PJM last month proposed a new interconnection process to eliminate the backlog by clustering projects by area and changing the “first in, first out” process to “first ready, first out,” which enables those with financing, customers and construction plans to move to the front.

PJM’s traditional approval process takes 26 months on average, but the project influx caused consistent delays, PJM spokesman Jeffrey Shields told ENR. Projects needing transmission upgrades of $5 million or less are set for fast-tracked analysis in 15 to 18 months. Others will take about two years from proposal to approval. PJM’s plan “would better prioritize projects most ready for construction,” he says. 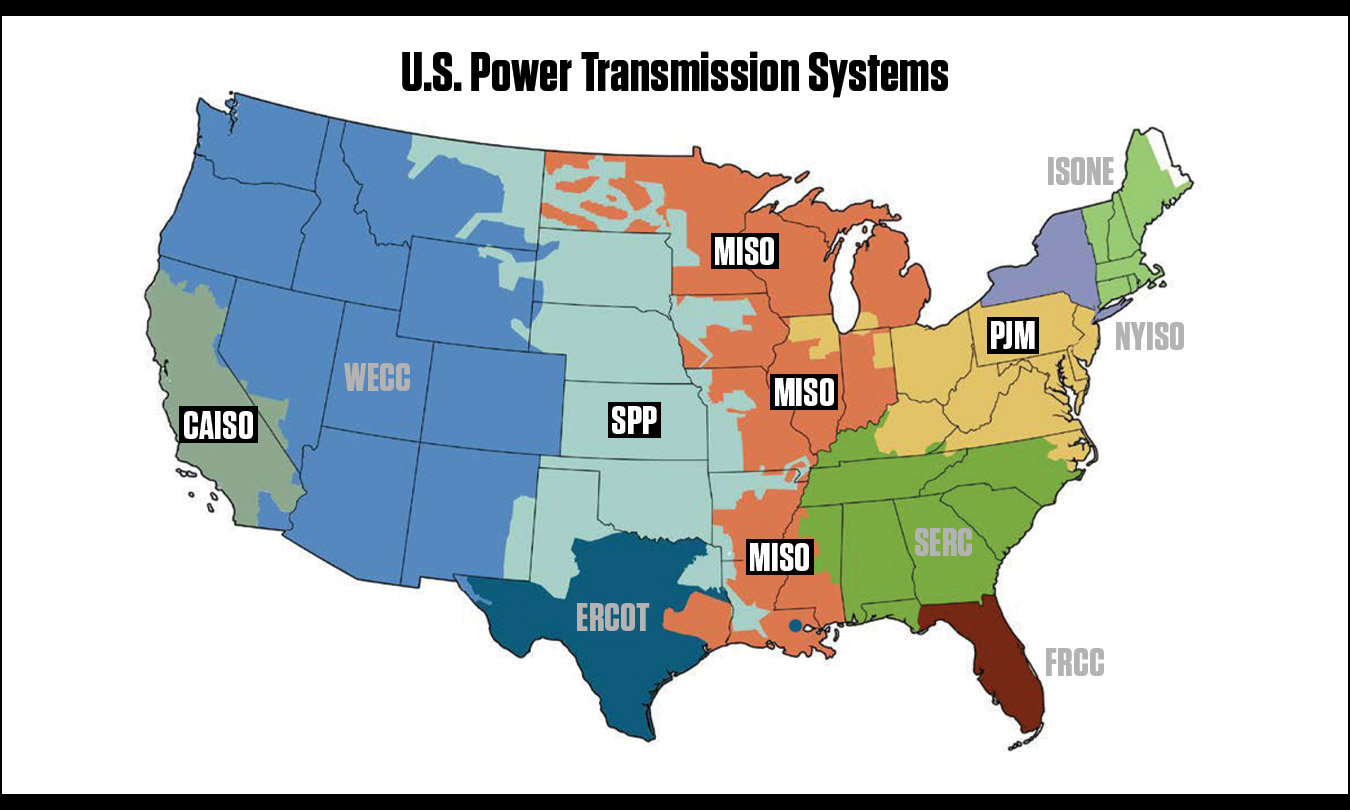 The PJM, MISO, SPP and CAISO grids have taken new steps to forecast project needs and to triage and expedite reviews.
Map: National Renewable Energy Laboratory, US Energy Dept.
*Click on the map for greater detail

About 1,250 projects, totaling about 100 GW, now are pushed forward and 450 are being fast tracked. This leaves about 1,250 other projects not as priorities during a two-year transition set to begin Oct. 1. Fuel type is not a consideration.

One key PJM committee on Feb. 8 approved the plan with 91% of members in favor.  All other approval of its 275 utility, developer, state officials and other stakeholders is expected by late April before the process changes go to the Federal Energy Regulatory Commission.

“These changes are critical for PJM to help states achieve their decarbonization goals,” Shields says, adding that it is working on a multiyear study of transmission changes from the evolving power mix but has not yet determined new capacity needed to complete the energy transition.

CAISO, which serves 80% of California and part of Nevada, foresees new generation need over the next 10 years growing from about 1,000 MW to 4,000 MW a year. The Jan. 31 draft plan is “a material step forward in meeting the emerging challenges facing the grid,”  the operator says.

The projects will help eliminate issues that now restrict interconnection of new generation, particularly low-cost resources that provide economic benefits to both regions, the two grid operators said. The projects could enable about 28.3 GW of new generation to be developed in MISO and 53.5 GW in SPP. The next step is to develop a cost allocation method so construction can begin on the projects, SPP and MISO say..

Like PJM, the two operators are coordinating to streamline the interconnection process between their two grids and have agreed to change approvals of projects in the queue to a first-ready, first-built priority instead of the first-come, first-serve approach.