The hard work of hanging, taping and finishing drywall remains one of the more physically demanding tasks in building construction. While other trades in the industry have seen tools and equipment take the strain out of work, drywall work remains largely unchanged. And contractors are well aware of this.

“We’re a self-performing contractor, very close to the work, very hands-on,” says Todd Mercer, vice president of strategic innovation at Webcor. “And if you’re looking at the areas we self-perform in, drywall is one that hasn’t changed in 30, 40, maybe 50 years.”

Drywall installation and finishing is a specialty trade that needs  skilled craftworkers to get it right. But a fair amount of that work is just repetitious finishing and sanding. That’s where the Canvas robot rolls in. Able to semi-autonomously finish large sections of drywall, the robot is changing the way some drywall teams perform their work.

“The robot focuses on broad spaces, high-volume sections, as well as hard to reach areas like high spaces and corners,” explains Kevin Albert, CEO and co-founder of Canvas. “The machine can handle the application of the finishing compound and the sanding of it. Workers do the taping and handle the more complex geometries.” A telescoping mast lets the robot arm work at heights of up to 17 ft. Canvas aims to have the robot perform a Level 5 finish on the drywall, the highest rating on the Gypsum Association’s scale, which calls for a thin skim coat of finishing compound across the drywall surface for a uniform appearance.

While human workers come around and do the final touch-ups on the Canvas robot’s work afterward, the quality of work has exceeded expectations, according to Mercer. “This has increased our ability to deliver faster and more reliably,” he says. Webcor has worked with Canvas for two years and has used the robot on several high-profile projects with large continuous drywall installations, including the boarding area of the new Terminal B at San Francisco International Airport. “We can deliver at a higher level of quality now at the same cost, and as the product continues to evolve, the narrative may soon be the same quality at less cost.”

Unlike some other construction robots that require pre-loaded plans or programming knowledge to set up and get running, the Canvas robot is designed to get to work with minimal preparation. The robot, also known as the Canvas Finishing System, uses onboard visual sensors to identify the work area, and then performs tasks assigned by the operator. “The robot uses its vision system and laser-scanning system to understand the geometry of building, and the worker on the tablet can understand the workflow of the machine: where to spray, where to not, set the thickness,” says Albert. “It’s how we enable it to be incredibly flexible.”

There is no need to load BIM or other project models or files ahead of time—a deliberate choice, says Albert. “We want the machines we make to fit right in with the way subcontractors work. It’s specifically designed to be a tool that works in collaboration with the manual work getting done.” The robot does require onsite power, but Albert says that Canvas is looking into developing a battery-powered version for jobsites where that is not an option.

The Canvas robot has been working in the field on real projects for a few years now, and the start-up firm came out of stealth mode in early 2021, soon securing a $24-million Series B funding round. But up until the end of 2021, the company was running the robot with its own employees, in many cases working directly as a drywall subcontractor on the projects on which it was deployed.

But that’s changed with Canvas’ new Innovation Partner Program. It is now training up employees at select contractors to use it themselves. Now half a dozen major drywall and self-performing contractors are training their staff to run the robot, and thinking about how it could change the way they organize their  crews. Initial partners include Webcor, DPR Construction and Swinerton.

“We see this as potentially revolutionizing the way we work,” says Jonathan Hughes, a third-generation self-described “drywall guy” and the vice president of sales and estimating at Daley’s Drywall & Taping, based in Campbell, Calif., another Canvas partner. With about 900 employees, the Bay Area drywall contractor sees plenty of work on Silicon Valley tech campuses with exacting demands. His crews are beginning to train on running the Canvas robot themselves, and Hughes has already seen it in action.

“Just using it over a couple of days I could see how we could quickly integrate it into our workflow,” he says. The machine also seemed relatively easy to use, which Hughes believes could aid broader adoption. Loading the finishing compound is not too different from a typical spray rig, and setting up the robot from the tablet is not too challenging. Even skeptical members of his team were impressed. “We visited the Canvas offices and one of my taping foremen was a bit dubious of it, but by the end of the day he was like ‘when can I get one,”’ he recalls.

Robots and automation often come with concerns of replacing workers or eliminating jobs, but for Hughes it’s a very simple calculus about repetitive injuries. “You talk about replacing a human, but there is the safety issue to consider,” he says. “We see a hopeful aspect for us in this to reduce injuries—all that sanding and repetitive motion adds up.”

Worker shortages have been a persistent issue in construction in recent years, particularly in skilled trades such as interior finishes. But the addition of a robot is if anything a force multiplier, says Mercer. “Drywall taping is not the most popular trade out there; it’s hard on the joints and soft tissue. But with this tool we don’t have to expand our workforce to enhance productivity.”

And while Webcor brainstorms what a drywall crew will be like when a single operator can run several robots on a site at once, Mercer is looking beyond that toward how it addresses the broader recruitment problem. “The trade is evolving, and this allows us to attract a different type of worker into the trade, hopefully.” 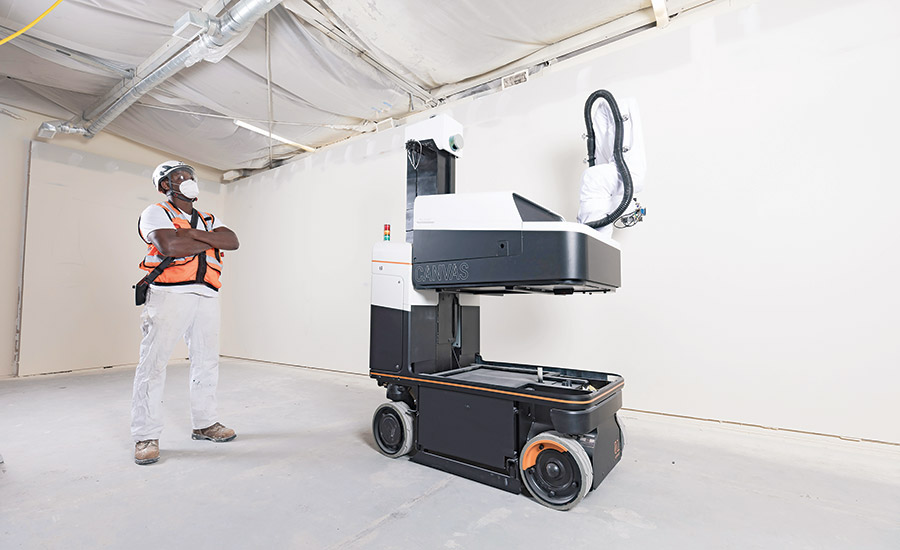 With the more repetitious work left to the robot, workers can better avoid fatigue and injury.
Photo courtesy of Canvas

With the work ideally no longer as physically punishing as it was in the past, Mercer is hopeful that a younger generation will take a closer look at jobs in the building trades like drywall installation. “There’s a shift in the craft toward ‘how do I apply this tool more efficiently to expand what I can do while operating it’ versus ‘how do I finish this one area consistently by myself.’ It’s not just about that hard physical grind; you get to use your head.”

Both Daley’s Drywall and Webcor are union contractors, and Canvas itself has been eager to directly engage with building trades unions in the development of the robot. The labor response to the start-up has been more positive than it initially expected. “We engaged with the painters and finishers union early on, before even customers,” says Albert. “And we found highly aligned interests.” During their work as a subcontractor on pilot projects across the Bay Area, Canvas employees even went so far as to become members of District Council 16 of the International Union of Painters & Allied Trades. “For the union, they have seen this sort of shift before, like when everyone went from paintbrushes to rollers. It’s just another progression in the adoption of new tools.”

“We’re a union contractor, and as this [robot] has been introduced to the unions, I’m surprised at how well it has been received,” says Mercer. “They’ve embraced it right off the bat, since they’re seeing the same recruiting challenges as we all are.”

Many get the sense that the drywall industry is overdue for some change. “People are realizing that just because it’s the way we’ve done things for 40 years doesn’t necessarily mean it’s the right way to do it anymore,” says Hughes. “We talk to a lot of non-competing drywall companies across the country, and they are already asking us about the [Canvas robot]. Everyone is keeping an eye on it to see how it does.”

“I think it’s all tied together,” says Albert. “Tools and machines like this can alleviate the labor shortage, extend people’s careers, reduce injuries.” And he sees plenty of similar examples across construction. “No one would question whether the excavator was a big improvement over the shovel. We’re just going from a trowel to a machine.”