How Surveyors Make the Most of Google Earth

Easy access to geographic information a plus for project planning.

Although most people start exploring Google Earth by searching for a famous landmark or their home address, many surveyors realize the extensive online database is a valuable tool for visualizing the layout and terrain of any area of interest. With global coverage combining satellite, aerial, 3D, and Street View images, Google Earth provides access to a wealth of knowledge without leaving the office.

Zoom Around the World

Google Earth is based on technology originally created for gaming and further developed as Keyhole EarthViewer by KeyHole, Inc. Since its purchase by Google in 2004, the Google Earth program continues to evolve and offer a range of high and low-resolution imagery, digital elevation models, 3D building models and other tools.

The ability to conduct virtual site visits is a major time-saving advantage of Google Earth and has helped it become an integral part of the surveying business. A surveyor can look at the area of interest in satellite images and aerial photos, augment the view with GIS information, and prepare a cost estimate and survey plan based on the most current information available.

Google Earth’s range of capabilities include zooming through multi-resolution imagery, measuring linear distance and area, overlaying section lines and boundaries, and geo-tagging photos. In addition, all information pertinent to a project can be stored in My Places and shared with clients.

“I keep Google Earth open on my computer all day,” says Chris Ambourn, Senior Land Surveyor, Stantec. “Instead of having to travel to each site, I find the location in Google Earth. This allows me to identify access points, survey marks, obstacles and vegetation coverage that influence my cost estimate, and helps me schedule the necessary people and equipment.”

Developing a visualization of the area to be surveyed is valuable to the survey team assigned to the project, and to the client as well.

“I create a ‘survey limits’ sketch that clearly defines what we’re going to include so there are no misunderstandings,” Ambourn continues. “In Google Earth I draw a polyline around the area, add a title and notes and create a pdf to insert into every proposal.”

Planning a survey starts with gathering existing geographic information about the area of interest. Most data are made available by federal, state and municipal agencies; however, the process of finding and incorporating this from multiple sources is time consuming, even if available online.

“Assembling information about control monuments, survey routes, and boundary information was extremely time consuming before records were digitized,” says Dr. Tom Davis, CTO, Earth Survey. “Early on we had to visit each site in person, pull deeds at the clerk’s office, make hard copies – everything was manual. After public data became available online, we were looking for a more efficient way to bring the geographic data together with the satellite and aerial photos.”

To address this problem, Earth Survey developed a set of geodetic tools that runs in Google Earth. Earth Survey’s free tools provide a graphical interface for queries to frequently used government websites, such as the Bureau of Land Management (BLM) for PLSS divisions, the Environmental Protection Agency (EPA) for hydrography overlays, and the National Geodetic Survey (NGS) for survey markers. The tools are displayed in the Places panel of the Google Earth sidebar 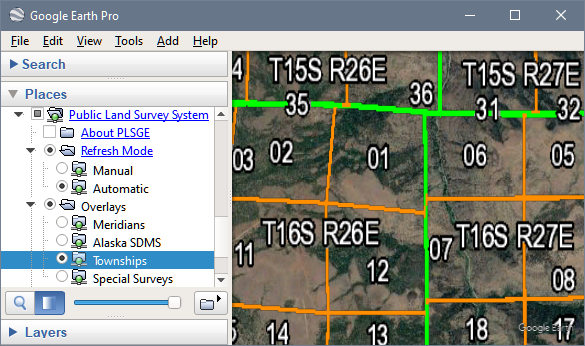 “Earth Survey is a front end for public data sources, such as BLM, NGS and EPA,” explains Davis. “For example, the NGSCS web application acts as an interface with the NGS station list server. It submits requests to the server and translates the textual information into KML so it can be displayed graphically in Google Earth.”

Visualizing survey data is made even more convenient with KML export features found in popular survey software. Providers, such as Trimble, Hexagon and Carlson Survey, accommodate the transfer of geographic data from their programs into Google Earth to be overlaid on imagery. In addition, the built-in functionality, such as measuring, content creation, and GPS support make it possible for surveyors to be productive in Google Earth without any additional programming.

“It is my impression that Google Earth has been roundly and enthusiastically accepted by land surveyors,” Davis says. “I’d like to see Google Earth expand into more serious cartographic and GIS applications; however, it does make a valuable contribution in its current form.”

This article was originally posted on www.pobonline.com.

Oracle's P6 R8 – A Successful Operation, but Let's Make the Software Model How We Want to Do the Work