Baltimore, Philadelphia districts prepared space at nearby facilities for thousands with tight deadline

The girl, just four years old, had been traveling and waiting in lines for hours, if not days, by the time she stepped off the bus at a Camden, N.J., temporary facility to rest.  She was tired and hungry and, as Capt. Dan Powell of the U.S. Army Corps of Engineers puts it, “she was bawling her face off.”

The child was one of the thousands of Afghan evacuees arriving in the U.S. on Aug. 31 after the U.S. departed Afghanistan. After landing at Philadelphia International Airport, she was brought to the processing facility the Corps had set up for them to rest and eat while waiting to make the final leg of their journey to new homes as part of Operation Allies Welcome—the stateside continuation of the operation to evacuate U.S. allies from the now Taliban-run country as the U.S. military was withdrawing.

The Camden facility included three warehouses converted into a space for those who had supported U.S. efforts in Afghanistan over the past 20 years, along with their families, to stop over on their journeys. Military personnel and contractors transformed the space from cold storage into a place where people could be comfortable for a few hours, with thousands of cots plus enough blankets and pillows from the Red Cross for everyone to have their own.

Also provided were hundreds of phone-charging ports, portable restrooms and showers, prayer rooms and even a children’s play area, says Powell, who is assigned to the Corps Philadelphia district and led onsite support at the Camden site.

“By the time [the child] left, she was giggling and happy, kicking a little ball around, and having a good time—back to where a normal four-year-old should be,” Powell says.

About 70,000 Afghans have arrived in the U.S. as part of Operation Allies Welcome, according to the U.S. Dept. of Homeland Security. Officials say the majority of the evacuees worked with the U.S. directly in Afghanistan in military, diplomatic or developmental efforts, or are family members. Many worked as journalists, human rights activists or humanitarian workers.

As part of the operation, the Philadelphia and Baltimore Corps districts assessed and established facilities near two airports for the U.S. State Dept. to perform screening, processing and onward movement of evacuees. As the Army’s real estate wing, the Corps has plenty of engineering, contract management and facilities experience, particularly under deadline pressure, as it demonstrated last year in fast-track facility mobilization because of COVID-19.

But what made this mission different was the tight time frame, the cross-federal agency teamwork and the desire to help people who had helped U.S. armed forces and others for two decades.

“We do facilities-type stuff in normal operations, but normally we’re managing a services contract or managing a personnel contract for contractors at a site,” Powell says. “Having this direct level of presence and effort was brand new, and we were all kind of making it up on the spot.”

The first flight of about 220 evacuees landed at Washington Dulles International Airport in northern Virginia on July 30. But as the U.S. military’s Afghan withdrawal date at the end of August approached, the number arriving there grew to thousands each day. With a growing bottleneck at the airport in August, it fell on the Corps to find another location for evacuees to be processed by State Dept. officials and wait for transportation to homes in the U.S.—which in many cases would be temporary housing on military bases across the country.

Near the airport, the Corps leased the Dulles Expo Center in Chantilly, Va., along with two other spaces, totaling more than 240,000 sq ft. The lease for the Expo Center was signed just hours before the first guests arrived, says Col. Estee Pinchasin, Baltimore district commander. The district covers six states and Washington, D.C. The expo center is designed for hosting large numbers of people, so it did not require as much work as other facilities. The Corps brought in portable toilets and mobile shower units, and used hanging pipe and drapes to create different areas for medical screenings, play spaces, cafeteria, phone-charging and prayer, plus separate sections for families, single men and single women. 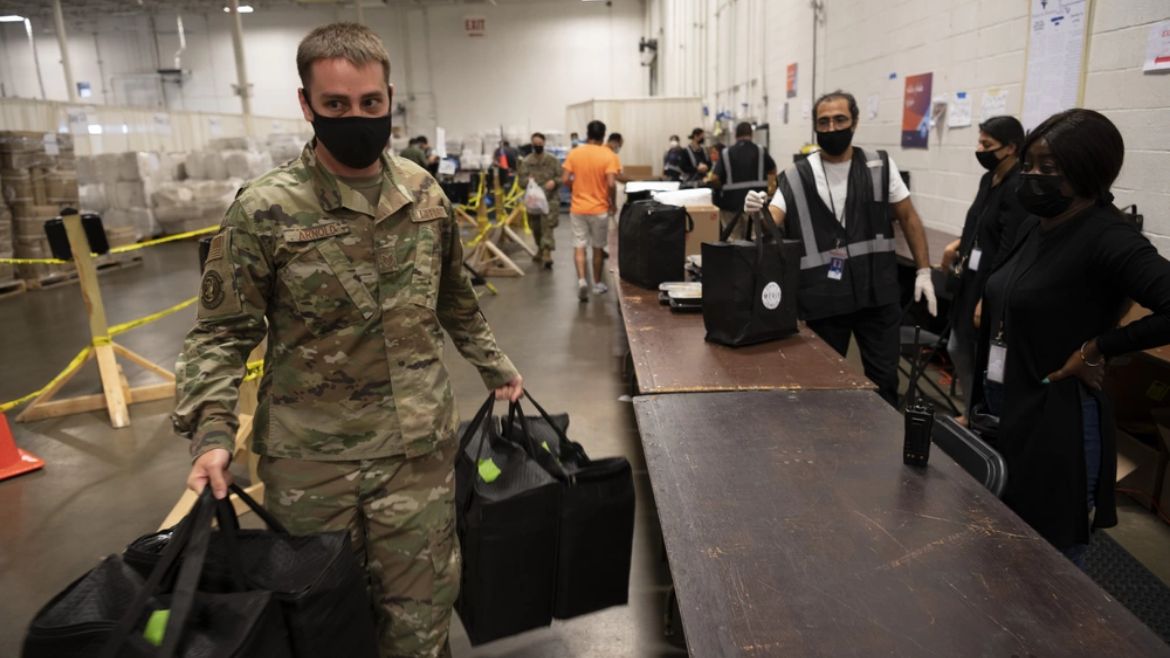 For Pinchasin, Operation Allies Welcome came just weeks after she assumed district command on July 16. She holds three master’s degrees, including one in civil engineering from Stanford University, and is the district’s first woman commander—now overseeing more than $1.5 billion in engineering, construction and other related work annually. Earlier in her career, Pinchasin deployed to Afghanistan as Corps officer-in-charge for the Kandahar Area Office and says she worked “with quite a few” locals during her time there.

“It was overwhelming to see the first group of people come into that facility 12 hours after that lease was signed, and for them to be thanking us for what we were doing, while most of us felt like we wanted to thank them for their support all these years,” she says.

Pinchasin was surprised by the reactions of Afghans arriving at Dulles. Children were running up to the soldiers, hugging and high-fiving them. Interpreters had T-shirts and patches they had kept from American military units they had served with, saying they were ready to serve again, she adds.

Some interpreters found chances to help during transit. When officials at the expo center had to work with someone who did not speak English, they communicated on the loudspeaker the need for an interpreter and several multilingual Afghans would run over to assist, says Pinchasin. 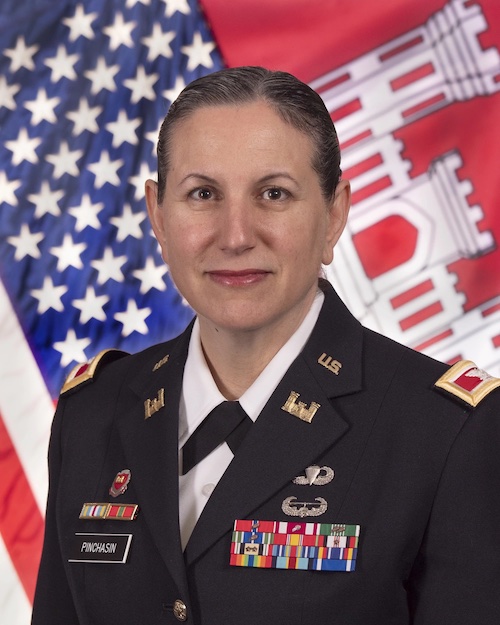 The Corps continued to improve its leased facilities as the mission continued to meet its needs. The children’s play area was continually upgraded, and the men's area was enlarged to accommodate the larger number of single men. By the end of the Expo Center lease, about 46,000 evacuees had passed through. But as the number of evacuees coming through reached 7,000 per day in late August, the federal team running the operation added Philadelphia International Airport as a second arrival location.

The Baltimore and Philadelphia district real estate teams joined to establish facilities similar to the Dulles Expo Center near the new airport. Ryan Parks, lead Corps project manager for the Philadelphia district, says the team looked at about 14 sites and did assessments at four before settling on the trio of warehouses near the waterfront in Camden, across the Delaware River.

“It was a matter of days and hours before we had to get the facility operational to be able to accept guests,” he says.

Despite the short timeline, the Corps’ real estate and contracting specialists secured a lease for the 190,000-sq-ft space and the team installed over 1 mile of fencing, carpeted 150,000 sq ft, added 20 floor HVAC units and about a dozen generators to power them, brought in more than 100 portable toilets, installed 600 linear ft of curtain walls to divide spaces and one-quarter-mile of cordoning rope for lines.

It took just 96 hours to get it all done.

“I showed up on Wednesday,” says Powell, who led onsite support. “By Sunday, we had 90% of that installed, running and able to receive guests the next day.”

Between Aug. 31 and Oct. 27, when the last guest left the Camden facility, more than 19,000 evacuees had been there, with most spending between eight and 12 hours before traveling onward.

The tight time frame was not the only challenge for the operation, which ramped up just ahead of the end of the federal government’s fiscal year on Sept. 30, a busy time when Corps districts are pressing to get contracts awarded, Parks says. There also was the matter of dealing with large groups of people traveling internationally during a global pandemic.

“In all of this, you have a crisis in a crisis, where you have COVID,” Pinchasin says. “And now you have COVID-positive people. Life doesn’t stop just because you’re evacuating a country. You have people giving birth, people getting sick, people that might be medically fragile. So we ended up establishing some facilities for them, as well.”

The Corps used emergency lodging contracts to secure hotel space for evacuees who needed medical attention and for families so they could remain together. Maintaining family integrity was a top priority, she says.

Pinchasin credits Operation Allies Welcome's success to coordination across the federal agencies working on it, with leaders from Homeland Security, State, military branches and other involved groups primarily coordinating on the ground, in person through regular touchpoint meetings. Pinchasin emphasizes the Corps efforts by subject matter experts, resource managers, real estate and contracting specialists, as well as agency mechanical, electrical and civil engineers, fire safety officers and others.

“They served as the foundation from which the federal team was able to launch into the mission in the Dulles area,” she says.

While the Dulles and Camden sites now have closed, Operation Allies Welcome is still underway.

More evacuees have continued to arrive, although at a much slower pace. Pinchasin says she has provided letters of reference for some people she worked with in Afghanistan who are still trying to get out of the country.

As of Nov. 17, about 25,000 Afghan evacuees had been resettled into communities across the U.S., but about 45,000 remain at the military installations. The federal government is collaborating with more than 200 organizations to assist in resettlement as the Afghans apply for immigration status.

Joint Base McGuire-Dix-Lakehurst, about 46 miles northeast of Philadelphia airport in central New Jersey and the military's only facility shared between all three service branches, now houses the largest contingent of evacuees—an estimated 11,000—in a community called Liberty Village whose residents live in barracks or large reinforced tents.

At a House Border Security, Facilitation and Operations/Oversight, Management and Accountability subcommittee hearing on Operation Allies Welcome held on Oct. 21, Chairman Rep. Lou Correa said the government’s obligation to the evacuees will include ongoing support for housing, employment and other needs as they settle into their new communities.

“We know that this transition will not be easy,” he said. “To leave one’s home and settle in a new country is a difficult undertaking no matter what the reasons are. Unfortunately, many of our Afghan allies have faced hardship long before arriving in the United States.”