After all, Gehry had designed the billowing Walt Disney Concert Hall across the street, its steel curves suggesting a clipper ship in full sail. The Grand’s design with its whimsical towers that resemble stacks of children’s building blocks is a response to that 2003 landmark.

“We knew they were going to present a building idea you can’t build with conventional techniques,” says Rick Vogel, senior vice president at Related Cos., The Grand’s developer and contractor. “We found ways to do so on a conventional schedule.”

With 305 hotel rooms, 436 residential units and more than 176,000 sq ft of retail space, The Grand will be the centerpiece of a wider 3-million-sq-ft, mixed-use project. The project lingered on the drawing board and in construction documents for more than a decade before it broke ground in 2019. The hotel and residences are set to open in spring 2022 and the retail portion in the fall. 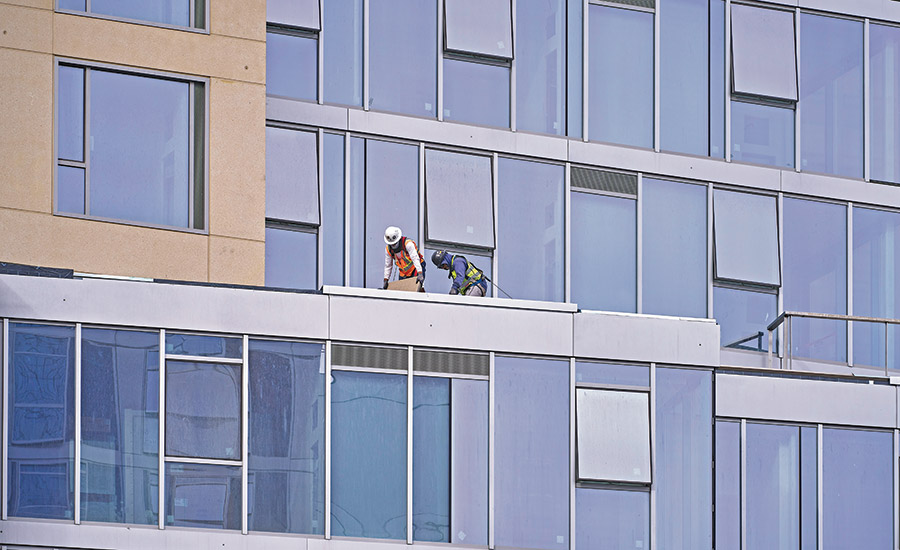 Making The Grand’s demanding design a reality required close collaboration between Gehry Partners LLP and the Related-led construction team. Its “building block” towers required careful planning so engineering systems could travel from floor to floor. The hotel tower’s silvery exterior needed to complement the concert hall’s stainless-steel panels without the cost, and the 2020 pandemic threatened to add months to the project.

The Grand was originally slated to be the first construction piece of the area’s mixed-use development zone. All of its building documents were ready to go on Jan. 1, 2008, says Barry Widen, Related vice president of design and construction. The global financial crisis put those plans on ice, so instead Widen’s team built neighboring Grand Park and a 270-unit mixed-income residential building. Planning for The Grand resumed in 2016 with new equity financing and government approvals.

“We started all over again with the schematic design,” Vogel says. Designers rearranged the building complex’s various elements, reduced the number of hotel rooms and residential units, and trimmed the retail space. The revamped design drawings were finished in 2019, six months after construction began.
Building Blocks

“The goal that Frank [Gehry] had was that they stacked on each other like children’s blocks, and he didn’t want the transition floors to be noticed from the outside.”
—Barry Widen, Vice President of Design and Construction, Related Cos.

The two towers’ vertically stacked “blocks” presented obvious construction challenges, Widen says. “As you go up the building, each floor is offset from the floor below, and they’re rotated. The goal that Frank [Gehry] had was that they stacked on each other like children’s blocks, and he didn’t want the transition floors to be noticed from the outside.”

Traditionally, moving from a wider floor plate to a smaller plate requires a separate space to accommodate the engineering systems continuing vertically through the building, Vogel says. Instead, The Grand’s transitional spaces were arranged within the building’s envelope and hidden from view. The offset blocks also create outside terraces for some hotel rooms.

To ease the transitions between floors, the Gehry design team reduced the number of rotated blocks, says Tensho Takemori of Gehry Partners. Instead of offsetting the blocks by 10 ft, the designers made do with 2-ft offsets, which were easier to build going from level to level.

The project team also collaborated on materials, including the hotel’s metal panels. The architects drew inspiration from the stainless-steel panels of the Disney Concert Hall, but adjusted their techniques to suit The Grand’s budget, says Takemori. The team created a similar dramatic effect by covering the panels with a silvery, sparkling paint.

The design of the retail spaces also required patience and creativity. The contractor and developer would agree on the details of the three levels’ arrangement around the central plaza, and then Gehry would rearrange everything, Vogel says.

“We went back to him and said, ‘It looks great, but it may not work well for how the retailers want to merchandize their wares,” Vogel says. Gehry asked Vogel and the rest of the team to guide him through the retailers’ priorities and business objectives, and the retail spaces were redrawn once again.

“It was a very nice interim process that not all developers have patience for,” Vogel says, “but because the design just kept getting better, we just kept collaborating.” 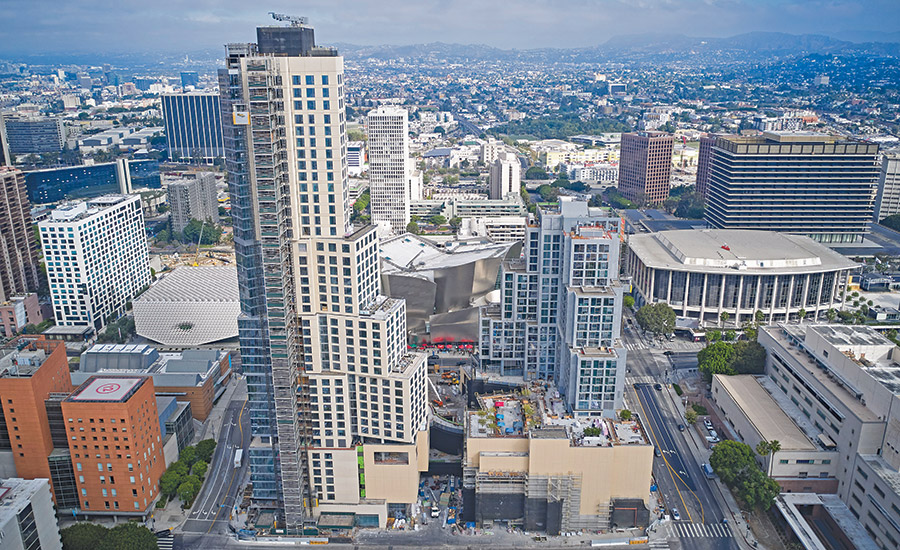 The Grand’s transitional spaces are hidden from view.
Photo by Weldon Brewster, courtesy of Related-Core

By February 2020, The Grand was about a year into construction, about five or six levels above grade, Widen says. All excavation and basement construction were completed, and workers were placing the concrete decks. Then COVID-19 hit, and California’s cities quickly shut down many construction projects.

“I had lived and worked in China for 11 years, and I was there during SARS,” Vogel says. “So I had an idea of what it was like to work during a pandemic. I was probably the first one in downtown LA buying a large supply of masks and gloves.”

With a peak worker population of 800 people, efficient health checks and scanning were a priority. The team used a phone app that allowed workers to pre-scan before entering the construction site. Fortunately, most work was in the open air at this point. Whenever a worker tested positive for COVID, the team shut the construction site down and cleaned. “This happened two to three times,” Vogel says. “It was very expensive.”

After that, the CDC issued new guidance that eliminated the need for site closures, but the pandemic cost the project two months of work, with one month recovered through overtime and other tactics, Vogel says.

“We had our plan for COVID in place very quickly,” Vogel says. “A lot of what we did ... became the code locally in LA for how to deal with the pandemic on a construction site.”

Award of Merit: Office/Retail/Mixed-Use: The Grand 2

Related Cos. Breaks Ground on Gehry's Grand in Los Angeles