This website requires certain cookies to work and uses other cookies to help you have the best experience. By visiting this website, certain cookies have already been set, which you may delete and block. By closing this message or continuing to use our site, you agree to the use of cookies. Visit our updated privacy and cookie policy to learn more.
Home » University of Utah Building Team Finds an Innovative Structural Solution for a Difficult Site
Mountain StatesMountain States Construction Projects
Digging Deeper | Higher Education

Perched on a delicate site and hemmed in on three sides, the University of Utah’s HELIX building has declared its independence.

The 259,000-sq-ft office complex sits on 45-ft-long specialized piles to avoid placing any weight on the ground beneath. A previously installed shoring system had built up the site’s grade to match the surrounding area, but the ground can’t support additional loads, especially a new 12,000-ton building.

The HELIX (Healthcare Educators, Leaders and Innovators compleX) project broke ground in 2021 and is due for completion in October. The site was just a sloping area on a hill until the university built a neighboring parking garage a few years ago. The uneven terrain left the east side of the garage exposed, so contractors built a 40-ft shoring wall and raised the grade of the future HELIX site to make it more level with the top of the garage. 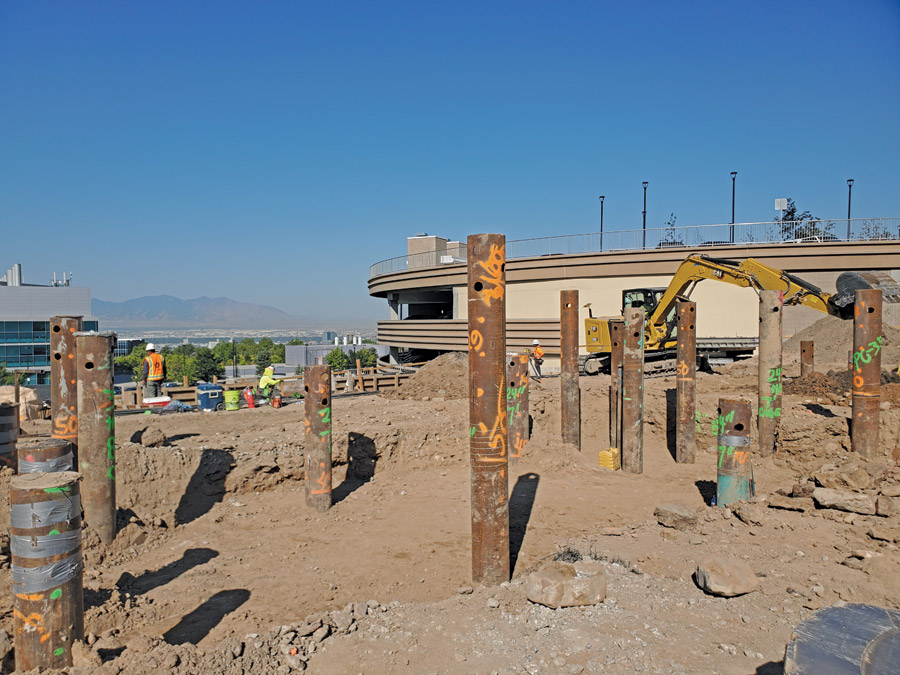 “That shoring wall ended up being on the west side of the HELIX project site, about four stories tall,” McDonald says. The university also has installed steel piles and soil nails to stabilize the ground.

While the existing shoring system created a more regular grade, the ground could not support any additional weight, McDonald says. Added weight would apply pressure to the shoring wall, and moving a new building farther east from the wall wasn’t an option due to a four-lane road and two light rail tracks on the other side of the site.

“The site was locked in. Any new building had to support itself without any loading on the shoring that was already there,” McDonald says.

This posed a design problem for the HELIX project team, led by Okland and MHTN Architects Inc. in Salt Lake City, with civil engineer Civil Solutions Group in Provo, Utah. The team considered building a second shoring wall or removing enough dirt from the site to balance the building’s weight, McDonald says. In the end, they decided to support the building with piles. 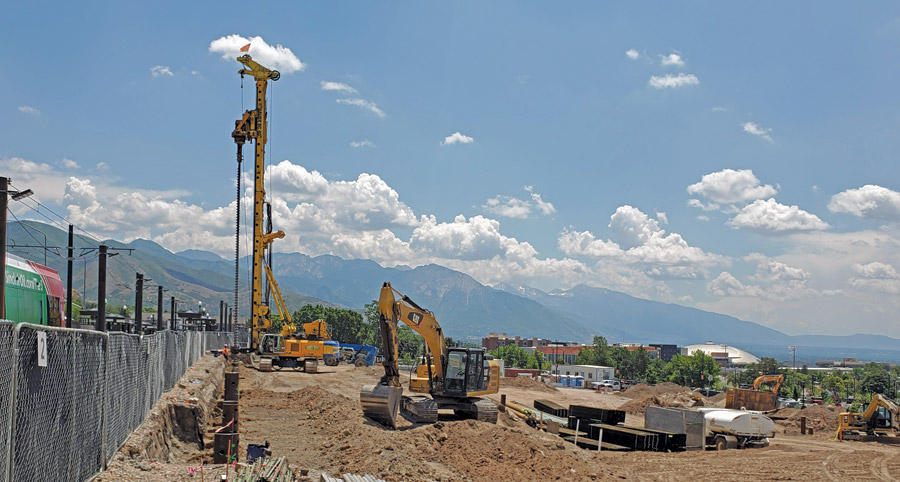 Each 45-ft-long torque-down pile was raised into the air and then drilled into the ground.
Image courtesy of Okland Construction

“The new foundation system was developed as a hybrid of spread footings and torque-down piles to weave into the existing shoring system,” says Curtis Leetham, an associate principal with MHTN.

Torque-down piles are steel tubes screwed into the ground with a large drill rig. “We drilled these torque-down piles in there, then filled them up with concrete with a rebar cage,” McDonald says. “Then the building loads were placed on those piles and that transfers the load to below the bottom of the existing shorings. And the weight of the building is not carried by the dirt.”

When installing each pile, the entire 45 ft of steel was lifted into the air, then drilled into the ground, he says. Sometimes the heat from friction causes issues. “One of the drill tips will break off just because of the heat of drilling these things in like that,” McDonald says.

The 85,004-sq-ft HELIX site is bound on three sides with a shoring wall to the west, light rail tracks to the east and another building on the north side. This allows access on only one side. A southern parking lot serves as a site for staging and construction team offices, and crews are using a tower crane to lift equipment, materials and buckets of gravel and dirt. 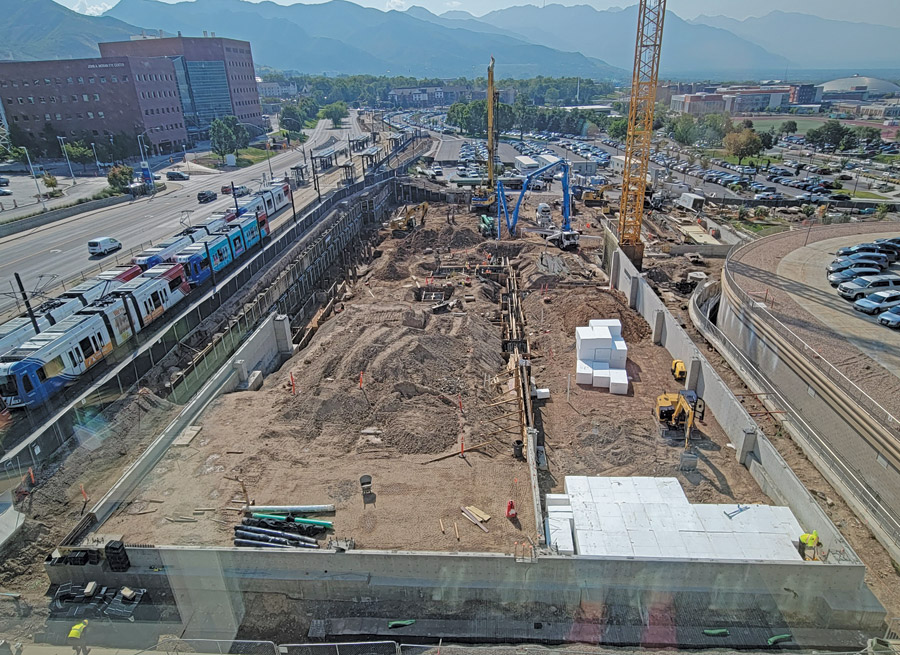 To further reduce weight on the site, the team used geofoam blocks instead of dirt to help build up the grade.
Image courtesy of Okland Construction

The crane also helped place geofoam blocks, a Styrofoam material often used in road construction, to lighten the ground itself. Geofoam takes the place of heavy dirt but is still just as strong. Measuring about 4 to 5 ft tall and 6 to 7 ft long, the geofoam blocks helped build up the grade between the HELIX building and the existing shoring wall, McDonald says.

After placing the blocks in the ground, crews covered them with dirt and poured concrete over them. While geofoam is more expensive, the project team found the blocks worth the cost.

“We drilled these torque-down piles in there, then filled them up with concrete with a rebar cage.”
— Bret McDonald, Project Manager, Okland Construction

“If they were cheaper, you would see them everywhere,” McDonald says. “Their purpose here is just weight reduction.”

Other design issues included coordinating the building’s height with FAA flight paths and protecting the university’s view corridors, MHTN’s Leetham says. The design of the HELIX building also includes a chilled-water heating system to supplement the traditional HVAC. The team installed lines leading from the university’s central plant to the building’s transfer exchanger, where heat is drawn from chilled water.

The HELIX building’s design also includes a 422-ft-long sky bridge that connects the complex to the university’s system of covered bridges between campus buildings. The bridge will extend from the building’s fifth story and stretch over a state road and over train tracks serving the city’s TRAX light rail system. Then the bridge will connect to the rest of the bridge system near the John A. Moran Eye Center, McDonald says. 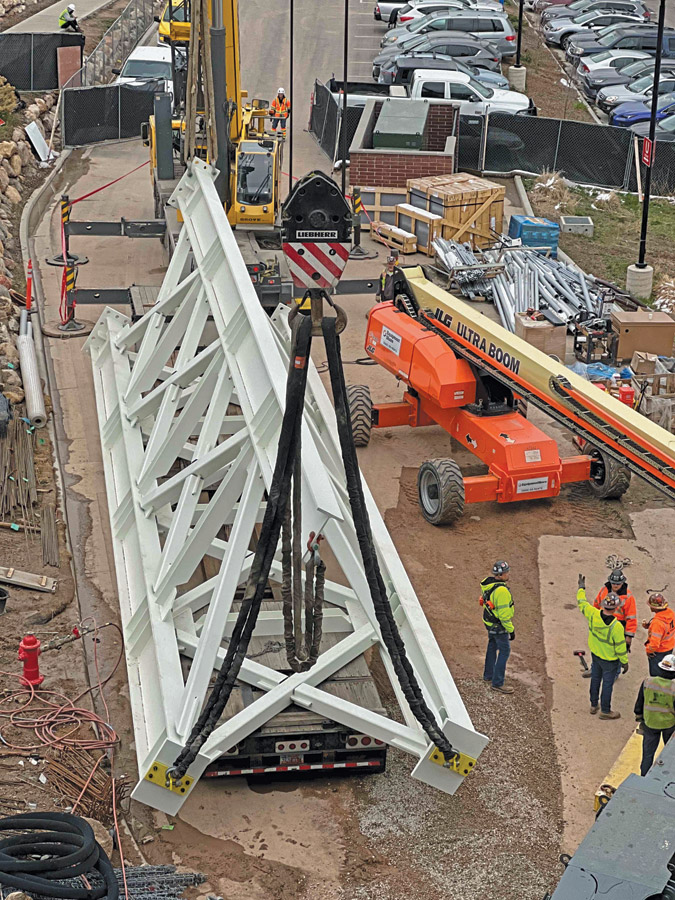 Crews hoist a column for the HELIX building’s 422-ft-long sky bridge, which stretches over the train tracks and a state road.
Image courtesy of Okland Construction

When building the structures to support the bridge, the team tried to avoid underground utilities on the other side of the road. Workers dug 42-in.-dia holes, then installed steel sleeves before drilling piles.

The bridge’s steel assembly, planned for May 21, must be erected in a single night for the 200-ft span. The work requires closing Mario Capecchi Drive, a four-lane state road with two rail lines that provides access to University of Utah Hospital and Primary Children’s Hospital. The planned road closure requires close coordination with the Utah Dept. of Transportation, McDonald says. 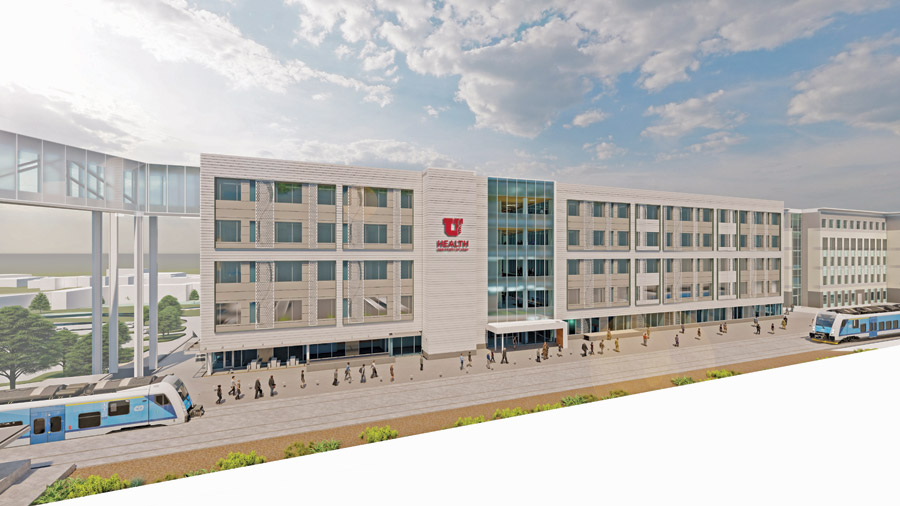 The HELIX building’s bridge (left side of the image) connects with the university’s system of covered bridges near the John A. Moran Eye Center.
Image courtesy of MHTN Architects

The project team also is working with both hospitals for alternate emergency access during the closure. The TRAX light rail agency also is involved since power will need to be shut down, although its trains do not run at night.

“The university requires us to put together contingency plans as well,” McDonald says. “What if something goes wrong? What if we need to change things around? What if we hit something? What if we damage the power lines anyway?”

The project also has faced broader challenges, including labor shortages and some difficulty with procurement of materials and equipment during Salt Lake City’s current building boom, McDonald says. Freezing weather in Texas shut down factories, while the pandemic affected everything else, and the supply chain issues continued.

Procuring the HELIX’s thermoplastic roofing material took nearly a year since its popularity as a building cover has kept it in short supply. Using lean principles helped keep design and construction on track, and so far, the project has been delayed by only six days, according to McDonald. 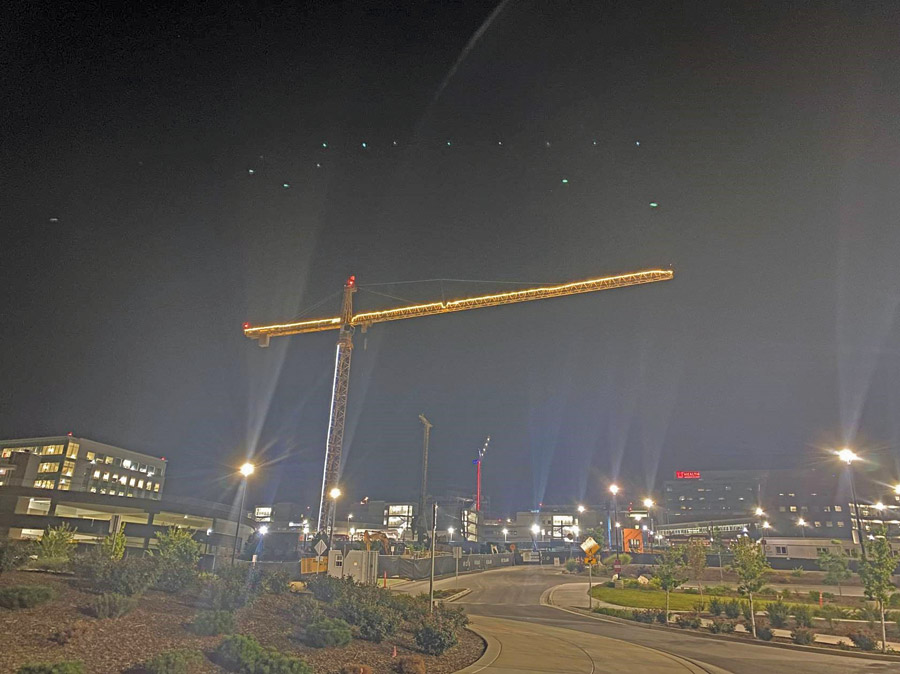 With the site blocked on three sides by train tracks, another building and a parking garage, a tower crane is essential for moving materials and equipment.
Images courtesy of Okland Construction

“Spending more time on the planning and design effort has made time during construction more efficient and effective in reducing the amount of change orders on the job,” Leetham says.

Located on the university’s 1,534-acre Salt Lake City campus, the HELIX building’s flexible space will support about 1,200 full-time employees and 400 medical residents. Many of the occupants destined for HELIX will move over from the university’s current School of Medicine, which is scheduled for demolition.