This website requires certain cookies to work and uses other cookies to help you have the best experience. By visiting this website, certain cookies have already been set, which you may delete and block. By closing this message or continuing to use our site, you agree to the use of cookies. Visit our updated privacy and cookie policy to learn more.
Home » Georgia Power Says Its Coal Ash Cleanup Tab Has Risen to $9 Billion
Southeast Construction NewsEnvironmentPower & IndustrialCompaniesRiskSafety Health

Georgia Power now says it will cost $8.96 billion to shut down its 29 coal ash storage ponds and 12 landfills, up from its original estimate of $7.6 billon while environmentalists fight the company’s plans to make customers pay for cleanup and closure.

The Georgia Court of Appeals on Oct. 26 rejected the Sierra Club's appeal of the state Public Service Commission’s decision that allows the power company, a unit of Southern Co., to pass remediation costs to ratepayers and earn a rate of return. “Georgia Power should not earn a profit for mismanaging coal ash for decades,” David Rogers, Sierra Club southeast regional director for the Beyond Coal Campaign, told ENR. "If it had done something, the cost would be much lower."

The group has asked the appeals court to reconsider its decision and may file a new appeal to the state Supreme Court , continuing to challenge of further cost-shifting proposals before the commission, he says. The approval was for past costs only, a total of $525 million.

Georgia Power has now spent $856 million on coal ash closure efforts, it said in an October filing to the commission. The total to close all coal ash ponds, which contain less than half of the utility’s legacy coal ash generation, is now estimated at $7.1 billion, and the cost to close site landfills is $1.9 billion. “The current forecast applicable to retail customers over the next 60 years or more is approximately $8.96 billion,” the utility said.

A utility spokesman says the firm "took early action to quickly and safely begin closing all of its ash ponds with a key priority being to protect water quality .... and is in the process of completely excavating 19 ash ponds with the remaining 10 being closed in place using proven engineering methods and closure technologies. The company has made closure construction progress at 22 ash ponds at 9 facilities."

Closure plans for the landfills are site-specific, and each project is progressing with design, dewatering and construction based on site-specific schedules and are at different stages of progress, the October report says.

Engineering, dewatering and permitting activities have advanced and groundwater monitoring and reporting is ongoing as more sites move into active construction, the report says, with project work locations depicted in the graphic below: 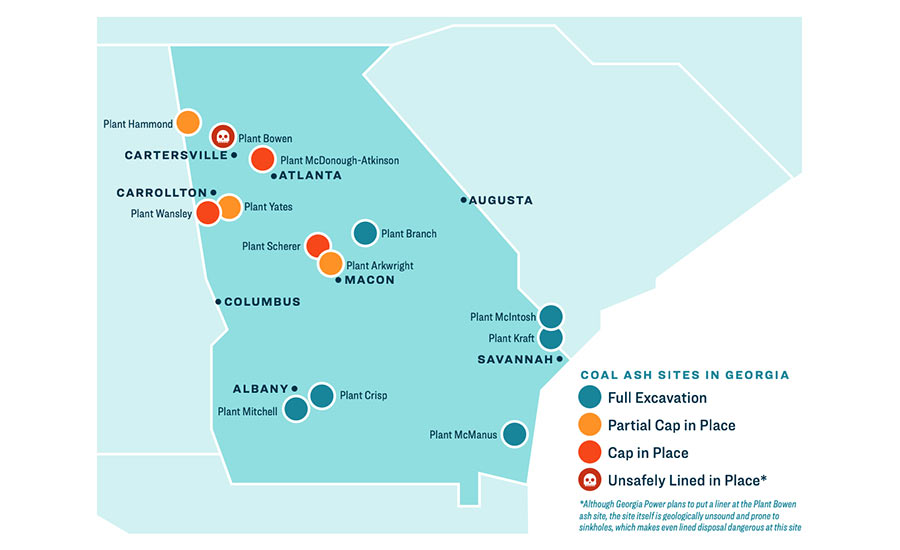 Georgia officials issued draft permits for two landfill closures during the summer, both challenged by the Sierra Club, which said that leaving coal ash in landfills on karst terrain is unsafe, even if they are lined. “They don’t protect the groundwater,” Rogers says.

"The company worked with third-party professional engineers and geologists to design the plans on a site-by-site basis, specifically including geology of the area, among other factors," says the Georgia Power spokesman. "The closure is designed to be stable" throughout the process and afterward, he contends. "Design elements include things like foundation improvement plans, structural integrity monitoring and inspections performed by licensed professional engineers during closure and after closure is complete."

The utility expects coal ash permitting will continue through 2023 with final landfill closures in 2051. It is considering adding solar generation at closed sites.

Georgia Power monitors groundwater at ash ponds and landfills and has installed comprehensive groundwater monitoring networks including more than 600 wells at its power plants, the October report says.

It partnered last year with the Electric Power Research Institute last year to open the Ash Beneficial Use Center, which will test pilot project technologies in ash beneficial reuse, says the Georgia Power spokesman. Her adds that the company already recycles more than 83% of fly ash produced from current operations and more than 93% of all ash and gypsum, including for reuse such as in concrete production and other construction products.

Georgia Power is negotiating with bidders who responded to a request for proposals for beneficial use of stored coal ash and expects to make a selection later this year or early 2022.

"We are in the process of finalizing the RFP process to select successful bidders," says the spokesman.

North Carolina plants had more stringent cleanup requirements under a state law enacted in response to the massive 2014 coal ash spill into the Dan River.

Duke historically shares costs between the two state jurisdictions, with North Carolina paying 75% and South Carolina paying 25%, but the court said the commission, when cutting the coal ash reimbursement in half, followed its past policy of not allowing the sharing of costs related to state-specific laws.

The commission "explained its consistent past practice was to disallow costs incurred as a direct result of one state's laws, which are specific to that jurisdiction," the court said. "Reasoning the Dan River spill was the impetus behind the North Carolina ... enactment of [the law], the [commission] concluded it would be unreasonable to require South Carolina customers to pay costs incurred because of Duke's admitted criminal negligence and the resulting unilateral action" of North Carolina.