Updates on projects and companies in the Southwest region.

“The new fieldhouse has made WFHS more than just a football school. [It is now] a bigger target for great athletes.”
— Cole Norman, WFHS Sophomore

AP began construction in September 2020. Despite labor and materials delays due to the pandemic and bad weather, AP delivered the replacement facility before the start of WFHS’s 2021 football season. The district financed the new fieldhouse with funds from a $70-million bond approved by voters in 2013.

KORE Power Inc. says its new KOREPlex facility in Buckeye, Ariz., will be built by national design-build company Yates Construction. Some of the advanced manufacturing attributes of the facility will include fully automated cell assembly lines, automated material movement and handling, an automated packaging line and a pandemic-ready design to allow for safe workspaces. The facility will be fully climate controlled and include a solar-ready covered employee parking lot.
KOREPlex will produce nearly 60 million battery cells annually. The facility will have the capacity to produce enough power for 3.2 million homes each year. KORE plans to start construction of the facility by the end of the year with the goal of beginning production in mid-2023. 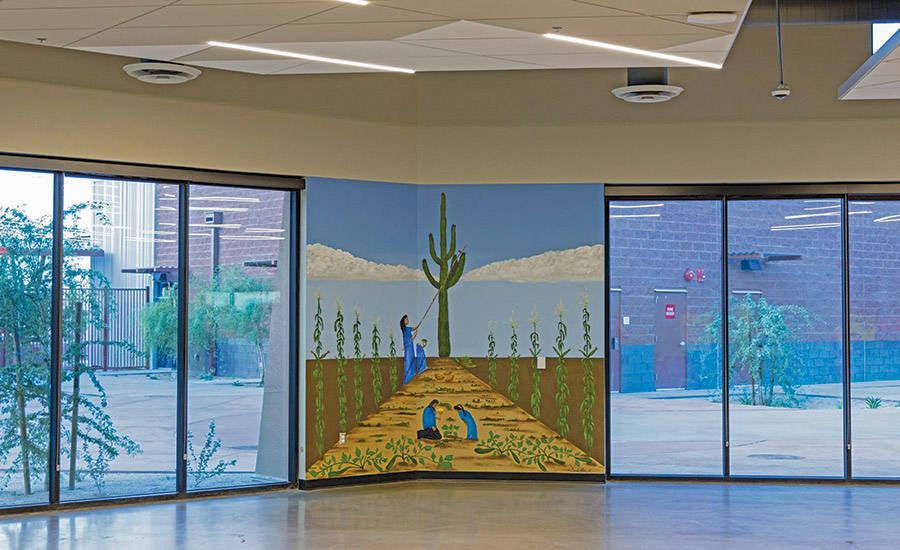 Construction is complete on the new Blackwater Community School on the Gila River Indian Community, southeast of Phoenix. The school serves preschool, the Family and Child Education Program (FACE) and the K-5 grade school. The two-year project on the 7.43-acre campus, led by Gilbane Building Co. and Rosendin, based on a design by Breckenridge Group, required a phased approach, with key parts of the project scheduled during winter and summer breaks to minimize disruptions for students.

The $25-million replacement project incorporates culturally significant artwork throughout the two-story classroom building, the media center, multipurpose building and cafeteria. The Blackwater Community School Culture Committee provided insight for the art in partnership with the Blackwater Community School Board.
Interior and exterior murals throughout the campus depict scenes of crop harvesting, desert landscapes and petroglyphic symbols. The school serves two tribes, the Akimel O’Otham, who can trace their ancestry to the Hohokam, and the Pee Posh, who come from Yuma ancestry.
“Agriculture is at the heart of the Akimel O’Otham culture,” said Jagdish (Jack) Sharma, principal of Blackwater Community School.

The Southern Nevada Water Authority has awarded a contract to Atkins to provide engineering services for the Lower Las Vegas Wash Stabilization Project. It will protect infrastructure by preventing channel degradation through construction of new grade control structures on the Lower Las Vegas Wash in the Lake Mead National Recreation Area, thus improving water quality in the lake.
The Las Vegas Wash, in Clark County, Nev., is the primary drainage of the Las Vegas Valley, carrying urban runoff, treated wastewater and floodwater into Lake Mead and the Colorado River. It serves as a return flow conveyance, safely recycling and returning highly treated wastewater back to Lake Mead and extending the community’s water supply. It is also an important environmental resource, providing wetland habitat and sustaining plants and animals that would not otherwise be found in the desert.
“The Las Vegas Wash is a critical component of water resource management for Southern Nevada, and with Lake Mead levels at historic lows, slowing the wash’s high rate of erosion and channel degradation is crucial for protecting water quality for millions of Americans,” said Matt Wilkinson, Atkins project manager.

Work is underway on the initial 342-unit residential complex in Evora, a mixed-use development in southwest Las Vegas. The Grand Canyon Development Partners project includes upscale living spaces and is in walking distance to an onsite public park and vendors at the property’s soon-to-be completed 118,000-sq-ft commercial building. Amenities will include underground parking; a fitness center; a recreational facility with pools, pickleball courts and a putting green; a dog park; and charging stations for electric vehicles. The contractor is OS Construction Services.