As if the construction sector didn’t have enough of a workforce crunch before COVID-19, many now wonder how it will weather pandemic-driven forces they fear could spur more voluntary departures and talent gaps—part of a growing broader business trend beyond the industry, dubbed the “Great Resignation,” but which could impact economic recovery.

A record 4.3 million U.S. workers quit jobs in August, about 2.9% of the workforce, say federal statistics, with virus-generated workplace upheavals spurring many to reassess employment and careers for the first time.

“Industry women I have spoken with cite burnout as the top reason they have left a job or are thinking about leaving,” says Amy King Lewis, assistant professor of construction engineering technology at Oklahoma State University and a former project manager, who is researching construction departure trends. “Workers have had the chance to reevaluate life choices and many say they realize work was unfulfilling or expectations were unreasonable.”

Generous federal stimulus benefits “have made workers more comfortable not working,” says Ben Brubeck, Associated Builders and Contractors vice president. While these expired Sept. 6, with 26 states also choosing to end programs this past summer, studies indicate those states experienced little employment growth as a result. “It’s harder now to get people back in the game,” he says, estimating a 430,000-person skilled craft worker shortage currently.

Bill Fountain, head of Gardner Construction in western Massachusetts, says his small firm is desperately short of workers, limiting projects he can take on. The contractor, which is renovating a historic dam in Springfield, would add to his payroll of 16 but can’t find prospects, despite trying a range of recruitment efforts, including ads on Craigslist. “I don’t know where to look any more,” he says.

The labor shortage "is damning, and all trades have been impacted,"  says Jennifer Todd, a demolition and remediation subcontractor CEO in Florida "COVID-19 is not over, and we continue to expend resources to keep our staff while maintaining project deadlines. We’ve also seen a rise in general liability and workers comp costs," she adds, due to the pandemic. 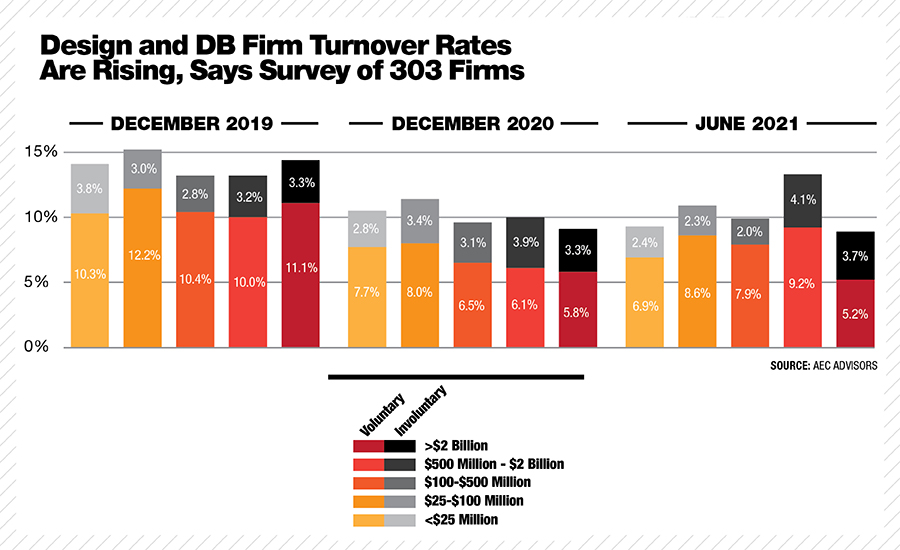 “We’re seeing a shortage across all three of our key positions—estimators, project managers and superintendents,” says James Donaghy, executive chairman of national building construction manager STO Building Group. But the trades shortfall is largest, he notes, “putting extra pressure on our field teams” just as clients are unleashing pandemic-held projects. “Recruiting and retaining talent is the top priority for any large CM firm in the next five years,” Donaghy says. “We’re driven by finding the right people for long-term sustainable growth.”

Surveys of design and design-build firms show turnover rates on the rise in recent months after falling 35% in 2020 from the previous year, says Andrej Avelini, president of AE management firm AEC Advisors, based on its survey of more than 300 firms (see chart above). He says emerging data indicate “a return to higher levels.”

That trend also is spurring compensation boosts that could cut into recent rising profit levels for firms, as COVID cut travel and space costs. “We expect our pricing will increase correspondingly,” says Joe Monaco, president of employee-owned consultant Dudek. An instant poll of attendees at the recent CEO conference held by management consultant EFCG found 90% citing the “war for talent” as the No. 1 trend affecting employer decision making. 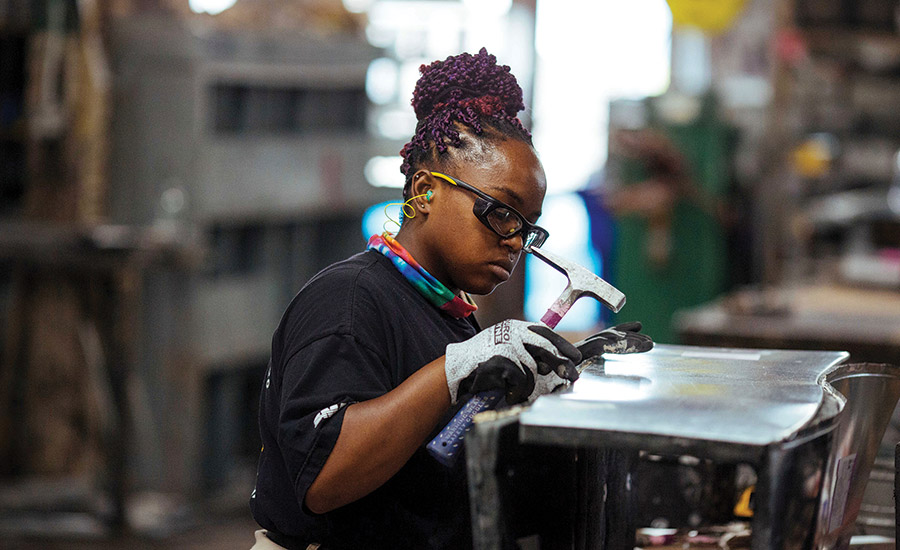 Shot or No Shot

COVID vaccine mandates from employers, clients and governments in the U.S. and Canada have boosted turnover concerns, with indications of industry worker opposition and departure threats, particularly as announced Biden administration rules for federal contractors and large firms take effect.

A study by Carnegie Mellon University and the Center for Construction Training and Research shows the 57% industry worker vaccination rate trailing the 81.3% rate in other fields. Just 40% of 1,170 respondents to an open-participation online ENR poll said, as of mid-October, that they support vaccine mandates, including the U.S. Occupational Safety and Health Administration emergency temporary standard set to require vaccinated staff or weekly negative tests for all employers with 100+ employees.

While 63% of ENR poll respondents said they would stay in their jobs if required to vaccinate, 78% of respondents anticipated that affected employers would lose workers.

ABC's Brubeck met recently with White House officials to express contractor concerns about potential worker departures, particularly with the huge infrastructure funding package looming, but he sees no change in the Dec. 8 vaccination deadline for federal contractor employees and says the OSHA temporary standard’s release is “imminent.”  He says "jobsites are safe but sequencing is tight. A lot of companies are trying to manage owners’ expectations." 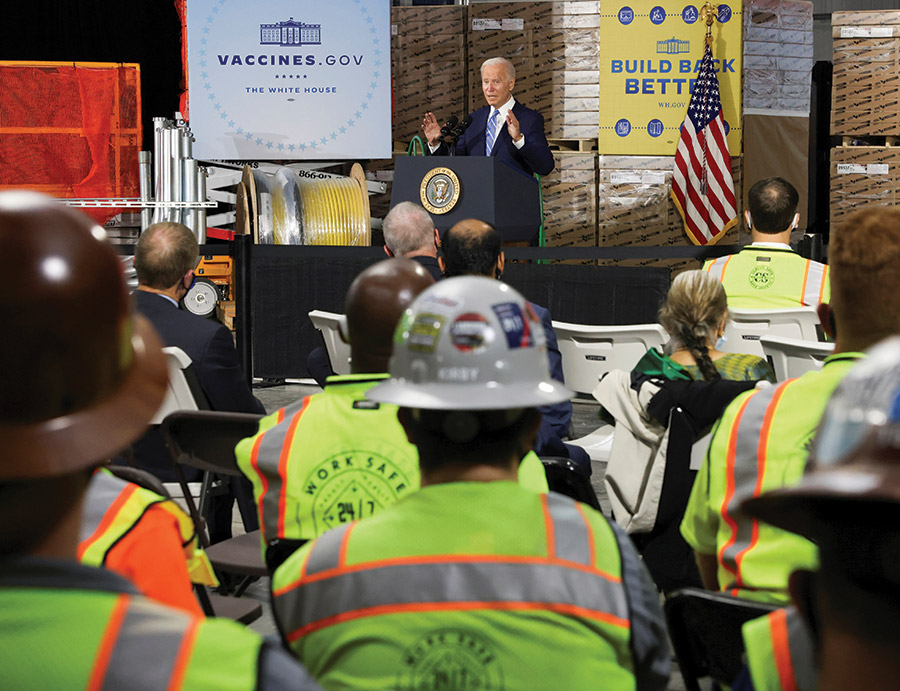 As a post-COVID retention incentive, HITT Contracting paid out bonuses to about 60% to its 1,300 workers, up to $10,000 each, for a total of about $4 million. “It’s important to us to ensure that team members know they’re the heart of our business, especially during one of the most difficult times in recent history,” says CEO Kim Roy. “This labor shortage was already a struggle at the end of 2019.” She notes unfilled company roles even with 15% staff growth this year that includes new positions filled such as data analysts, research managers “and experts in employee and client experience.”

Robotics are boosting productivity and safety, “which in turn attracts talent excited by emerging technologies,” Roy says, noting that teams used Hilti’s semi-autonomous Jaibot to drill ceiling anchors on a large base building jobsite in Washington, DC. "Work that would normally take 10 days was completed in just four while relieving workers from the strenuous and potentially dangerous repetitive task of drilling overhead, allowing them to focus energy elsewhere." she says.

The contractor also has expanded its human resource operation, Roy points out, "but we also see our team members as an extension of our recruiting team through their personal and social media networks."

Despite Boston’s building boom, unions officials there claim they are keeping up with labor demand. “We have not had a situation where we have not been able to staff a project,” says Frank Callahan, president of the Massachusetts Building Trades Council.

Federal and state stimulus benefits “have made workers more comfortable not working. It's harder now to get them back in the game.”
—Ben Brubeck, Associated Builders and Contractors vice president

But many also point to the bigger push and critical need for workforce diversity efforts.

Todd, who is Black and has faced bias incidents on jobsites that include deliberate vandalism of her equipment, says construction "can't afford not to be inclusive. It's vital to industry growth." She suggests that firms create internal set-asides and diversity goals for projects, "not simply when required. The only way to see change is to take deliberate action. What gets measured gets done. The system has been broken a long time."

Yvette Pearson, a civll engineering educator and newly named University of Texas-Dallas vice president for diversity, equity and inclusion, told virtual attendees of a recent American Society of Civil Engineers' conference that "we can't solve problems faced by a heterogeneous society with homogeneous problem solvers."  She added, "we cannot design resilient infrastructure ... without recognizing that social justice is a huge part. We have to use engineers’ knowledge for good social outcomes."

Organizers of the inaugural Construction Inclusion Week in mid-October, launched by several large contractors to focus more action on outreach and needed culture change needed to have more under-represented groups working on jobsites and rising in companies. said that more than 1,100 firms participated.

Initiative co-Chairman George Pfeffer, CEO of DPR Construction, acknowledged that “one week won’t solve” nagging industry issues, but in a fragmented sector, he says, “groups are having conversations they never had before.” Pfeffer sees the effort as an annual event. “It makes social sense, but more business sense, and people are getting it,” he says. "It has the potential to make as big an impact as anything else."

In a meeting last month with U.S. Labor Secretary Martin Walsh, a construction trade union member and former regional official, firm and union executives sought workforce support options that include immigration reform to legalize work status for “another million or so skilled craft out there,” said Pfeffer. Walsh said the U.S. is “35 years overdue on a plan” to address reform issues, according to one meeting member’s assessment, but “without congressional action, cabinet departments … have their hands tied.” Walsh also urged firms to ramp up efforts to assist training organizations access "significant" available department grants and other funds to develop and expand programs, said the member synopsis.

Carpenters’ union General Secretary-Treasurer Tom Flynn says women now make up about 9% of union ranks nationally and, as of late 2020, about 11% of all trade apprentices in Massachusetts, adds Callahan, up from under 5% in 2012.

While Midwest region carpenters have had a union-offered maternity leave benefit for several years, Flynn could not estimate when other regions would offer one. Also, federal funding for expanded daycare to assist industry parents with erratic construction shifts, which now is in the $3.5 trillion Biden reconciliation bill that faces cutback to $1.5 to $2 trillion, could fall victim to congressional politics.

Callahan says Boston unions, with help from some developers, have launched a pilot program that accepts children as early as 5 a.m.

Passage of a new infrastructure funding bill could be a mixed blessing in light of workforce challenges. The industry could be short 1.5 million to 2 million workers by 2025, estimates Boyd Worsham, president of the National Center for Construction Education and Research.

With staffing crunches of their own. public sector agencies could be challenged in how quickly they can set up and award funded projects, STV CEO Greg Kelly told peers at EFCG. “Agencies face the same demographics we do,” he said. “There will be a lag effect for how this flows into the pipeline.”

Steven Hall, American Council of Engineering Cos. senior vice president, added that it is “uncertain if new contractor vaccine mandates flow down with federal dollars to state DOTs and transit agencies.”

While studies show most employees prefer to keep remote work a big part of their worklife, Kelly raised issues of the impact on project team dynamics in executing the expanded infrastructure effort, as well as other programs.

“We can’t do this from our couch wearing a hoodie,” he says. "We're in a project based business and we have to find ways to bring our employees together for team approaches."