This website requires certain cookies to work and uses other cookies to help you have the best experience. By visiting this website, certain cookies have already been set, which you may delete and block. By closing this message or continuing to use our site, you agree to the use of cookies. Visit our updated privacy and cookie policy to learn more.
Home » Dutch Dike Being Raised, Reinforced to Handle Sea Level Rise
Construction methodsSustainabilityWater & Dams
Resilience

90-year-old structure was in need of upgrade

For nearly 90 years, a 32-km dike on the Dutch coast has kept the North Sea from inundating a huge area of the Netherlands, around Amsterdam. Now, to counter the ravages of time and rising sea levels, work to upgrade the Afsluitdijk to handle a 10,000 year flood is well under way, although much delayed by erroneous design data.

The government project is raising the level of the old Crane barge Titaan placing XblocPlus armor (closing dike) by about 2 m while reinforcing the sea-facing side with a layer of newly developed concrete armor blocks.

Two new sets of sluices are being added to the three existing groups, which are being reinforced. Six of western Europe's largest pumps will discharge water from the IJsselmeer (Lake IJssel) into the Wadden Sea, a system of intertidal sand and mud flats between the coast and the North Sea. 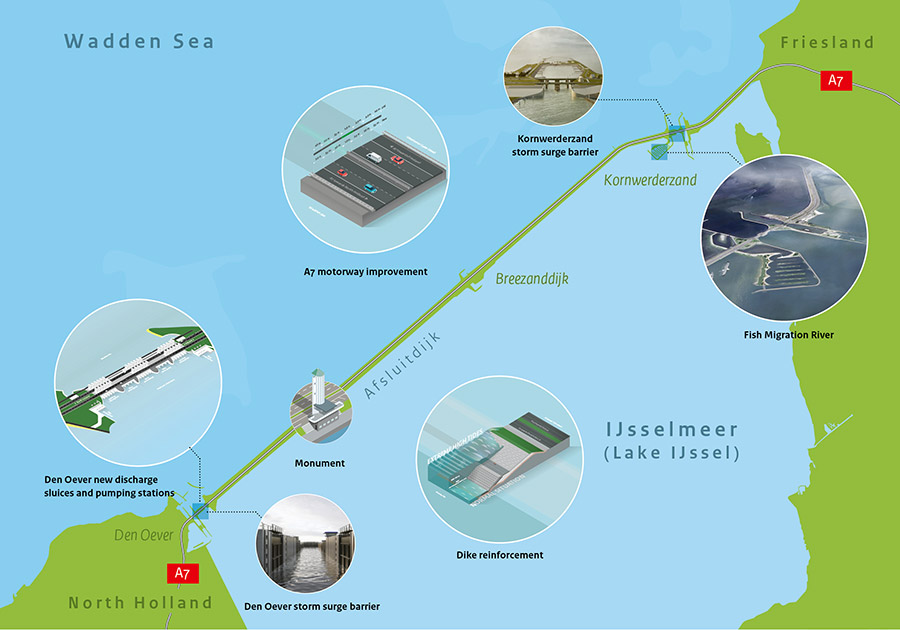 An overview of the Afsluitdijk Credit: Rijkswaterstaat

Other elements of the project include storm surge barriers and a 1 km long meandering river on the lake side for millions of migratory fish to transition between the salty sea and the IJsselmeer's fresh water.

The dike project is contractually scheduled for completion by Jan. 1 2023. Then, the special purpose company Levvel B.V. is due to start 25 years' maintenance under its public private partnership with Rijkswaterstaat, Netherlands’ water infrastructure authority.

But while most of the project is broadly on schedule, the sluices are being redesigned because water level and wave data provided to the contractor by Rijkswaterstaat were found to be underestimated.

In a letter to parliament this May, the then infrastructure minister, Cora van Nieuwenhuizen, confirmed that resulting redesign would push back the sluices' completion to 2025. Rijkswaterstaat had, she added, agreed to pay Levvel about $140 million toward the extra work and to trigger the disputes procedure to settle the full compensation. 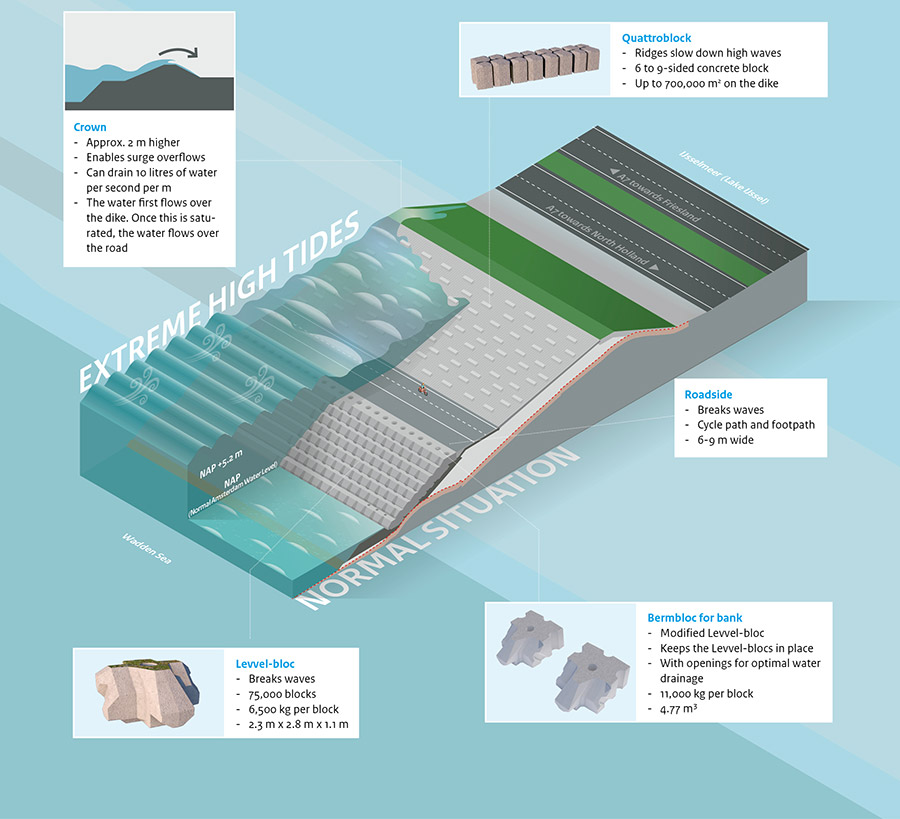 A schematic of the rebuilt dike's profile. Credit: Rijkswaterstaat

For centuries, the desire to keep the North Sea out of the Zuiderzee, a 5,000 sq km inland sea, was frustrated by inadequate technology. Engineer Cornelis Lely produced a viable design 130 years ago, according to the official history. On becoming minister of water management, Lely made the project government policy in 1913. But his plan was halted by the start of World War One the following year.

A major flood in 1916 and the growing need for agricultural land helped secure parliamentary approval for the project in 1918. Work started slowly in 1920 and speeded up by mid decade. The dike was closed in 1932, creating the 1,100 sq km IJsselmeer for development and agriculture.

Of the 32 km closure, which carries a four lane highway, the clay core dike runs for about 24 km, says Lukas Meursing, Rijkwaterstaat's project environmental manager. Concrete structures, such as the sluices at the south end, account for the rest. The dike's sea face was originally lined with countless basalt blocks placed manually by an estimated 5,000 workers. The blocks are being covered with new concrete armor. 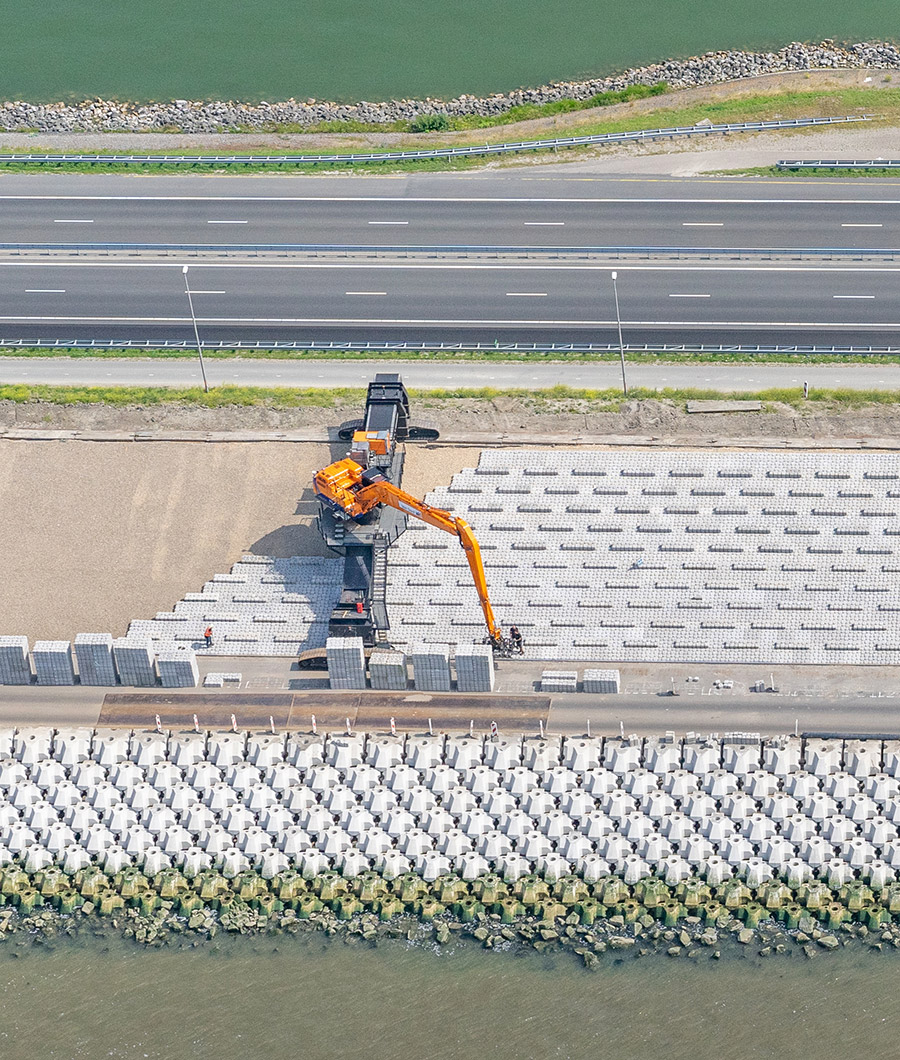 The two types of armoring blocks used on the dike. Credit: Rijkswaterstaat

Afsluitdijk "is our front door," says Meursing. It is the first line of defense in front of smaller dikes in the inner water. The system survived catastrophic floods in 1953, causing over 1,800 deaths mainly in the south west. While keeping the sea out, "there was some damage but its didn’t break," he adds.

The 1953 flood triggered the multibillion dollar, 25-year Delta Works program of storm barriers and other flood defences at the sea outlets of the Rhine-Meuse-Scheldt  delta near Rotterdam. The catastrophe also led a increase in design flood risks by factors of up to 100 to an unprecedented one in 10,000 years.

According to Meursing, the 10,000 year flood would be the result of sea level rise and waves of about 9m.

To upgrade the aging dike, Rijkswaterstaat in early 2018 selected the special purpose company Levvel B.V. for the design, build, finance and maintenance deal with a net present value then forecast at about $640 million. The construction cost, included in this sum, remains undisclosed. 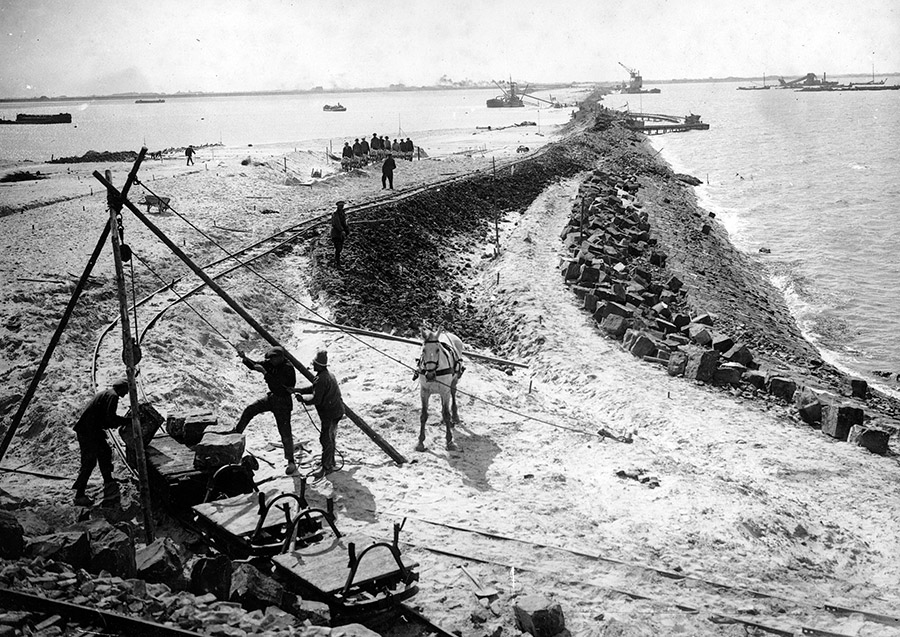 Construction of the original dike in the 1920s. Credit: Rijkswaterstaat

Levvel is 46% owned by each Van Oord Aberdeen Infrastructure Partners B.V. and BAM PPP PGGM Infrastructure Coöperatie U.A. A financial investor holds the remaining 8%. A joint venture of BAM Infra and Van Oord Nederland is delivering the project under a design/build contract with Levvel.

The deal was financially closed late in May 2018, with the companies investing about 7% of the required financing with equity and securing loans for the rest, says Johan Vergeer, Levvel's project director. Debt was guaranteed by a special European Union facility designed to leverage private investment in infrastructure.

Levvel will recoup its investment over 25 years through quarterly fees paid by Rijkwaterstaat. The payments will depend on performance in terms of preventing floods, ensuring adequate outflows of lake water to the sea, maintaining ship traffic through the locks and keeping the highway open, says Vergeer.

To increase discharge capacity from the lake, large pumps and two set of sluices will be added to the existing three. Credit: Rijkswaterstaat

Rijkswaterstaat would have had to roughly double the dike's height from around 7.5 m to withstand fully a 10,000 year flood during its 100-year design life, says Meursing. Instead, the dike is being raised only some 2m allowing for a potential overtopping rate of 10 liters per second per meter. That "can be held with a grass layer on the inner side of the dike," he says.

Another cost saving came from the selection of concrete armoring on the sea side. Using 75,000 XblocPlus units, newly developed by a BAM subsidiary, "enabled us to have a single layer to avoid (widening) the dike," says Cees van Oosterom, the contractor's design integration manager.

The multi facetted 2.3x2.8x1.1 m blocks, weighing 6.5 tonnes each, have been placed by a pontoon crane in a 12 m wide band along the lower outer face of the dike. The array allowed the dike to be heightened, while maintaining its roughly 46 m width from toe to crest, says van Oosterom.

Using the special blocks also reduced the amount of concrete in that part of the armoring by 56% below the reference design, saving around 200,000 cu m, claims the maker.

Chips cast into each block identify its coordinates in the dike for automatic positioning, says van Oosterom. They also record each block's history from the fully automated production facility at Harlingen, some 20 km away, he adds. Simpler shaped concrete blocks line the upper 17.5 m width of the sea face to slow high waves.

Another bidding advantage came from the contractor's decision not to rely entirely on pumping to discharge excess water from the lake, adds van Oosterom. By fitting in two new sluices between the three existing sets, the contractor reduced the required pumping capacity to 235 cu m per sec, roughly halving the the energy consumption, according to Meursing.

Unfortunately, the sluices became the project's weak link when water flow data were found to be underestimates. The redesign is underway with major construction on the sluices expected to start in the second half of 2022, says van Oosterom.

The impact of the sluice delay has been "quite a considerable," adds Vergeer. But "it didn’t have a lot of impact on the dike itself". It is now impossible to complete the project on time in January 2023. But, while accepting some parts of the project will be incomplete, he adds, "we try to maintain that date".

Special Report: How Engineers Are Preparing for Sea-Level Rise