ENR Southwest's 2021 Specialty Contractor of the Year has been quick to adapt to new market sectors in a challenging year.

Diversification, agility and a commitment to cultivating a robust workforce paid off for Rosendin Electric in 2020.

With $381.4 million in regional revenue reported for 2020, Rosendin’s Southwest operations saw a gain of about $220 million over the previous year. The San Jose-based electrical subcontractor, which has a regional office in Tempe, Ariz., attributes that growth to a solid backlog of work with a key technology customer in Arizona. The firm also saw two major solar projects get off the ground—one in Arizona in summer 2020, followed by another in Nevada in the fall.

“Probably one of the biggest game changers for our revenue increase was the amount of renewable energy work that was getting done in the Southwest, along with the backlog that was in place with our technology customers from the semiconductor side as well as mission critical,” says Brandon Stephens, operations manager overseeing Rosendin’s offices in Arizona, Nevada and Texas.

During a year marked by a global pandemic, industrywide workforce shortages and a growing demand for electrical contractors in the region, Rosendin Electric maintained a sizable workload. Serving clients across various sectors, instead of specializing in just one or two, gave Rosendin a competitive advantage, says Christopher Meiers, division manager for Rosendin’s Las Vegas operations.

“That’s probably what’s helped us grow,” Meiers says. “We don’t put all our eggs in one basket. We move forward with whatever the industry is going to give us.”

Proven and emerging technologies are central to Rosendin’s operations, and the firm leverages these tools to increase safety and efficiency for its construction teams. Core services include BIM, engineering, instrumentation and controls, and service and maintenance. Specialized services include design-assist, design-build, integrated project delivery and prefabrication.

Rosendin’s Phoenix office houses the firm’s corporate BIM department, one of North America’s largest subcontractor BIM groups. That capability has helped the firm with prefabrication and packaging efforts, which have been critical during worker shortages. 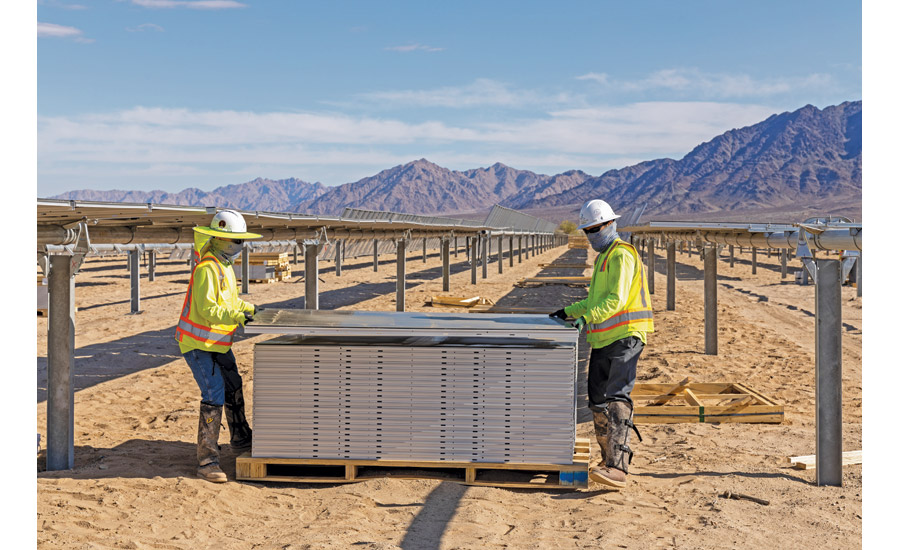 Workers unload panels at the site of the Townsite Solar PV plant, a massive solar project for Rosendin in Nevada.
Photo courtesy of Rosendin and Arevon

Big contracts are becoming the norm in Arizona and Nevada, and that’s helped fuel Rosendin’s growth.

In Phoenix, projects in the $20-million to $40-million range used to come in about once a quarter; now Rosendin is seeing opportunities of that magnitude about five or six times a month, Stephens says. “There are some big customers, but the number of big customers and the amount of momentum those clients had was really something that this market hasn’t seen before,” he says.

Rosendin has been active on about 70 different project sites in Phoenix alone, says Ben Mlinar, division manager for Rosendin’s Arizona market. “I think just the diversity and type of work and places we’re working is important,” he says. 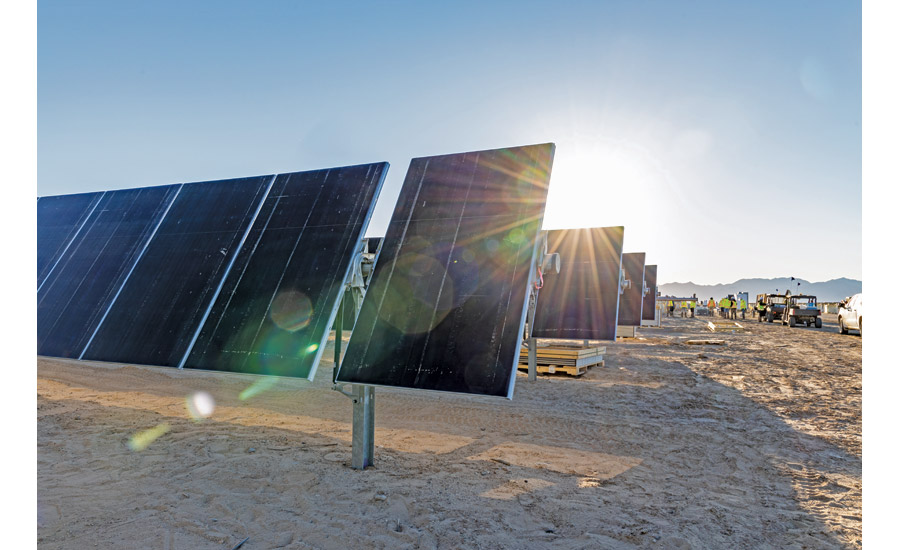 Renewable energy projects, like the $250-million Townsite Solar facility in Las Vegas, have been major drivers of Rosendin’s revenue growth.
Photo courtesy of Rosendin and Arevon

Projects are getting bigger in Nevada, too. “On the renewable side, projects that were considered fairly large even two years ago are now considered run of the mill. Projects are becoming larger and more complex,” Meiers says.

Along with riding the wave of Nevada’s renewable energy work that the firm secured before COVID, Rosendin is tapping into a heightened demand for data center projects. “Those two areas have been growing exponentially, from Reno to southern Nevada, and we’re getting a lot of that work,” Meiers says.

The work from those sectors has accounted for a sizable chunk of revenue. In Las Vegas, Rosendin’s revenues typically are in the $10-million to $20-million range; in 2020 and 2021, they were closer to $80 million to $100 million, Stephens says. 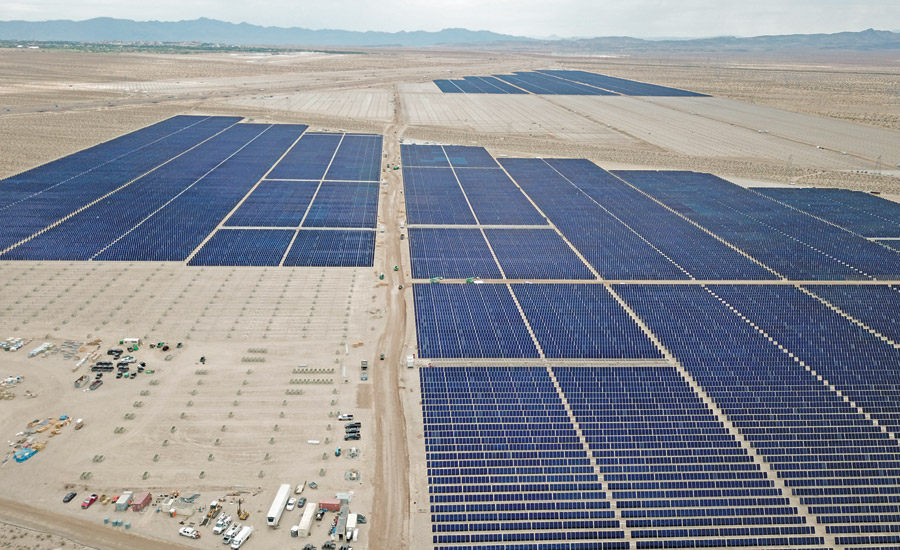 In working with renewable energy firm Arevon on Townsite Solar, Rosendin has helped bring to fruition one of country’s largest solar energy plus battery storage projects.
Photo courtesy of Rosendin and Arevon

“We don’t put all our eggs in one basket. We move forward with whatever the industry is going to give us.”
—Christopher Meiers, Las Vegas Division Manager, Rosendin

Josh Coon worked closely with Rosendin on the Townsite Solar energy plus battery storage project. “They are quick to adapt and find solutions to keep the project on track in a year where we have faced new and difficult challenges across the industry,” says Coon, who is the project manager for development and construction for Scottsdale, Ariz.-based renewable energy firm Arevon.

Having worked for Intel for 23 years, most recently as site construction manager, Jared Wride got to know Rosendin as one of Intel’s go-to electrical partners on projects large and small. Wride now works as director of construction for NTT Global Data Centers America.

One project Wride worked on with the firm was the retrofit of Intel’s Fab 42 microprocessor manufacturing plant in Chandler, Ariz. The $7-billion project was one of the largest in the region, and sourcing materials and manpower presented substantial challenges.

“We went to them and said, ‘We’ve got a challenge here; how can you help us?’ They helped us get resources from other areas. And because they’re a big nationwide company, they had some ideas for training and what we could do with recruiting,” Wride says. 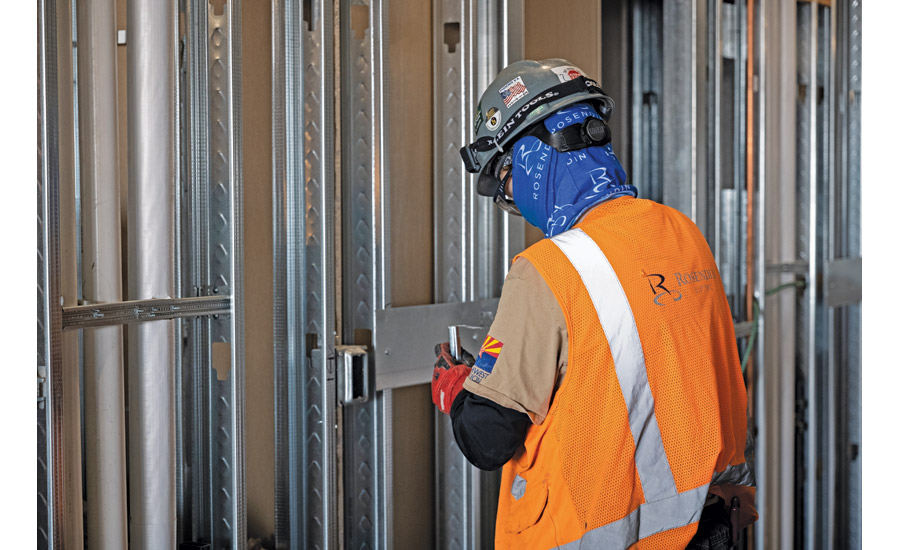 With massive market growth and the strain COVID has put on workforce resources across the industry, Rosendin’s ability to adapt and focus on employee training, safety and morale have been key to the firm’s success.

“Because of the customers we tend to service at Rosendin, we’re a little bit more accustomed to being prepared for those unexpected things to come up, or to quickly change course for a project if all of a sudden we need to add 50 or 100 folks to the job,” Stephens says.

That may not have been seen as a differentiator among specialty contractors in the past, but Stephens says Rosendin has been able to step up at a time when other firms weren’t able to secure the skilled labor they were used to finding.

“If you have your crew sent home on COVID protocol for two weeks, you’ve got to figure it out,” he says. “The job’s still got to get done.”

“We haven’t seen this in Arizona in my career at all, with the number of businesses moving here. It’s not like it’s just one sector—it’s everyone.”
—John Loukusa, Southwest General Superintendent, Rosendin

Jobsite safety is another critical piece of Rosendin’s strategy. In 2020, Rosendin performed 1.4 million worker hours in Arizona and had a total recordable incident rate (TRIR) of 0.57, says John Loukusa, the firm’s general superintendent for the Southwest region. Through June in the state, the company had clocked over 410,000 worker hours with a 0.49 TRIR.

To help maintain its safety record, the company provides all new employees with a “stop work” card, giving them the authority to stop work if they feel unsafe or untrained to proceed with a task. “It really empowers people to make decisions based on the safety of themselves and the others around them,” Loukusa says.

Rosendin has continued to expand its workforce development, particularly in Arizona to support the influx of work in that market. As a supplement to the training received through the International Brotherhood of Electrical Workers, these efforts focus on task-level training, allowing Rosendin to attract potential employees who have little to no industry knowledge.

Rosendin also works hard to foster employee retention and career opportunities. In a new initiative, the firm has started offering a field-office boot camp, consisting of 40-hour structured sessions to provide management with a better awareness of what electricians do. Through a hands-on lab component, office staff members learn how to bend conduit and wire a circuit.

And being a 100% employee-owned company gives Rosendin employees the advantage of having a personal stake in the firm. “Knowing that you actually have an ownership in the company really does a lot as far as the employees are concerned,” Meiers says.

In the community, Rosendin established the Rosendin Foundation in 2020 as a 501(c)(3) nonprofit that assists communities through grant money and volunteering. Rosendin’s employees also take part in regional career days to educate young people about opportunities in the construction industry. The firm will be kicking off several initiatives during the third quarter in conjunction with nonprofit and advocacy groups. 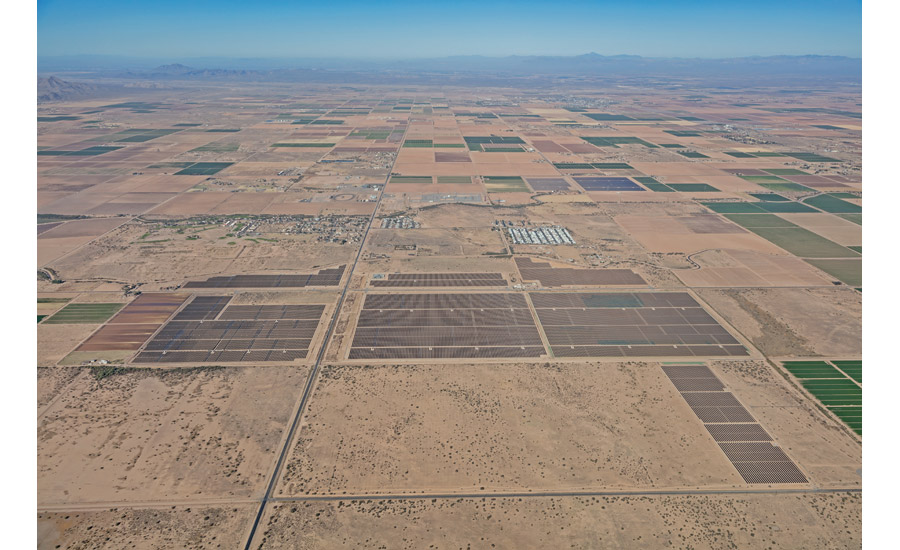 Looking ahead, Stephens foresees continued growth for Rosendin in Phoenix as well as prospects for expanding Rosendin’s footprint in Nevada, where he says the firm is positioned to become the go-to specialty contractor over the next two to three years.

“Hopefully, what you see is a lot of brand recognition that comes and lots of opportunities where we’re able to continue to build the workforce and bring people into this trade who could really help us in the future,” he says.

“There is a tremendous amount of opportunity in the region,” he says. “We haven’t seen this in Arizona in my career at all, with the number of businesses moving here. It’s not like it’s just one sector—it’s everyone.”

Louisiana Contractors Brace for Impact On Labor, Materials in Efforts to Rebuild