This website requires certain cookies to work and uses other cookies to help you have the best experience. By visiting this website, certain cookies have already been set, which you may delete and block. By closing this message or continuing to use our site, you agree to the use of cookies. Visit our updated privacy and cookie policy to learn more.
Home » Summer Bummer Shaping Up as Homebuilders Face Sky-High Lumber Prices
BusinessRegionsMidAtlanticNew EnglandNew YorkCompaniesRisk
Materials Inflation

When Uri Sasson phones in a lumber order for the apartment building his company is constructing in Nyack, N.Y., he is often hit with another jarring price shift.

“Every time I call for delivery the numbers change,” he says. A decline in April provided small comfort considering what’s happened to the overall lumber prices in the last 18 months during work on Sasson’s 33-unit Gateway Lofts apartment building. When you are in the middle of construction, he says, "you really can’t stop.”

Booming house and apartment construction are one economic signature of the pandemic, but lumber’s price surge is causing homebuilders and contractors a market-wide case of agita. Sasson’s development company performs its own construction and he declined to say how much unexpected lumber increases have added to the cost of his long-planned rental project. 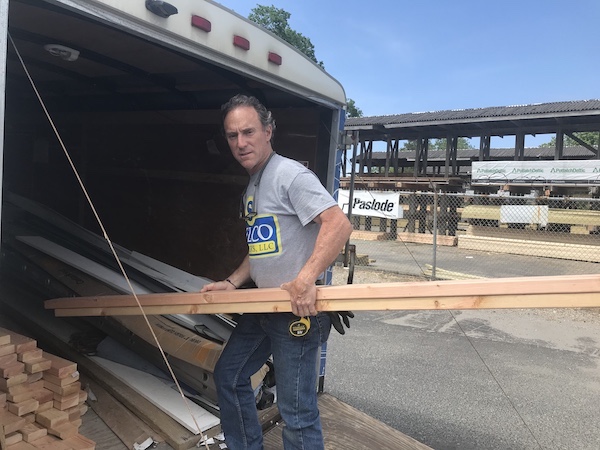 To explain what's happening with wood, economists and market analysts cite imbalance of supply and demand, production cuts at sawmills when prices were lower, trouble ramping up production and shipping woes due to COVID-19.

Others note the combinations of market factors shaping prices. Homebuilders and distributors on the front lines sort these factors, choose the ones that make sense, add a few of their own, and with housing demand setting records, press on with construction.

Previous commodity price leaps have snuck up on construction before. Steel and other commodities are high again, but lumber is the standout in the current inflation cycle.

There are several measures. According to Bloomberg and Wells Fargo, a generic lumber price that was around $600 per 1,000 board-ft in early 2018, has nearly tripled to $1,645 as of May.

A Commodity Lumber Price index calculated by Contract Lumber, a distributor in the Midwest and Southeast, hovered around $950 per thousand board ft—more than three times the company’s annual composite index of $300 in 2019. The average through March, in the words of company blogger Don Dyson, was “an absurd $888 per thousand board feet—and likely to climb.”

According to ENR’s recent cost data, it still is climbing. As of May, plywood is up 89.5% year over year. Overall, lumber prices are up 88.6% in the same period.

Pick Up The Lumber Before It’s Gone

Supply shortages at the retail level seem to be everywhere.

New Jersey builder Mark Seligsohn knows the frustration of telling a client there will be a wait for a multi-family home to be completed. The owner of Selco Builders in Margate, he searches for his lumber anywhere he can at the South Jersey shore and picks it up himself at the lumber yard.

“I want to get it before someone else buys it,” Seligsohn said recently as he lifted wood planks into the back of his truck.

On a recent 90° day, Seligsohn drove his pickup truck from a jobsite in Margate inland to Pleasantville to pick up 20 sheets of drywall and plywood as well as two dozen 2x4 and 2x8 boards.

“People talk that we the builders are making more money but that’s not so,” says Seligsohn. “It’s making it hard for us to finish a house and we make the same even though we pay more for the lumber.” 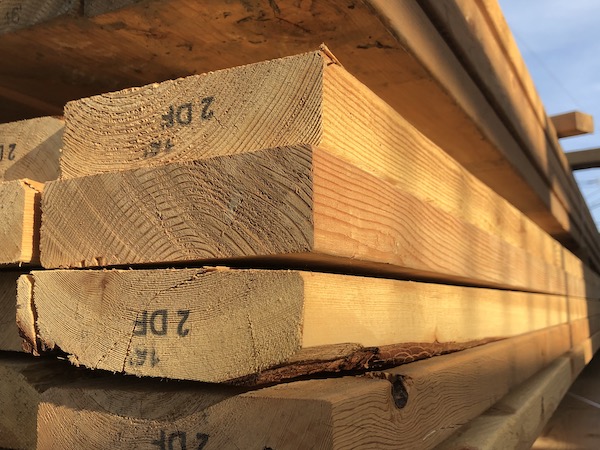 Those types of numbers have set off alarms at the Associated General Contractors and National Association of Home Builders. NAHB says lumber price increases have added $35,000 to the price of an average new single-family home. AGC says lumber prices have nearly tripled since last spring. Although the associations urge Congress and the White House to ease tariffs on Canadian lumber, the Biden administration recently proposed doubling them on many Canadian softwood lumbers. AGC also wants the Biden administration to urge domestic lumber producers to ramp up production.

Seligsohn said he had finished a construction project recently using ¾-in, AdvanTech for subflooring. It cost $24 a sheet last year, he said, but now is up to $64.

Ben Peter, president of Peter Lumber in Pleasantville, N.J., also cites supply and demand and blames labor shortages at lumber mills. As a result, his daily routine with core customers has him “on the phone letting them know what is going on as far as prices.”

“We just anticipated after the pandemic, this would fall off and prices would go back to normal," he said. "But it hasn’t and I don’t know when it will.”

James Kirby, president of Commercial Construction Consulting in Boston and a construction price expert, believes that a shortage of delivery drivers to truck the lumber from fabricators to dealers is a factor. “Trucking right now is the big problem,” he said. “Everything in the supply chain is not back to where it was before the pandemic.”

Others see darker forces at work. 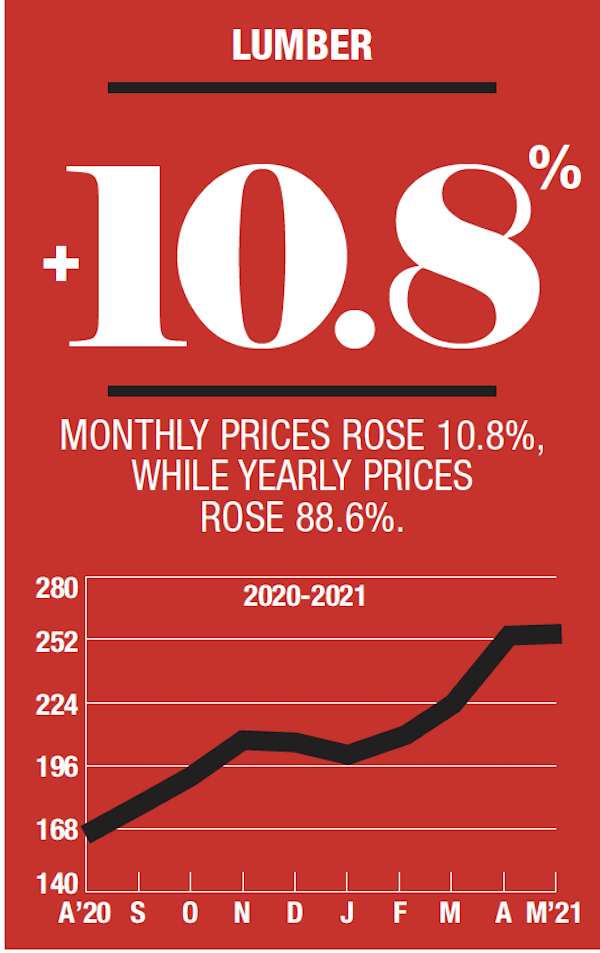 The builders make their case around what they contend is highly unusual pricing behavior they discovered after finding prices last November suddenly tripled. They say they went around to dealers and to Lowe's and Home Depot stores in the Jackson area to determine what was going on, but they found no explanation.

Only a coordinated market manipulation in violation of antitrust laws could explain it, the lawsuit states.

“Defendant likely had to confirm with each other in some capacity because each of these Defendants prices grew at least 10 times the typical cost at the SAME TIME,” the contractors claim.

Without citing more specific evidence, the contractors allege the price hikes were the result of a concerted action by defendants and “that there had to be stock already sitting in the possession of each and every one of these defendants.”

The lawsuit names 10 companies as defendants, including Georgia-Pacific and Hampton Affiliates. Spokespersons for both companies declined to comment on the lawsuit.

Kirby, however, said market manipulation is unlikely and traces the current price spike origins to before the pandemic. He sees the increases continuing until an expected leveling occurs by year's end as the supply chains and other market conditions return to normal. 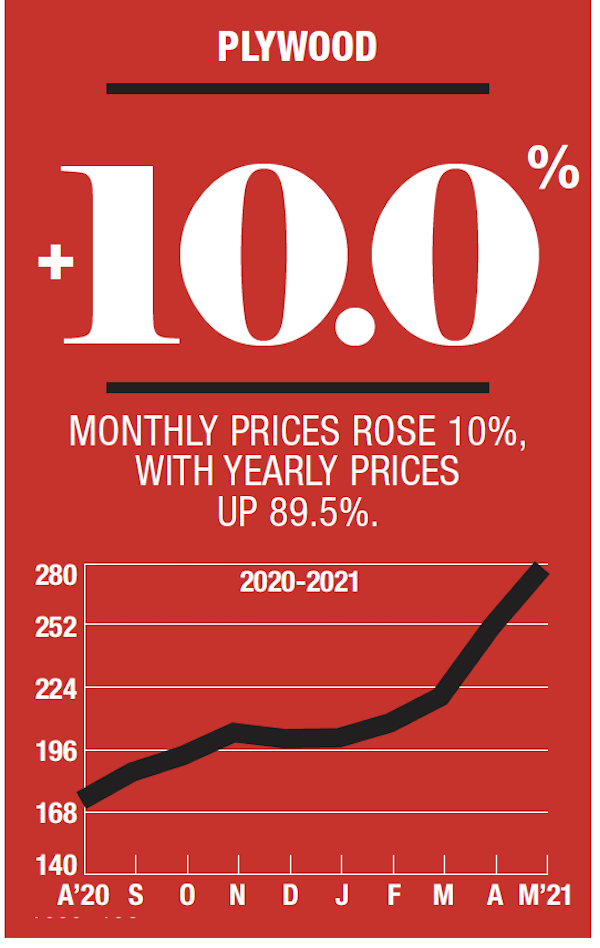 But Kyle Little, chief operating officer at Sherwood Lumber, a New York-based wholesale distributor and former lumber trader, was not so sanguine. “Our belief is that this cycle that we’re currently in ... is here for the foreseeable future,” he said in an interview broadcast on CNBC.

That promises to make life complicated for Sasson and his Nyack, N.Y., project. Because its seismic requirements and “elaborate design” and amenities, Sasson has had to order more engineered wood products than usual—including laminated veneer lumber, engineered truss joists and structural plywood. And according to Sasson, “engineered lumber is a lot more expensive.”

Contract Lumber’s Don Dyson writes that “like other things in life,” lumber pricing is more complex, with each specialty product subject to a pricing dynamic of its own that includes raw material costs, delivery, demand and location.

Back at the Gateway Lofts jobsite in Nyack, Sasson’s project manager was keeping an eye one recent afternoon on carpenters framing another level of the building.

Sitting in the driver's seat of his SUV, the project manager punched the office number into his smartphone, told Sasson’s son that a reporter was interested in talking to them about lumber prices. The project manager ended the call with a request for laminated strand lumber, an engineered, composite product used in wall studs, trusses and other building components because of its strength.

Sasson, who heads Sasson Real Estate Group, has been developing and building north of New York City for 40 years. He is buoyant about prospects for his Nyack apartment project, a special amenity-filled residence with unusually spacious units. He hopes to finish by early spring.

On the subject of LSL, however, Sasson turned a bit glum. He has had more than the usual headaches ordering plywood and wall studs, the main problem, of yellow pine or laminated strand lumber: “LSL we have to get on special order. It takes forever.”

The text of this story was updated 6/8/2021 to reflect proper price of plywood per thousand sq ft.