Don Stanley founded Stantec in 1954 as a one-person environmental engineering firm in a small office in Edmonton, Alberta. Today, it has grown into the fourth-ranked firm on our annual list of Midwest Top Design Firms with $281.3 million in regional revenue.

Now a full-service architecture, engineering and consulting services firm, Stantec has strong revenue in all 11 states in the Midwest region and boasts a client list that includes being a consulting engineer to small towns and counties as well as big cities. It is also the go-to architect for large, multinational corporations such as Walgreens, individuals such as George Lucas and families like the Ricketts, who own the Chicago Cubs. For these and other reasons, Stantec has been named ENR Midwest’s Design Firm of the Year for 2021.

“There are several big firms that have this capability to share work across sectors and across geographies and to some extent it all works pretty well,” says Tom Bader, vice president and regional leader of Stantec who works in the company’s U.S. headquarters in Minneapolis. “But I really do feel that at Stantec it’s a step above. I find people very eager to bring others on board to projects to support their clients. There’s a real interest in reaching out and sharing opportunities.” 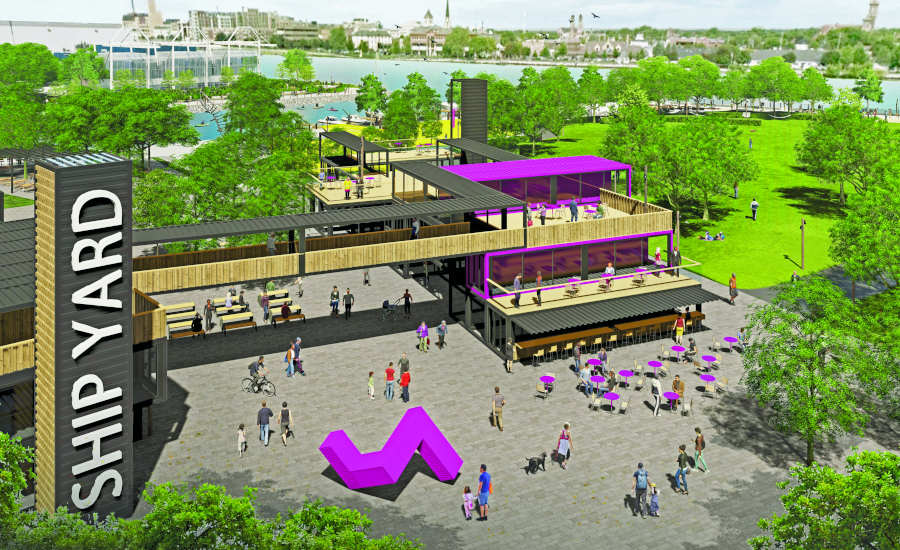 Stantec is working with Green Bay, Wis., to design yearround attractions for visitors and residents. The Shipyard will be anchored by a shipping container park, restaurants, incubator space and start-up businesses.

Stantec was one of only a handful of firms that reported revenue in every one of ENR’s 25 project categories, from manufacturing and power to health care and entertainment.

“We do cover a lot of areas, and I think that’s really the fun part of it,” Bader says. “Not only does it help the company stabilize itself during bad times, when one sector might be up and another down, which is obviously one of the goals with larger firms like ours, but also to share opportunities.” 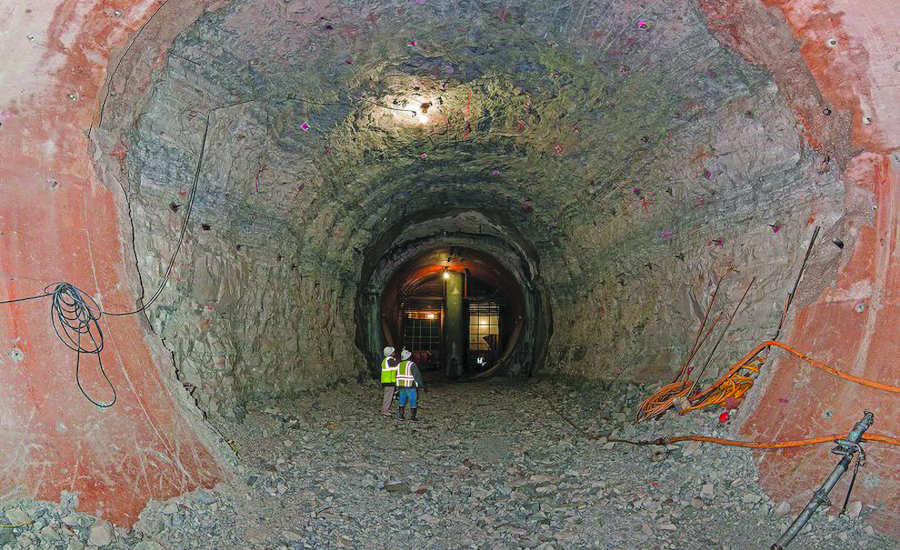 The Thornton Composite Reservoir involved converting an existing limestone quarry into a massive combined sewer overflow facility. It has a storage capacity of 7.9 billion gallons and provides flood control benefits to 14 Chicago communities.

While Stantec ranks near the top of many of ENR Midwest’s regional breakout lists, they were second only to AECOM in water supply projects across the Midwest, with $58.6 million in 2020 water revenue. The firm’s Chicago office is known for delivering projects such as turning the Red Rock Dam in Pella, Iowa, into a hydroelectric power dam and designing the Chicago Metropolitan Water Reclamation District’s ongoing Tunnel and Reservoir Plan (TARP).

Stantec’s urban planners, landscape architects, engineers and scientists are working with Wausau, Wis., to implement a multiphase series of public improvements along more than 2,200 ft of Wisconsin River shoreline.

“We’ve done a lot of work over the years along the Chicago shoreline—improving the access and the protection of Lake Shore Drive there,” says Beth Knackstedt, operations leader for Stantec’s water business for the north central region. “We’ve done a ton of work for MWRD back to the conception of the TARP project. That’s been something that’s been a huge part of our legacy.”

The initial tunnels for TARP went online in 1981, and the last of its three reservoirs, the Thornton Composite Reservoir, went online in 2015. MWRD is still working on the final projects connecting the tunnel and reservoir system for optimal performance. 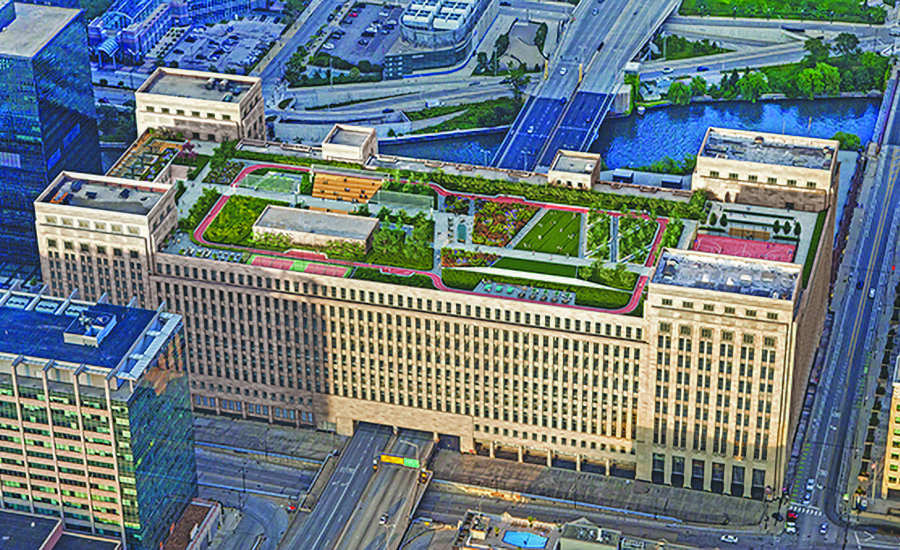 Walgreens’ tech hub office is just one part of the renovation and reconstruction of the 2.75-millionsq- ft Old Post Office in Chicago.

For more than 20 years, Knackstedt has been working on TARP as well as putting her civil and structural engineering expertise to work on a wider variety of projects, including flood control, water supply, navigation and hydropower. She and the Chicago engineering team also worked with Stantec’s Buenos Aires office and other global experts on the expansion of the Panama Canal between 2007 and 2015.

“We had several design centers around the world participating in that design, one of our main ones in Chicago, but we had people from South America out on the west coast, some from Europe,” she says. “It took the best and the brightest from everywhere to come together for that project.”

The Chicago office is leading the preliminary design phase of an alternative water source program for Joliet, Ill., which estimates that by 2030 current supply will no longer meet maximum demand. The $600- to $800-million system will convey purchased water from Chicago to Joliet through a new water transmission system that will include new pumping, storage and water transmission infrastructure to convey finished water approximately 31 miles for distribution through Joliet’s existing system.

On the architecture side, Stantec recently saw its design completed for a 200,000-sq-ft corporate office for Walgreens in the Old Post Office building in downtown Chicago. Stantec, along with Walgreens’ inhouse development group, handled the architecture, integrated building engineering and interior design services on the renovation and rehabilitation. The new space will serve as the technology hub for Walgreens and will ultimately host 1,800 employees.

“One of the challenges there [was that] the floor plates are really enormous because they were where all the mail sorting was happening,” says Joe Cliggott, principal and practice leader at Stantec’s Chicago architecture office. “It was always a challenge of how could you use the space?”

Cliggott says the design includes office benching, a solution that pairs desks and a file storage bench or cabinet; conference and training rooms to create larger common spaces within the overall footprint; and more intimate huddle rooms for small teams. Other architecture projects being delivered out of Chicago include the Lucas Museum of Narrative Art in Los Angeles (a project originally planned for Chicago) and the 1060 Project at Wrigley Field.

Bader was quick to point out that Stantec is still active as a consulting engineer to cities and towns. Mandy Grewal, the supervisor of Pittsfield Township, Mich., talked to ENR about how she chose to keep Stantec, which had been the township’s consulting engineer since 1969, when she was first elected in 2008.

“I did question the fact that we had a consultant here doing the same job for so long, whether or not we should go out to bid and see if we could accrue any financial savings because, you’ll recall, that was also the Great Recession,” Grewal explains. 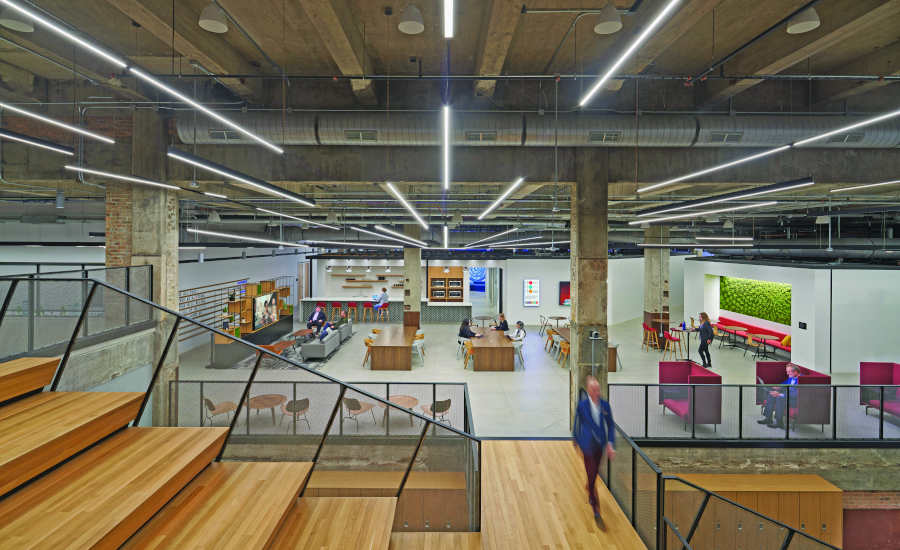 Grewal asked Stantec for a full analysis of all of the services it was providing Pittsfield Township.

“I remember looking at the spreadsheet they provided, and we were looking at some other consulting firms available here locally in Washington County, but both the finances and their performance along with the benefit of accruing vast amounts of organizational memory and experience” were critical in helping Grewal make her decision. “I chose very objectively at the time to continue our partnership with Stantec.”

“Mark Pascoe [principal and practice leader of Stantec’s Ann Arbor office] worked very closely with our team here at the township, and we were successful in completing that project and utilizing grant money which we didn’t have to give back,” Grewal says.